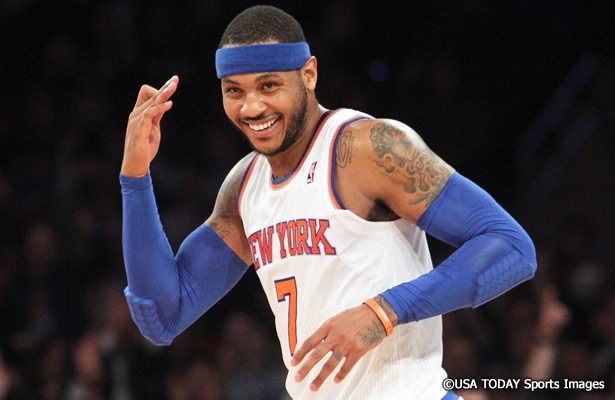 Rockets a Suitor for Carmelo Anthony?

Anthony has free-agent options, and two have risen above everything else: Chicago and Houston, sources with direct knowledge of his plans told Yahoo Sports. The Bulls have an easier path to clear the necessary salary-cap space to sign Anthony, but the Rockets believe they can shed the contracts necessary to offer a third near-max deals alongside Dwight Howard and James Harden, league sources said.

“He’ll give New York every option,” one source with knowledge of Anthony’s plans told Yahoo Sports on Tuesday. “But he has options – and he’s going to explore them all.”

There have now been several credible reports indicating that the Rockets plan to pursue Carmelo Anthony this offseason when he can opt out of his contract to become an unrestricted free agent. Daryl Morey has hit homeruns in consecutive summers by trading for James Harden and signing Dwight Howard, could he grab the offseason’s biggest star for a third straight year?

This is an intriguing option for Anthony, who wants to go where he can contend for a championship. Anthony is nearly 30 years old and doesn’t want to waste any more time on a losing team. If Houston can clear the necessary cap space to offer him a max contract and the chance to play alongside Harden and Howard for the next several years, it would be extremely tempting for the veteran forward. He would be contending as soon as next season rather than having to wait a few years for the Knicks to get out of salary cap hell in New York or having to roll the dice on Derrick Rose’s health in Chicago.

With that said, clearing the cap space to pull off such a move seems like it would be easier said than done for the Rockets. It would likely require them to dump the contracts of Omer Asik and Jeremy Lin. That could prove difficult, especially considering teams weren’t lining up to trade for those players this season when they were shopped and next season is when they’ll be owed significantly more money due to the poison-pill structure of their contracts (although their cap hit will be the same). However, according to Woj, Houston is confident that they can do create the cap room. Would the Rockets be willing to part with an attractive trade chip like Chandler Parsons or Terrence Jones or a first-round pick in order to clear the necessary space to have a shot at landing Anthony? This is an interesting rumor, and definitely something worth keeping an eye on as the offseason approaches.

Andrew Bynum won’t join the Pacers on their trip to New York, but instead will stay in town to treat swelling in his knees that are causing him pain — and to miss games.

“The knees are still swollen so he’s going to stay behind to get some work in here and some treatment here,” Pacers coach Frank Vogel said following Tuesday’s practice. “We’ll see where he’s at when we get back.”

Bynum, who was in practice gear but didn’t participate on Tuesday, admitted there’s some concern for his recent setback. After scoring 15 points and grabbing nine rebounds in exactly 20 minutes of work Saturday night in Detroit, Bynum has experienced significant swelling in his right knee to the point where he underwent an MRI and had it drained Monday afternoon.

“This one is a little concerning for me because it caused a lot more fluid,” he said. “I haven’t had that much fluid in there since like the (2010) Boston Finals in L.A.”

via Scott Agness of Pacers.com

Andrew Bynum can’t catch a break. It has been a rough couple of years for the big man, and now this setback is concerning since it was significant swelling, pain and fluid in his knee. Bynum will remain in Indiana to be analyzed by doctors rather than travelling with the team to New York.

When the Pacers signed Bynum, they knew what they were getting into and understood the risk associated with the center. His knees have caused him problems for years, limiting him significantly when he was with the Los Angeles Lakers, Philadelphia 76ers and Cleveland Cavaliers. However, Indiana signed Bynum anyway because they felt that bringing him in was a low-risk, high-reward move. He wasn’t an expensive acquisition and they figured it was worth seeing if they could get some production out of him.

The Pacers really don’t need Bynum during the regular season, as they have one of the deepest frontcourts in the NBA with Roy Hibbert, David West, Luis Scola, Lavoy Allen and Ian Mahinmi. But having a healthy, contributing Bynum in the postseason would be nice. More specifically, Indiana would love to have Bynum for their expected Eastern Conference Finals match-up against the Miami HEAT. If he can give the Pacers quality reserve minutes in the postseason, the signing will have been worth it. Ensuring Bynum is healthy for the playoffs should be Indiana’s goal, not trying to get the center back in the near future.

Rondo: Celtics Are Playing for Contracts

Rondo to Globe: “For the most part guys are playing for contracts. It’s not a matter of being here. It’s a matter of staying in the league.”

Rondo to Globe: “I want us to all be on the same page. And then when we win, we all win. When we win, everybody gets paid.”

via Baxter Holmes of The Boston Globe

This happens a lot on young teams. When players first enter the league, their primary concern is proving that they belong in the NBA and getting paid. Players will never admit this, but it’s almost always the case. And who could blame them?

In most cases, it isn’t until a player is older, richer and more secure that they start to focus on winning and putting the team first. It’s why most contending teams are comprised of veterans and why most young teams tend to struggle.

The Celtics have eight players who are 25 years old or younger, and a lot of their players are trying to prove themselves so they can get a big payday down the road. Again, it’s hard to blame the players when they aren’t playing for much else at this point, considering the Celtics are 22-46 and clearly out of the playoff hunt in the Eastern Conference.

Rajon Rondo is used to being on veteran teams, where the number one focus is winning. I’m sure this has been an interesting year of transition for Rondo, and this is something that he’ll have to get used to for as long as Boston is rebuilding. As long as the Celtics have young players who haven’t gotten paid and are fighting for their job, playing for contracts will continue.