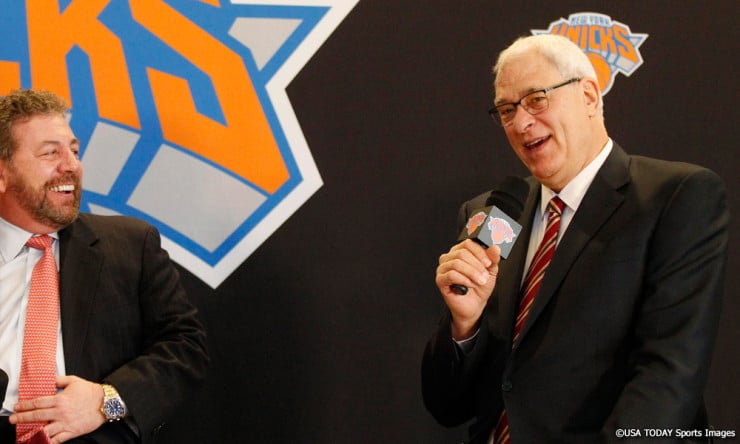 Chandler Fires Back at Phil Jackson

In June, the New York Knicks traded Tyson Chandler to the Dallas Mavericks, along with Raymond Felton, in exchange for Jose Calderon, Shane Larkin, Samuel Dalembert, Wayne Ellington and two second-round draft picks. Knicks team president Phil Jackson explained that the deal, in large part, was meant to address some chemistry issues on the team.

“To do that we felt (it was) important to bring in some new personnel and start with some character guys that we feel can carry this forward,” Jackson said. “Watching them play I saw guys that looked at each other like, ‘You didn’t back me up, you weren’t here when I needed help.'” “There just wasn’t the right combination or feel (where) it felt like everybody was in synch all the time.”

“I did nothing but try to help the culture there the three years I was there,” Chandler said Friday. “You can say I didn’t live up to whatever or you didn’t like the way I played or anything. But to ever question who I am and the type of leader I am in the locker room, I don’t even know where that came from.

“So to judge my character and what I’ve done, you can go look at all my teammates and ask all of my teammates in the past, and the coaches I’ve played for, and I’ve never been a problem and never had a problem. So that was a shock to me that I didn’t appreciate.

“It makes no sense. If you call holding people accountable daily being a bad influence, then hey, I’m a bad influence. But I’m going to be that as long as I’m going to strap up my shoes and step on the basketball court. And that was the big problem there.

“That’s the biggest thing. I guess if that’s why I was a bad influence, because I wanted to do things the right way, then I guess I’m a bad influence. But I’ve never heard of that. I thought that was being a professional.

“You can go to any of the staff members or anybody and ask them what kind of guy I was when I was there, and if I was the guy who was pushing for what is right all the time and they would tell you so,” Chandler said. “That more than anything in my career caught me off guard. I can stomach somebody saying he didn’t produce or whatever, and that’s just motivation. But a shot at someone’s character or professionalism, that’s a little far-fetched.”

Chandler, an NBA champion, former All-Star and 2012 Defensive Player of the Year, is not known for disrupting locker room chemistry throughout his career. However, in January, Chandler publicly questioned former Knicks head coach Mike Woodson’s defensive strategies after losses to the Brooklyn Nets and Indiana Pacers. This led to Woodson confronting Chandler about his criticism.

But Jackson’s comments may have had little to do with Chandler questioning Woodson’s defensive schemes (Chandler wasn’t the only person questioning Woodson’s coaching), or any issues Chandler may have caused in the locker room. Jackson is entering his first season as team president of the Knicks. He has been tasked with turning around a team that was a major disappointment last season, and was in the headlines for all of the wrong reasons. Jackson has made significant changes this offseason, moving Chandler and Felton, firing Woodson, hiring rookie head coach Derek Fisher, drafting Cleanthony Early (34th) and Thanasis Antetokounmpo (51st) in this year’s draft and trading for Quincy Law and Travis Outlaw.

But for all of the changes Jackson has been able to make, he couldn’t ship out all of the Knicks’ disruptive players this offseason. By moving Chandler, a valuable defensive player on an expiring deal, Jackson was also able to get rid of Felton, who was arrested in February for allegedly threatening his wife with a firearm (Felton is suspended for the first four games of the upcoming season after pleading guilty in July to attempted criminal possession of a weapon and criminal possession of a firearm). Beyond his off-court issues, Felton was out of shape and underwhelming on the court last season, and more of a source of problems for the Knicks than Chandler.

While Jackson was able to move Felton by coupling him to Chandler, he was not able to move shooting guard J.R. Smith, who was suspended for five games last season for violating the NBA’s anti-drug program and was fined $50,000 after repeatedly untying opposing players’ shoelaces during games. Smith, who won Sixth Man of the Year in in 2013, struggled last season, and now seems to be a misfit for a Knicks team that has Tim Hardaway, Jr., and Iman Shumpert at the shooting guard position as well. However, Smith, who entered last season recovering from offseason knee surgery, is a very good three-point shooter and underrated passer, making him a potentially good fit in the triangle offense. Nevertheless, if Jackson’s main task was to remove players who cause chemistry issues, moving Felton and Smith would have been his main priority, not Chandler.

Chandler may have contributed to the Knick’s chemistry issues last season, but his main problem was with coach Woodson, who is no longer in New York. For Jackson, moving Chandler, aside from also moving Felton, was more likely about moving him for players and assets before his contract expires, rather than losing Chandler for nothing in free agency. Jackson said as much in June, stating: “We didn’t want to watch another player (Chanlder) go off and not get anything in return, so to speak.”

Also, it must be noted that Jackson is a master of making public statements about players in order to motivate them, or get some other desired result. Here, Jackson may have been looking to put the blame for last season on players who were heading out of town, while relieving the returning players from any role they may have played. But whatever Jackson’s intentions may have been, the notion that Chandler needed to be moved because of character issues are, as Chandler put it, far-fetched.

Recap of Recent Moves Around the League