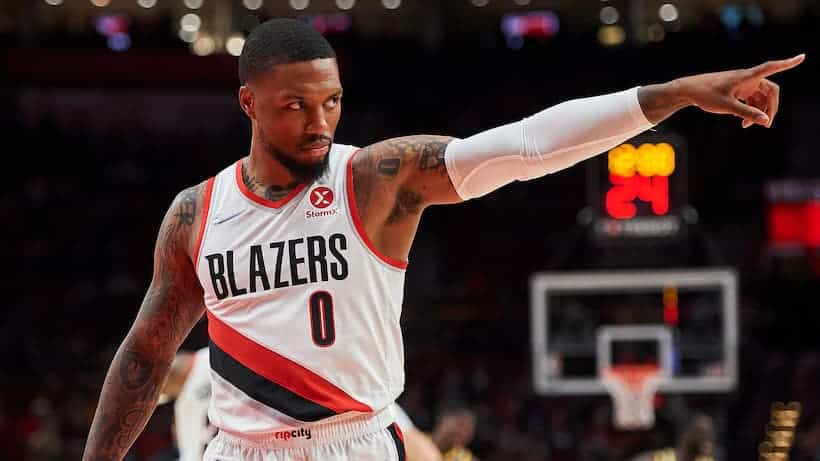 We had some fantastic finishes in the NBA last night. Jimmy Butler’s perfect game from the free-throw line helped Miami escape a close win vs OKC. Donovan Mitchell and the Cleveland Cavaliers lost 116-114 to the Utah Jazz in his return to Salt Lake City. James Harden’s triple-double lead the 76ers in a rout over the Detroit Pistons 147-116. Incased you missed any of last night’s action, here are the top 10 plays from last night’s games.

Early in the fourth quarter of the Orlando Magic vs Portland Trail Blazers game, Mo Wagner pump-faked a three pointer a had a nearly clear lane in front on him to finish at the cup. Wagner exploded to the cup and took off near the restricted area, but was met but Blazers guard Anfernee Simons who got up high to block the dunk attempt. The Magic were able to beat the Blazers on the road. 109-106.

9. Andre Iguodala turn’s back the clock with a two-handed put-back flush

The game was tied 18-18 last night in the Suns vs Warriors game and Klay Thompson took a fade-away jumper that hit off the back of the rim. In perfect posistion for the put-back slam was 38 year old Andre Iguodala who elevated for the two-handed flush. The four-time NBA champion made his season debut for the Warriors last Saturday. Phoenix walked away with a 125-113 victory vs the Warriors last night.

8. Duane Washington Jr. dishes out an alley-oop to Torey Craig for the slam

Phoenix came into their game vs the Warriors last night with a depleted lineup and still found a way to get the job done. With a 14-point lead late in the second quarter, Duane Washington Jr. intercepted a pass and immediately sprinted in transition the other way. He had Torey Craig by his side and threw him a beautiful alley-opp that Craig would finish off for the viscous two-hand jam.

With less than two minutes in the second quarter of the Cavaliers vs Jazz game last night, Jordan Clarkson threw up an alley-oop to his teammate Lauri Markkenan. He finished the alley-oop for a viscous two-handed slam and the Jazz would walk away with a narrow 116-114 win vs Cleveland last night. Clarkson finished the game with 32 and Markkenan with 25 points.

6. Markelle Fultz steals a pass and then elevates in transition for a monster dunk

With a four-point lead in the second quarter of the Magic vs Blazers game last night, number one-overall pick in the 2017 NBA draft Markelle Fultz stole a pass from Portland. He quickly moved the ball in transition and took the ball right to the cup. Fultz split a few defenders and then went up high to throw down a monster slam and he finished the game with 18 points and 7 assists.

With less than 15 seconds left in the fourth quarter of their game last night vs OKC, Jimmy Butler and the Miami Heat needed a bucket to tie the game. Butler took a bounce-pass and took a shot in the post. He was fouled in the process and made the basket. With 12.9 seconds left, he had a chance to put his team ahead by one. Not only did he make his final free-throw to finish 23-23 from the charity stripe, but the Heat as a team also set a new NBA record going 40-40 from the free-throw line.

4. Normal Powell elevates for the flush over Tim Hardaway Jr.

The LA Clippers walked away with a 113-101 victory vs the Dallas Mavericks last night. Norman Powell drove from the corner and elevated for a beautiful flush over Tim Hardaway Jr. Powell played 31 minutes off the bench and scored 27 points in the game, sinking three from beyond the arc.

3. Scottie Barnes works past two defenders for the one-handed slam

Barnes in the reigning ROY, but he’s been having a sophomore slump for the Raptors this season. Toronto were able to get a much needed win last night vs the Charlotte Hornets, 132-120. He used his post moves to separate himself from two defenders where he would then elevate for the one-handed slam over Mason Plumlee.

2. O.G. Anunoby steals the ball and then throws down the tomahawk slam in transition

Mason Plumlee was the victim of two posterizing dunks by the Raptors last night. Defensive specialist O.G. Anunoby stole the ball at mid-court and immediately drove to the basket. The only player left to stop Anunoby was Plumlee and he was not in great position to do so. Anunoby took off on one foot and threw down the tomahawk slam right in the face of Plumlee.

The Blazers were down 11 with a minute and change to go in the third quarter and you knew Damian Lillard was not going to stop fighting. He drove past the defense to the cup and then elevated to the rim. Lillard threw down a dunk and posterized Orlando’s Cole Anthony in the process.