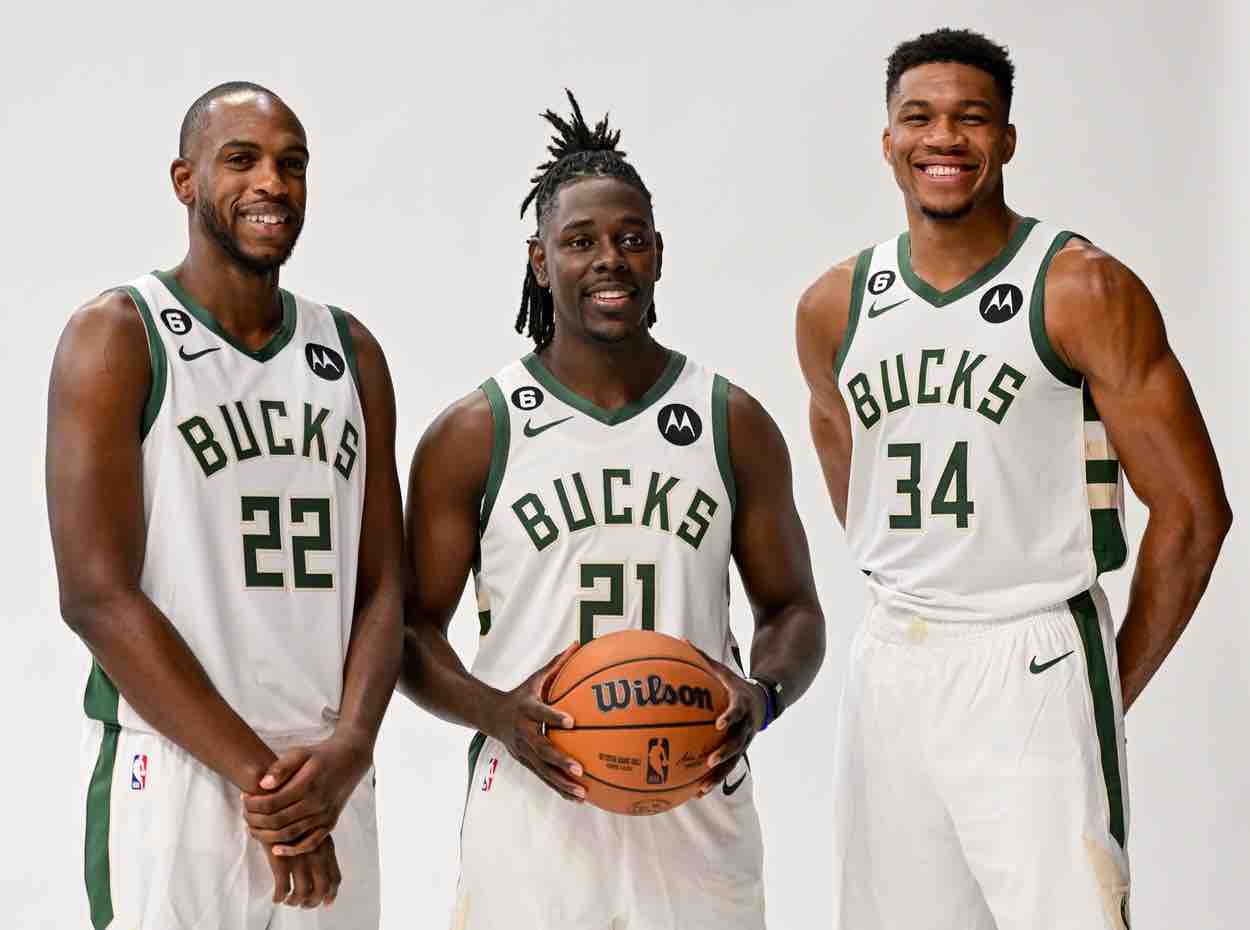 The 2022-23 NBA season is roughly a week and a half in and we’ve seen some teams have a stronger start than expected. There’s also been other teams that have been struggling to get the ball rolling.

Damian Lillard and the Portland Trailblazers are 4-1 to start the season and have surprised a lot of the media and fans. The Miami Heat, who made it to the Eastern Conference Finals last season, and are 2-3 after losing to Chicago, Boston, and Toronto.

We’re still getting a read on certain teams and the top five will likely stay the same until another teams proves their worthy of being there.

The Bucks have jumped out to a 3-1 start after getting a win vs the Nets last night, 110-99. They’re lead by two-time MVP Giannis Antetokounmpo, who’s averaging 36.0 points and 13.0 rebounds through four games. Milwaukee’s offense has been slowed down due to Khris Middleton and Pat Connaughton being sidelined with injuries. Antetokounmpo is more than capable of carrying his team while the Bucks wait to get some assistance back on offense.

Phoenix has had an incredibly strong start to the season after beating three Western Conference contenders in the Clippers, Warriors, and Mavericks. The team is lead by three-time all-star Devin Booker who is averaging 32.5 points per game this season. Chris Paul is still an elite playmaker for the Suns averaging 10.2 assists per game along with a team-high 2.2 steals per. The Suns will look to keep the momentum on their side.

Boston has silenced the outside noise and drama surrounding their team and have started 3-1. Their first in the Atlantic Division right now and look like their just as dominant as they were at the end of last season. Jayson Tatum is an MVP candidate to start the season and is averaging 32.5 points and 8.3 rebounds through four games. The team hasn’t had Robert Williams to start the season and Boston looks like a real contender in the East.

just another day at the office pic.twitter.com/vl26eK36nQ

Ja Morant and the Grizzlies have jumped out to a 3-1 start to the season. He’s averaging 35.2 points and 7.0 assists per game. Morant has been shooting the three-pointer at 60 percent to start the season. Additionally, Desmond Bane is averaging 20.5 points per game and has been a solid second scoring option for Memphis. He could be an all-star this season if his stellar play continues.

The Warriors are .500 to start the season and have had some issues on defense. Steph Curry is averaging 30.2 points per game and is still the clear-cut leader on offense. Defensively, the Warriors have struggled and rank in the bottom half of the league for defensive rating. They’ve also allowed opponents to score at least 70 points in the first half in three of their four games.

Utah is the second team in the last three decades to start a season 3-0 despite being at least seven point underdogs in each game. Leading the Jazz in scoring this season is PF Lauri Markkanen, with 22.2 points per game. The Jazz are a unique team that does not have one unquestionable superstar. Rather, they have a lot of solid basketball players who can help contribute to wins. Jordan Clarkson and Malik Beasley are also apart of the teams early success.

Cavalries fans should be happy with their trade last season for Donavan Mitchell. He’s averaging 28.5 points, 7.2 assists, and 2.2 steals per game. Darius Garland is missing some time and Mitchell does not mind carrying the offensive output. One area the Cavs could improve is by looking to get Evan Mobley more shots in the game. The second-year pro is too good to be playing 32.8 minutes and only scoring 15.0 points per game. Look for Cleveland to work to get Mobley the ball more in coming games.

The Trailblazers are lead by none other than Damian Lillard who’s in his eleventh season with the team. Lillard is a deadly scorer in this league and can heat up quickly. Through five games he’s averaging 31.0 points and 4.6 assists per game. Lillard had back-to-back 41 point performances which were also both wins. Anfernee Simons got a contract extension in the offseason and has played good minutes for Portland. He’s averaging 18.6 points per game which is the second-highest on the team. The Blazers next game is Friday night vs Houston.

Zion Williamson is back for the Pelicans this season and has looked solid to start. He did miss their last game with a hip/back injury, but it doesn’t seem like anything long-term. Williamson and Brandon Ingram both average 22.0 points per game. Along with the 22.0 points per, Zion averages 2.0 stelas per game. Other key contributors for New Orleans are Herbert Jones, sharpshooter CJ McCollum, and Trey Murphy III. You can watch the Pelicans and the Suns play on ESPN tomorrow night at 10:00pm.

Helping each other up so we're not playing down. pic.twitter.com/YanW1D6gOh

When you think of the Denver Nuggets, you see Nikola Jokic. The back-to-back MVP is more than capable of carrying the Nuggets all season long. He’s already had two triple-doubles this season and is now tied with Wilt Chamberlin for most triple-doubles by a center in NBA history. Jokic leads his team in points (22.4), rebounds (10.8), assists (9.4), and steals (1.6) per game. Aaron Gordon and Jamal Murray also play important roles for the Nuggets and can be a factor on both offense and defense.