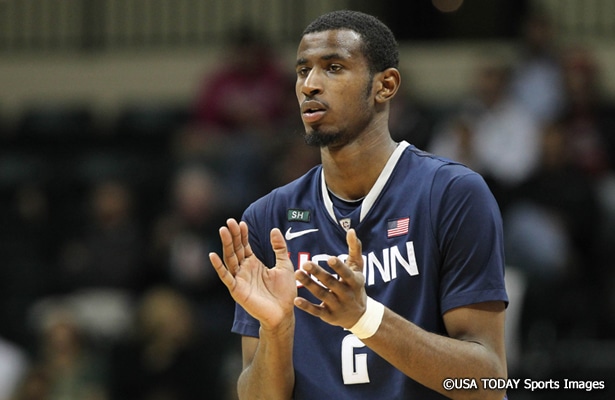 Day six of the 2014 NCAA Tournament is in the books. All four games were decided by five points or less, and we saw Michigan, Kentucky, Michigan State and Connecticut advance.

Which players were studs on day six of March Madness? Basketball Insiders put together a list of the day’s top performers:

DeAndre Daniels, Connecticut – (7) Connecticut was able to pull off the upset against (3) Iowa State, 81-76, and Daniels’ performance was a big reason why. The junior forward contributed 27 points on 10-15 shooting from the field as well as 10 rebounds and two blocks in the victory. He got hot in the second half, hitting his first six shots after halftime and scoring 19 of his 27 points in the second half. Shabazz Napier, who has been excellent throughout the tournament, had another solid game with 19 points, five assists and five rebounds. However, it was Daniels who was the Huskies’ top performer on Friday night, which earns him a place on our studs list.

Julius Randle, Kentucky – Randle is the only top NBA prospect remaining in the tournament, and he continued his impressive string of games to help (8) Kentucky upset (4) Louisville. Randle finished with 15 points and 12 rebounds, which is his 23rd double-double of the season (the most of any Division I player in 2013-14). Randle was excellent down the stretch, hitting clutch free throws, playing strong defense and hitting Aaron Harrison for an important three late in the game. Randle continues to help his draft stock with these games and he’s finally getting the recognition he deserves after being in the shadow of Andrew Wiggins, Jabari Parker and Joel Embiid among others throughout the course of the season.

Branden Dawson, Michigan State – Dawson was a monster during (4) Michigan State’s 61-59 victory over (1) Virginia. The junior finished with 24 points and 10 rebounds, hitting 9-16 shots and 6-8 free throws in the win. Part of what makes the Spartans so scary is that they have a number of players who can step up and lead them to victory on any given night, from Dawson to Gary Harris to Adreian Payne. On Friday night, it was Dawson who shined and put up the most impressive numbers, but this team is a contender because of their balance and excellent coaching from Tom Izzo.

Dustin Hogue, Iowa State – The Cyclones weren’t able to advance, but Hogue deserves a spot on this list because he had the best game of his collegiate career on Friday night. The junior forward had a career-high 34 points, hitting 15-19 shots from the field. He also chipped in six rebounds and two steals in the losing effort. Hogue averaged just 10.9 points during the season, making his 34-point outing even more impressive. Hogue kept Iowa State in the game, since DeAndre Kane and Melvin Ejim struggled, shooting a combined 9-31 from the field.

Jordan Morgan, Michigan – (2) Michigan was able to hold off (11) Tennessee’s incredible comeback thanks to a collective effort. They had six players with nine or more points and their leading scorer, Morgan, had just 15 points. Morgan was very efficient, hitting 7-9 shots from the field. He also contributed seven rebounds, a steal and a block in the victory. Morgan averaged just six points per game during the season, so his performance was somewhat surprising. Nik Stauskas wasn’t as effective as usual, so it took a balanced attack for the Wolverines to get the win over the Volunteers. Fortunately for Michigan, Morgan and others stepped up.