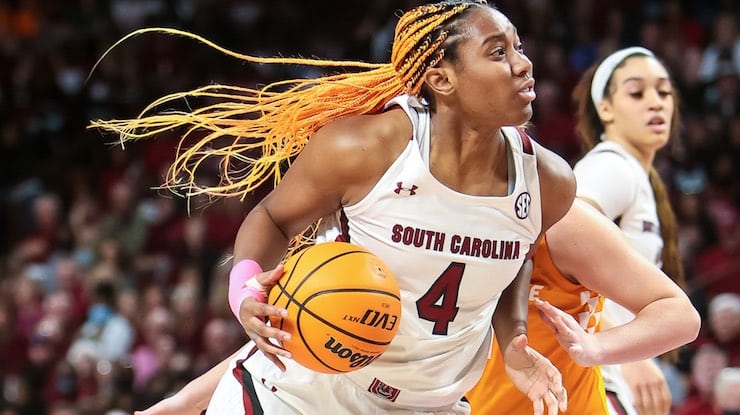 Some of the most powerful women’s college basketball programs are back in the title hunt. With the nation’s best players in South Carolina, Stanford, Connecticut and Louisville, the Final Four will meet at Target Center in Minneapolis on Friday. It’s a familiar Final Four with Stanford, UConn, and South Carolina back in the semifinals again this season. While Louisville fell one game short last year, the Cardinals have a chip on the shoulder heading into Friday. Below, we’ll break our women’s Final Four predictions and the betting odds for each game in the Women’s NCAA Tournament

The powerhouses are back in the Final Four this year. No. 1 seed South Carolina, Stanford, and Louisville, and all too familiar No.2 seed UConn will head to Minneapolis to punch their ticket to the NCAA Championship game. Louisville will take on South Carolina in what looks like a battle of the nation’s best defenses. While Connecticut and Stanford will showcase their starpower against each other in a classic one-and-done format.

All NCAA women’s college basketball odds are taken from BetOnline.

For the latest Louisville vs South Carolina odds, check out the chart from BetOnline below.

South Carolina put together the women’s college basketball record this season at 33-2. The nation’s best defense and overall March Madness favorite, the Gamecocks are led by Aliyah Brown, the Player of the Year. With a suffocating defense and the best player in the country all eyes will be on South Carolina on Friday night.

On the other hand, Louisville has taken the underdog narrative throughout the 2022 Women’s March Madness. While they missed the Final Four last season, the Cardinals put up a tough defense only allowing more than 70 points twice this year. While Hailey Van Lith is having her breakout moment in the NCAA Tournament, the Cardinals will most likely come up short to South Carolina. Take South Carolina to cover the spread on Friday.

Check out the latest NCAA Women’s Final Four odds for Stanford vs Connecticut from BetOnline below.

The defending champions Stanford are one game removed from completing a back-to-back. While their biggest challenge yet will be Paige Bueckers and Connecticut Huskies, the National Champions are currently on a 23-game win streak. Haley Jones and Cameron Brink are two of the best players in the country and are headaches on both ends of the floor.

While Bueckers looked unstoppable in the double overtime win over No.1 seed NC State, UConn will need more from their supporting cast for any shot at the National title. UConn will be making its 14th consecutive Final Four appearance but the Huskies haven’t lifted the trophy since 2016. The Huskies are also 11-10 in Final Four appearances. Look for Cameron Brink to use her size to dominate and finish at the glass with no contest. Take Stanford to win on the moneyline.

The women’s NCAA Championship game sets up a revenge match for South Carolina against Stanford. While both teams are favored to win their Final Four matchups, South Carolina is the team to beat. They have been the best team all year and are attempting to go wire-to-wire as the No.1 seed in the Tournament. South Carolina’s Boston just snapped a 27-game double-double streak and has dominated the circuits all season long. Take South Carolina to win it all on Sunday night.

To place your free March Madness bets on the women’s Final Four, click on the button down below.