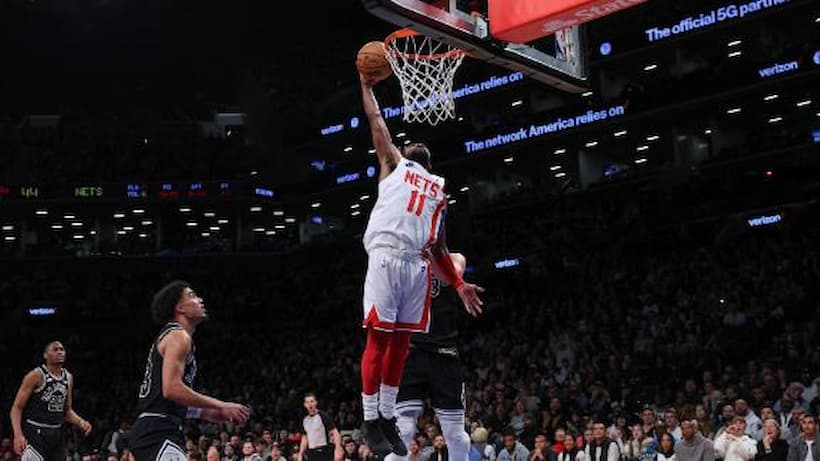 The Brooklyn Nets have been rolling for the past month as the team and only lost one game in the month of December. Kevin Durant and the Nets took that momentum into 2023 and beat the Spurs 139-103 for their 12th straight win. He had an impressive 25 points and 11 assists in the game, but nothing in this game would top what Kyrie Irving did. His teammates didn’t even know he was capable of his epic highlight.

Brooklyn’s Yuta Watanabe took a jump shot that missed with 8:59 left in the second quarter. Kyrie Irving was already having a stellar start to the game after he made his first seven shots, but what he did next was special. He tracked down where Watanabe’s missed rebound would be and caught the rebound in the air for a put-back slam!

Irving is not know for his leaping ability and very rarely will dunk the ball, let along throw down a put-back dunk like he did last night. Barclay’s Center erupted and the Nets bench couldn’t contain their excitement. Spurs head coach Greg Popovich immediately called a timeout and Irving’s teammates couldn’t believe what they saw. New York Sports Betting sites have the Nets at (+750) to win the Finals this season.

KAI BROUGHT THE HOUSE DOWN pic.twitter.com/oAmqrl7az3

The NBA and it’s fans are well aware of the special talent that Kyrie Irving is. He’s without question one of the most gifted scorers that the league has ever seen. What he did last night was truly amazing and nobody could have predicted he would do that.

Irving has a career full of amazing highlight’s and some of his biggest shots have come in clutch moments. The put-back dunk from yesterday’s win has to be up their with one of the his best ever. He had this to say to the media about that special dunk.

“On a serious note I’m glad I can have those type of plays at times to galvanize the group. Glad it went in. Good timing,”… “I’ve been working on my body for the last year and a half two years especially recovering from that traumatic ankle injury I had during the 2021 playoffs. I just felt like I didn’t have my feet underneath me at the end of last season, so coming into this season, I definitely put an emphasis on being more on my toes and getting stronger and my foundational base.” – Kyrie Irving

We see you @KyrieIrving!

He says his teammates have joked with him in the past about his athleticism and the dunk he showed them last night probably silenced all the haters. All of Irving’s teammates immediately jumped out of their seats on the bench and couldn’t contain their excitement.

The 12-game win streak has been fun for Brooklyn and winning solves everything in sports. Brooklyn have the second best record in the NBA right now behind the Boston Celtics. They have just a one-game lead over the Nets in the Eastern Conference standings.