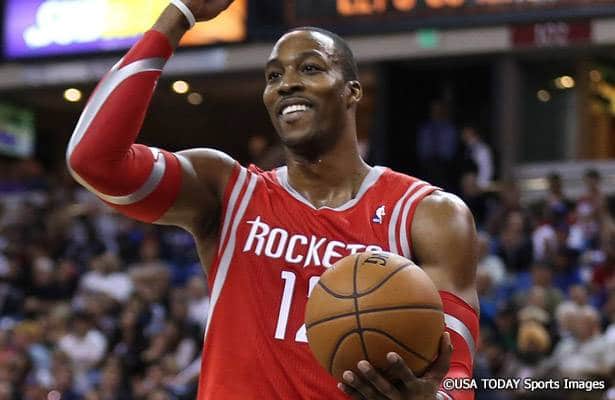 As the clocks ticks closer and closer to the trade deadline at 3 p.m. ET on February 20, players around the NBA will grow increasingly anxious to find out if they or those around them will be moved to another team.

Some have been told they could be dealt, others have only heard things through the rumor mill. The majority will stay put, but some will be caught off guard by trades.

Several NBA players shared their trade deadline experiences with Basketball Insiders. Whether they changed uniforms, watched their teammates leave, or were not affected at all, they have unique experiences and perspectives into the day when anything can change.

Read the complete article in the Basketball Insiders digital magazine.

Dwight Howard: “For me I think it was different from a lot of players. A lot of attention was on me and what teams were going to do that day. It’s tough. You have everybody asking what’s going to happen, what you’re going to do, all that stuff. I had a big headache and I was just happy when it was over with. … You can’t help but look at the clock. It’s a tough situation for anybody. Some guys have talked to me about what has happened to them in the past. They’ve been on a plane, got off and they’ve been traded to a new team. It’s tough. … I thought the Brooklyn (Nets) thing was going to come through at the end of the season. It was something that was promised but it didn’t happen. Once it didn’t happen I figured everything happens for a reason. I just let it go. I was upset for a while but I just let it go.”

Chris Kaman: “Initially my first few times (being mentioned in trade rumors) it was kind of stressful. I didn’t know all the ropes, I didn’t know how to respond, I just didn’t know anything about it. I was wet behind the ears and didn’t know what to anticipate or what to expect, so I was kind of in a panic all the time until it didn’t happen and then the deadline came. Now it’s like, if you want to trade me, that’s fine, that’s part of the business. I’m kind of ready for it if it happens. Now I don’t think about it anymore, I just play. You can’t worry about that stuff. If you worry about that stuff, you’re going to go insane if you think about it. … The hard part is looking at it with emotions and as a person is trying not to get your feelings involved because that’s the worst way to do it. But still you have a vested interest a lot of times and it’s not easy to just be numb to it and be like a robot.”

Kyle Lowry: “I was traded from Memphis to Houston (on the 2009 trade deadline). It was an interesting experience. When I got traded, Hakim Warrick called me and told me because it happened right on a deadline special. I knew something was going to happen. Actually, earlier in the day they said nothing was going to happen, and then it when it happens it was like (claps hands). It was tough because I had my boys and I had a nice little house there. It’s hard because you literally have to pack a couple big bags and get on a plane that night. … (Being traded early in my career) makes you see it as a business. It makes your mindset realize anything can happen at any time and you can’t get too comfortable in a situation. Hopefully you find a home in a place where they accept you and want you for your career, but the likelihood of that is very slim. You go to your next city, do your best and move on.”

Ronnie Brewer: “Even though you sometimes get traded, there could be a lot worse things. You go from one NBA team to another. It’s not like you go from one team to not playing something you enjoy and love doing. I’ve had a good experience on the deadline and one of the worst on the trade deadline. One time (in 2010) I was on the Utah Jazz and we were about to take off and I had to make them stop the plane. I was on the phone with the GM and he was like if I didn’t stop the plane I would have to fly to Golden State, get off the plane, get right on another plane and fly to Memphis because [the Grizzlies] wanted me to play that next day. I had to wait there until all of my bags were off. It took 45 minutes to an hour and everybody was texting me. That was pretty bad. Another time, last year I was in New York and it’s never good to get traded but I had a chance to say goodbye to my teammates and spend some time with them, talk to them, and then go to a good potential contender in Oklahoma City and be around that organization. That was a great experience. It’s important to be able to say goodbye to your teammates because you go through so much with them, they’re almost like family because you travel with them day in and day out. They spend birthdays with you on the road, holidays with you on the road. They go through blood, sweat and tears with you. You go through joys by winning, you go through sadness from losing. When you see one of your teammates get traded or get hurt, you feel some type of way about it.”

Steve Novak: “It’s usually your friends that get traded, for whatever reason. This time it was (in the Rudy Gay trade). Everybody says it’s a business, and we like to say that. But the truth is, it doesn’t change the day to day, the real friendships that you have. Just think about what you do for work – the workplace and the friendships that you build. One day, usually very unexpectedly, three people just get shipped out to another state and they have two days to get there. It’s not like they’re going to hang for a while and say goodbye. It’s never easy. It’s the guys you got to dinner with on the road. It’s the guys you literally spend 10, 12 hours a day with and then they’re gone. The guys that come, in you never know how they’re going to be. The truth is, this time the new guys ended up being the ones I go to dinner with. Sometimes it works out great, other times it’s hard on guys and they lose a brother.”