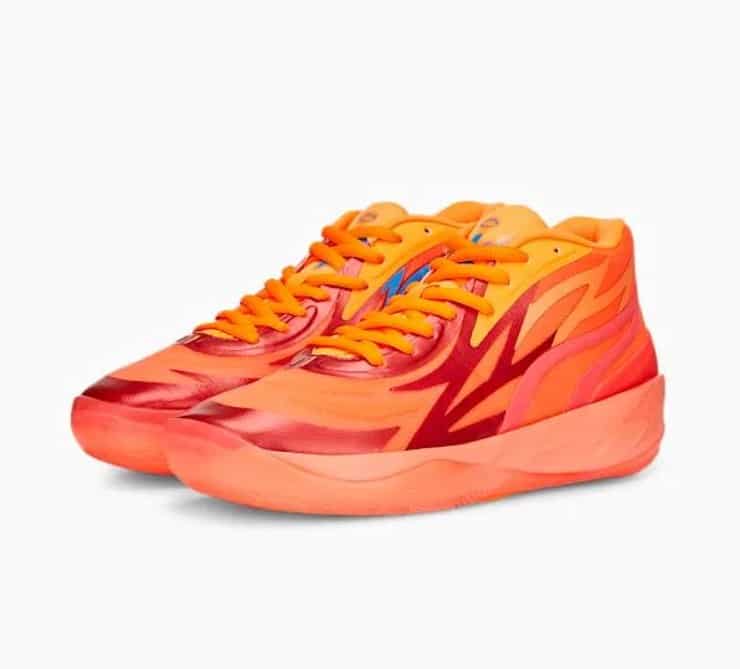 The sneakers will be available to purchase through Puma.com, Champs Sports, Foot Locker, and Puma NYC. Ball’s second signature sneakers feature colors ranging from bright orange to a slight hint of red, yellow, and blue.

A few NBA betting sites are giving LaMelo Ball the 10th-best odds to win NBA Most Improved Player of the Year in 2023. But some sportsbooks are expecting the Charlotte Hornets guard to finish at the top.

The “Supernova” MB.02. Going for a ride thru the galaxy with @MELOD1P on Oct. 21. pic.twitter.com/LxecymIPTH

For constructive feedback, the verdict is in on the new Puma shoes. According to social media posts, people despise the design of the sneakers. Some folks have compared Ball’s shoes to Doritos and Hulk Hogan’s red/yellow outfit.

However, everyone is a critic. It’s all a matter of opinion. Ball’s fans are still excited to purchase his new sneakers next Friday. Puma executives are expecting the shoes to sell out fast.

On August 31, 2017, Big Baller Brand, a sports apparel company launched by the Ball family in 2016, released a signature shoe for LaMelo known as Melo Ball 1 (MB1).

At 16, he became the youngest athlete to ever have a signature shoe.

In 2020, Ball signed an endorsement deal with Puma. By default, he could no longer promote Big Baller Brand. Since then, reviews on his shoes have been mixed — evident by the posts above.

He won NBA Rookie of the Year and was named to the NBA All-Rookie First Team. His success on the court will help him sell Puma merchandise.

Additionally, Ball will now wear the No. 1 jersey. He played his first two NBA seasons with the Hornets while wearing the No. 2 jersey.

The guard wore No. 1 while with the Illawarra Hawks of the National Basketball League (NBL). And he wore No. 1 with BC Prienai, a professional basketball club based in Lithuania.