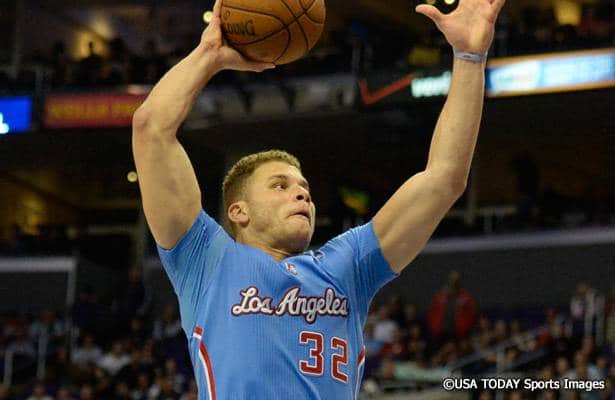 When the Los Angeles Clippers decided to hire Doc Rivers as their head coach and VP of Basketball Operations, we all knew it would come with some lofty expectations. Even though they’ve had several key injuries, they’ve found a way to stay within just a few games of the Western Conference’s top teams through the first half of the season.

#1 Blake Griffin is far from “just a dunker” if you hadn’t noticed.

If the phrase, “all Blake Griffin does is dunk” has come out of your mouth this year, then you simply have not been watching the young man play. Not only has he increased his range and clearly worked on his post game, but he has also developed into a player that can put the ball on the floor and become an above-average playmaker for a man of his size and position. He still has room for improvement as a rim-protector and on-ball defender in the post, but has even made significant strides in that department in his fifth season.

Those that don’t care for him, whatever their reason(s), will likely find ways to dismiss his progress, but that doesn’t make it the reality. The truth is, while Chris Paul is clearly the verbal leader of the team, Griffin’s progression has placed him alongside his point guard as one of the team’s leaders in terms of productivity and overall impact. Make no mistake about it, he can and will still dunk on an entire front line if they are foolish enough to get caught in his path once he takes off, but that’s no longer his only means of scoring.

#2 DeAndre Jordan is one of the most improved players in the NBA.

Not only did the organization reportedly attempt to move Jordan for more proven and familiar veteran leadership in the form of Kevin Garnett during the offseason, but he was openly questioned by many as the definitive “weak link” on the team once it was established the transaction would not be permitted by the league. Likely due to a combination of being motivated by this fact and partly as a a result of Coach Rivers’ influence, but Jordan has looked like a new man for the Clippers in 2013-14.

He’s averaging just about double-digit points (9.7 PPG), and well over that mark in rebounds at 13.7 per contest. He’s nearly doubled his rebounds per game average in just one season, having averaged just 7.2 per game in 2012-13. Even though his free throw percentage (40.3) is clearly still abysmal, he doesn’t take enough (4.1) for it to truly have a negative impact on most games. More than anything, this team needs him to clean up the offensive glass and be a rim protector on the other end. At third in the league in blocks per game (2.5), he actually has the most blocks on the season with 110 through 44 games played. Jordan’s stock is definitely on the rise, as he finally appears to be developing into the player this team has sorely lacked.

Although it is never a good thing to be without a guy like Paul, as stated, they’ve found a way to make up for his absence from within. Guys like Darren Collison and J.J. Redick have increased their playmaking, but we really have to reiterate just how well-rounded Griffin’s game is becoming. While providing just around his career average (3.5 APG) on the year, through eight games of Paul’s absence, Griffin is right around 5.4 APG from the power forward position. This team is only likely to go as far as a healthy Paul takes them, but it must feel good to know they can still compete in his absence from an overall team confidence perspective.

J.J. Redick has done a phenomenal job serving as the “Ray Allen” role in the offense. While there may have been questions about the acquisition upon first finding out, Redick has more than quieted any such doubts. Through varied forms of motivation and due to their dedication to being the best they can be, the young front line of Griffin and Jordan has developed into one of the better big man duos the league currently has. The next challenge for Rivers will be continuing to further solidify the team’s defense. While they can block shots, shoot the passing lanes for steals and lock in at times, in order to ultimately be successful they’ll need to find a way to provide the same effort and dedication to schemes and basic defensive principles on a more consistent basis.

#5 If healthy, they can be a contender in the Western Conference.

While we certainly wouldn’t consider them the overall favorites, the Clippers have shown the ability to compete with the other Western Conference elites. With a 7-5 record against teams currently in (WC) playoff positions, including a road loss to the Spurs the game following their loss of Paul to the injury, they appear to be a team building the type of momentum and confidence it takes to translate that success into the postseason.

They’re one of the highest scoring teams in the league averaging 105.8 points per contest, but are just 14th in points allowed (100.2) per game. Even though that clearly isn’t the worst in the league, you’d have to imagine Coach Rivers would feel more comfortable if they were able to shave a few points off that average and find a way into the top 10. As we’ve seen in recent years, once the playoffs begin for the Clippers, it will be about making enough plays on both ends in order to compete; and this year will be no exception.

#6 Although very deep, you can never have too many playmakers.

Much of the reason the Clippers have struggled in the last couple playoff runs is due to their inability to make enough plays in the crucial and waning moments of ballgames. The Grizzlies have been one of the better defensive teams over that stretch, so it should come as no surprise they’ve been the Clippers’ Achilles heel. While Vinny Del Negro was criticized for perhaps having relied too much upon Paul isolating or even coming off a pick at the top of the key in signature moments, Rivers has the regular season to not only develop more complex offensive schemes, but also find additional playmakers he can trust when the pressure is truly on.

It appears Rivers has already toyed with the idea of permanently replacing Jared Dudley in the starting lineup with Matt Barnes; leaving a plethora of shooters, but very few slashers and rim attackers along the perimeter in that second lineup. Darren Collison has been a very positive addition, and (for the most part) has filled in admirably for Paul. With that said, the thought of developing or even adding one more perimeter ballhandler and playmaker by the time the playoffs roll around certainly wouldn’t be the worst of ideas.

Only time will tell whether this team can stay healthy enough to compete come playoff time, but Rivers and company definitely appear to be on the right path. Sometimes, the best deals are the ones that never transpired, as Clippers fans have to be happy both Jordan and even the recently-rumored Griffin are still in the red, white and blue.