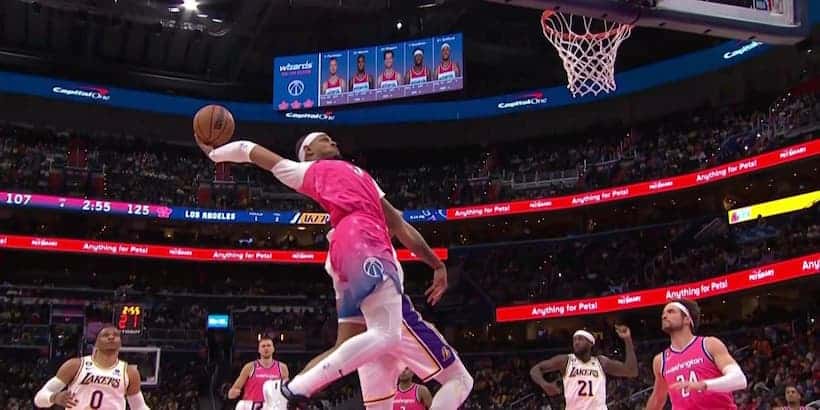 We’ve had an exciting 2022-23 NBA season thus far and it’s been packed with some thrilling finished. The top teams in each conference are starting to separate themselves from the rest just over 1/3 into the season. Three’s and jump shots are efficient ways to win a basketball game, but what draws in the fans and outside viewers are the insane dunks that these athlete’s are able to do. Dunks are a bit more rare now a days than seeing a three-point shot just because not every player can dunk.

Next, we’re going to take a look at the top 5 dunks of the 2022-23 NBA season thus far and see who ranks the best in this holiday season. There are some names on this list who you’d likely expect, but there are also some others who have put up a monster dunk this season.

Early in the season on 10/21, the Utah Jazz beat the Minnesota Timberwolves 132-126. In that game, Lauri Markkenan drove to the basket after receiving a nice pass. He jumped of two feet and extended him arm out over the elite defender Rudy Gobert and threw down a one-handed slam in his face.

The Boston Celtics and Cleveland Cavaliers met early in the first few weesks of the season twice and the Cavs won both matchups in OT. In their first meeting on 10/28, Donovan Mithchell faked a jump shot and had a wide open lane to the basket. Backup PF/C for Boston Luke Kornet tried stepping in front of Mitchell and got caught on the tracks. Mitchell threw the ball back with one hand and obliteried Kornet.

In an matchup between the Dallas Mavericks and the Milwaukee Bucks, Luka Doncic had an epic dunk. Luka had a breakaway down the court and only one Milwaukee player was is his way. Jrue Holiday is an excellent defender and he did everything he could to try and block Doncic’s dunk attempt. He was unsuccessful and Luka absolutely posturized Holiday.

Myles Turner is certainly known to be a high flyer and he did this about a month ago vs the Timberwolves. His team lost 115-101, but he left them with a dunk to remember. Turner took one dribble at the top of he key and then proceeded to take off and throw down a viscous slam on a Pacers defender.

Just last week, the Washington Wizards were in LA to face the Lakers. Washington fell just short in the game 119-117, but Daniel Gafford threw done one of the best dunks of the NBA season so far. Gafford took an alley-oop lob from Korey Kispert and threw down a tomahawk slam over Anthony Davis.