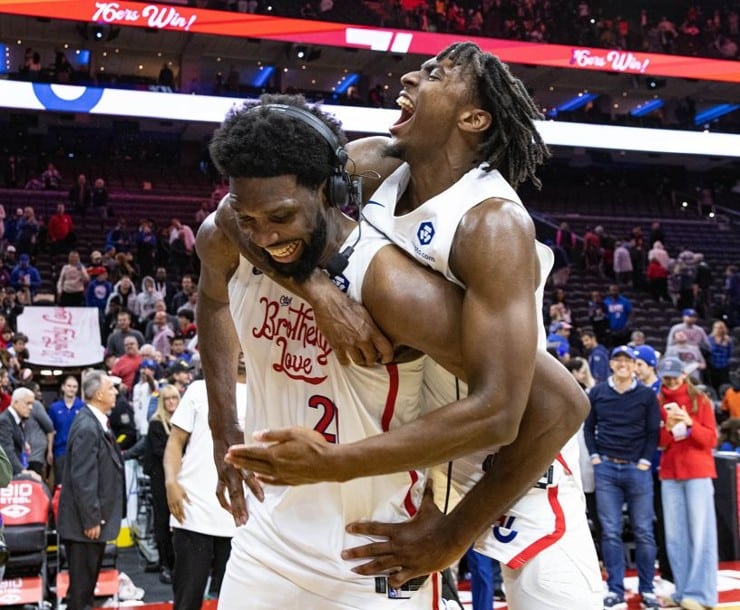 Watch Joel Embiid score a career-high 59 points in the Philadelphia 76ers’ 105-98 win over the Utah Jazz on Sunday night. In the Sixers’ seventh win and the center’s seventh double-double of the season.

According to some NBA betting sites, the 76ers center has the fifth-highest odds to win MVP in 2023. Check out which sportsbooks are giving Giannis Antetokounmpo, Luka Doncic, and Jayson Tatum better odds. Watch Embiid’s highlights below.

The five-time All-Star scored 26 of the Sixers’ 27 points in the fourth quarter alone. “My teammates knew who had the hot hand and they just had to feed me,” Embiid said after the win.

While the center’s performance was legendary, he scored only the fifth-most points in a single game in franchise history. Wilt Chamberlain holds the first three spots: 68 in 1967, 65 in 1966, and 62 in 1966.

“Those are two legends that played here that I respect a lot and to be in that company means a lot,” Embiid said when asked about the Sixers legends. “I still got a long ways to go.”

Per ESPN’s statistical database, Embiid is the first player in NBA history to record at least 50 points, 11 boards, 8 assists, 1 steal, and 7 blocks in a game since blocks first became an official stat in the 1973-74 season.

Watch a segment of his postgame interview below.

"To be in that company means a lot, but I still got a long way to go."

After scoring 59 points over the Jazz on Sunday and 42 versus the Atlanta Hawks on Saturday, the center became only the third player since 1988 to put up 100 or more points in back-to-back contests.

Furthermore, the 76ers are now 7-7 and rank sixth overall in the Eastern Conference standings. On Friday, the Sixers play the Milwaukee Bucks at 7:30 p.m. ET. That matchup will air live on ESPN. To watch other highlight videos, go to the main page.