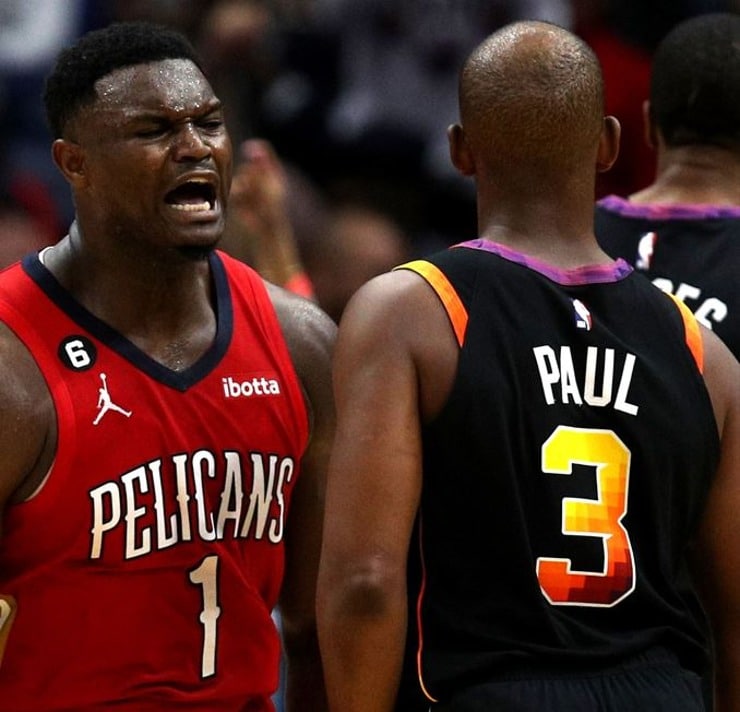 Watch as Zion Williamson performs a 360 dunk with 1.9 seconds remaining in the game, leading to the benches clearing in the New Orleans Pelicans’ 128-117 win over the Phoenix Suns on Friday night.

After Larry Nance Jr. rebounded the ball in what should have ended the game, Williamson decided to go for a spectacular wide-open dunk as the crowd cheered him on. Announcers were amazed that the New Orleans forward did not run out the clock to end the game.

According to a few NBA betting sites, the Pelicans now have the 10th-best odds to win the championship in 2023. Check out which sportsbooks show better odds for the Suns and Denver Nuggets. Watch the scuffle below.

Instead, Williamson’s 360 dunk only angered Phoenix players, leading to both benches clearing after the buzzer. Suns guards Chris Paul and Cameron Payne met Pelicans guard Jose Alvarado at center court prior to security separating them.

“The game was pretty much over, and they just kept playing,” Payne said. “I felt like there was just no sportsmanship, and we don’t really like that.

“We do the right thing. I felt like they should’ve done the right thing, and they didn’t. We didn’t take it well, and we don’t like to lose either. The game was over, no shot clock. They can hold the ball.”

Watch how Zion Williamson’s 360 dunk led to a scuffle, benches clearing in the Pelicans’ 128-117 win over the Suns

As Paul began to walk off the court, Alvarado went back to the 12-time All-Star to exchange a few more words. “He got something with C,” Payne added. “He just tries to get at C.”

New Orleans players were upset for a different reason. During the first round of the 2022 NBA Playoffs, the Suns defeated them in six games, and they won their final game to advance to the Western Conference Finals on the Pelicans’ home court.

“Yeah, there is tension there all the time,” said Alvarado after the game. “We hated that they beat us on our own floor [in playoffs]. Every game we play against them is going to be physical and really locked in. It’s always going to be a playoff game for us.”

Following the win, Zion Williamson felt his dunk was unnecessary, considering New Orleans already had a nine-point lead. The Pelicans forward ended his performance with a season-high 35 points in 37 minutes of action.

“That was a little out of character for me,” explained Wiliamson after the win. “But you gotta understand, they sent my teammates home last year… But I was in that locker room, my brothers was down because the Suns sent us home last year.”

Zion Williamson missed all of last season due to a foot injury. Last December, he underwent medical imaging which showed a regression in the bone healing of his fifth metatarsal.

Meanwhile, Deandre Ayton left the court as time expired, and the center seemed unflustered by Williamson’s 360 dunk. “It’s a home court,” Ayton said. “He’s doing it for his fans. I don’t take any of that stuff personal. I worry about postgame when it counts.”

To watch other highlight or postgame videos related to Zion Williamson and the Pelicans, go to the main page.