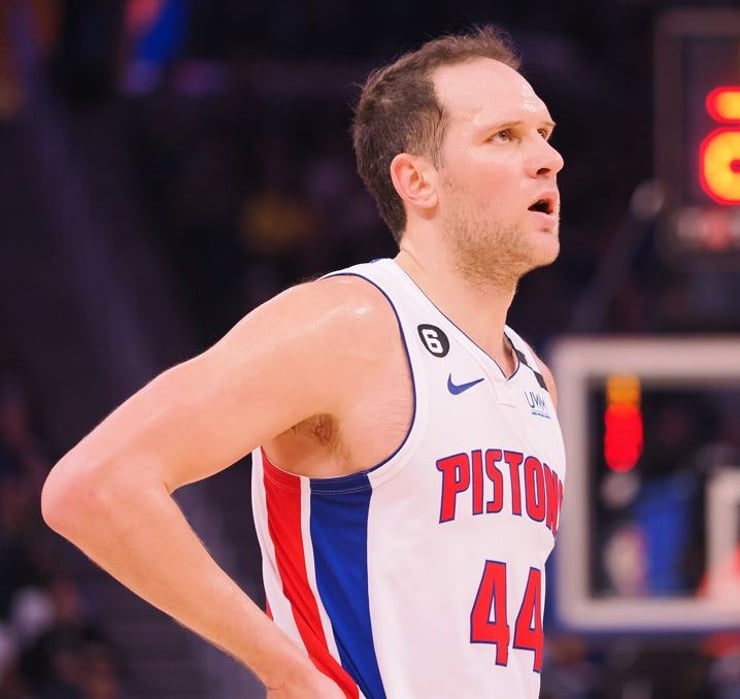 On Monday, the Los Angeles Lakers traded Kendrick Nunn and three second-rounders to the Washington Wizards for Rui Hachimura, so will the team also make a move to acquire Detroit Pistons wing Bojan Bogdanovic? It’s a possibility. The NBA trade deadline is Thursday, Feb. 9 at 3 p.m. ET.

“Detroit’s Bojan Bogdanovic continues to be the name most often tied to the Lakers in league circles, but the Pistons are looking for an unprotected first-round pick, at a minimum, in a potential trade, according to league sources,” said Jovan Buha of The Athletic.

According to a few NBA betting sites, the Lakers have 10th-best odds to win the championship. A number of sportsbooks are showing greater odds for the Memphis Grizzlies and Los Angeles Clippers.

I like the Lakers trade for Rui Hachimura. He’s long, athletic, and smart but has to get more aggressive on both ends of the court.

“The Lakers’ preference is to only give up a lottery-protected first for the 34-year-old Bogdanovic, though that could change when up against the trade-deadline clock,” added Buha.

After trading for Nunn, the front office might as well negotiate a trade for Bogdanovic. If the team is in a win-now mode, G.M. Rob Pelinka knows he has a short window at this point with LeBron James, Anthony Davis, and Russell Westbrook. This could be Davis and Westbrook’s last season with James.

Will the Lakers offer a trade package to Detroit for Bojan Bogdanovic prior to the Feb. 9 deadline?

Through 46 starts this season, Bogdanovic is averaging career highs of 21.5 points and 2.7 assists per game. Plus, he’s shooting a career-best 49.1% from the floor and 42.3% from 3-point range. Having both Hachimura and Bogey would strengthen the Lakers’ frontcourt.

Contrary to popular belief, James is not thinking about next season. The four-time MVP is now 38 years old. If he can compete for another championship this season, that sounds more ideal than waiting it out another year. Considering the number of injuries this team is working around, trading for another top scorer is imperative.

Bogdanovic has appeared in over 70 games in multiple seasons throughout his nine-year career. Hachimura, on the other hand, has struggled to stay healthy since the Wizards selected him ninth overall in the 2019 NBA Draft.

Here's another trade the Lakers could pull off to follow up the Hachimura trade.

Additionally, it would benefit the Lakers to trade for a forward who’s posting career-high numbers. Besides losing at least one of their first-round draft picks, a downside to trading for Bogdanovic is his age.

The soon to be 34-year-old is playing great this season, but is he worth a first-round pick at this point of his NBA career? That’s up to the Lakers to decide. This is only the second time of his career he’s averaging at least 20 points per game. Hachimura is only 24, so that’s something else to keep in mind.

In October, Bogdanovic signed a two-year, $30.03 million contract extension with the Pistons. The forward’s currently in the final year of his four-year, $73.1 million deal he signed with the Utah Jazz in 2019.

To answer the question, since the Lakers have only their 2027 and 2029 first-round picks for the rest of the decade, the front office will not trade for Bogey. It’s too big of a risk. The team has little to no leverage to call any shots at the moment. Having said that, it would shock everyone if L.A. pursued a deal.