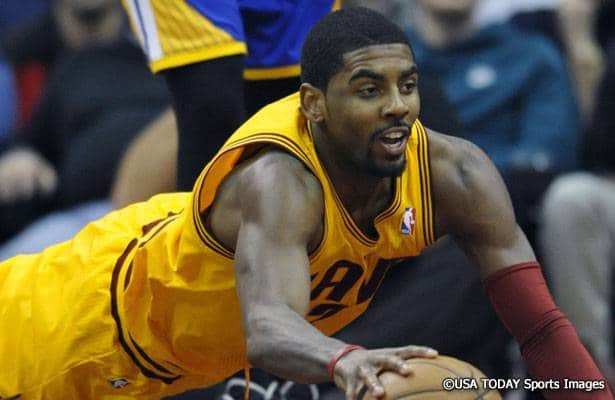 Chris Grant is out as general manager of the Cleveland Cavaliers, which shouldn’t come as too big a surprise considering the disappointing season that the team is having this year, but he’s left an interesting roster for whomever takes over the job in his absence.

Here’s a five-step checklist for the new GM of the Cavaliers to follow over the next several months as he tries to sort out the mess left for him by his predecessor:

#1 – Persuade Kyrie Irving not to leave.
Anybody who has watched the Cavaliers play over the course of the last several weeks knows that Kyrie Irving’s body language is bad, bad, bad, which is probably why media outlets have started talking about the possibility of him leaving Cleveland in free agency the first chance he gets. Irving is shrugging off these kinds of questions for now (albeit just a little too unconvincingly), but the job of the new GM first and foremost is to persuade this kid that things are going to turn around and that Cleveland is the place he’s going to want to be for the duration of his career. An impressive trade deadline move could go a long way toward proving that, but if that doesn’t happen, this coming offseason is a huge one for the Cavs.

#2 – Find a new head coach.
While there are plenty of people that believe Cleveland’s problems expand to pretty much every corner of the court, the reality is that the team’s offense is what has been bringing them down this year. With Irving playing uninspired basketball, Luol Deng has been left to chip in his typical 18 PPG while the rest of the squad languishes in offensive mediocrity. Mike Brown, a defense-first kind of coach that hasn’t even been able to get his team to play good defense, has to take a good chunk of the blame for that. Bring in George Karl (or some Vogel/Thibodeau brand of assistant ready for his first big opportunity) and watch this team morph into something playoff-worthy in no time.

#3 – Re-sign Luol Deng.
Well, sign LeBron James first and foremost, if you can, but if like most human beings LeBron would rather stay in South Beach where the state taxes don’t exist and the weather is always awesome and his boss gives him whatever wants, then Deng really is the team’s best bet in free agency this summer. We know that $10 million a year isn’t enough to keep him, but $12 million a season probably is, and for what Deng brings not only on both ends of the floor but also in terms of leadership, that could be worth it for a young Cavaliers team in desperate need of more veteran leaders in the locker room. Deng has to be a keeper if Cleveland wants a shot at the postseason. They’re not going to find a better small forward option in free agency.

#4 – Stop taking risks in the draft.
Perhaps Chris Grant’s biggest downfall was the way that he drafted. For three consecutive seasons, he used top-four draft picks in absolutely head-scratching ways, taking Tristan Thompson ahead of Jonas Valanciunas in 2011, for example, followed by the selection of Dion Waiters over Harrison Barnes and Andre Drummond the very next year. Most recently, Cleveland squandered their hard-earned No. 1 overall selection on Anthony Bennett when the rest of the world believed Victor Oladipo would’ve been a much safer bet. With a potentially high pick again this year, there can be no more risks. If Julius Randle is available, for example, you don’t pass on him for Aaron Gordon. This is not the year for that. Make smart draft picks. Please.

#5 – Bring in free agents and/or trade for players that make the offense more efficient.
As mentioned above, Cleveland’s biggest issue right now is offense, and while a new coach would certainly help in terms of system, a guy can only do so much with the personnel he’s been given. That said, any move made this summer needs to be done with offense in mind. The more points Kyrie Irving can score, and the more assists he can manage with more talented supporting teammates, the happier he’s going to be, and let us not forget what the Cavs’ No. 1 priority must be under the new GM.

As bad as Cleveland is right now, the new general manager will have a pretty desirable situation with which to work. There are young players that can be used as trading chips, talented veterans to build around, and even cap space and a potential lottery pick to tinker around with this offseason. All is not lost, but Grant sure had things heading that way. Now, a new chapter can begin that hopefully gets the Cavs back on the right track.