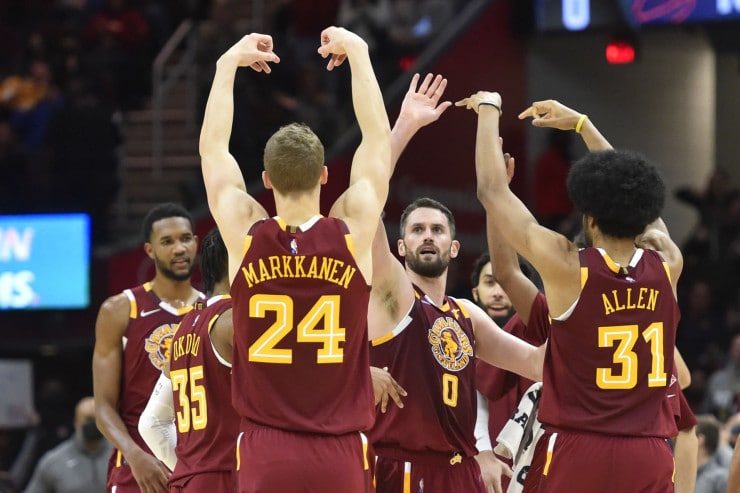 Most of the basketball world is keeping a close eye on the news wire as the NBA trade deadline is just over a week away. Once February 11 rolls around, the spotlight will be on All-Star weekend, which kicks off one week later in Cleveland, Ohio.

The weekend festivities will commence with the 71st All-Star game on Sunday. Last week the league announced the ten starters for the All-Star game this year. The reserves and replacement players will come this week, with all of the stars gathering in Cleveland that weekend. That is only fitting, as the city has plenty of star power on their own team.

There have been some amazing storylines playing out this season, such as the return of Klay Thompson, the rise of Ja Morant, the strong play of Joel Embiid, and the success stories in Chicago and Memphis. There is another team that has been turning heads this season, and their turnaround has been arguably the story of the season so far.

Cleveland finished last season with a 22-50 record. They were 13th in the East and had the worst offense in the league and the fifth-worst defense. It was a brutal year for the Cavaliers, who were in the beginning stages of another rebuild. Typically, the prognosis for a rebuild in the NBA is four or five years before the results begin to show. Someone apparently forgot to tell Cleveland that.

This season the team sits 3rd in the East and ranks 3rd in defensive rating. There are some new pieces on the roster but most of the key contributors are familiar faces. JB Bickerstaff is in his second full-time season as head coach, after taking over towards the end of the 2019-20 campaign. The 42-year old is one of the favorites for the Coach of the Year award this season, and deservedly so. There is so much more to this story though.

The success that Cleveland is having this season is not tied to just one or two players. Everyone on this team is playing a role, and playing it well. Everywhere you look on this roster, there is a story to tell.

Darius Garland is having a career year in his third season out of Vanderbilt. The Cavs selected the guard with the fifth pick in the 2019 draft, despite concerns that they had just drafted Collin Sexton the year prior. The organization believed that the two could co-exist, and they have done just that. Sexton suffered a season-ending injury just before Thanksgiving but the team has not missed a beat in his absence, thanks in large part to Garland’s strong play.

Over the last 9 games, @dariusgarland22 is averaging:

He also has 7 double-doubles over that span.

First, it was Ricky Rubio that stepped up and gave Cleveland the veteran presence at the point guard position, but he also suffered a season-ending injury just after Christmas. He had some monumental performances alongside Garland and was a great mentor to the young guard who just turned 22 years old last week.

Garland is posting career-highs across the board, including 8.2 assists per game which ranks 6th in the league. He is also shooting 91 percent from the free-throw line, which ranks near the top of the league. Even if the All-Star game wasn’t in Cleveland this year, Garland has proven himself worthy of a roster spot this season.

Another player that deserves to be an All-Star this year is Jarrett Allen. The big man has made a huge difference for this team since they acquired him last season from Brooklyn. He signed a big contract in the summer and has been worth every penny so far. Allen is posting career-highs in points, rebounds, assists, steals, and shooting efficiency (69 percent) and has started all 41 games for the Cavs this season.

So much of what Cleveland is able to do on the floor is because of Allen’s presence in the paint, his versatility on defense, and his ability to finish at the rim. He has also been a sensational fit alongside rookie Evan Mobley. Cleveland has embraced the twin tower philosophy and it has worked to perfection.

"He might be the most talented rookie I’ve every played with, being able to control so many things on the court, even without scoring the basketball.” #LetEmKnow #NBA #RookieOfTheYear

Mobley was the 3rd overall pick this year but widely considered to have the most upside of anyone in the draft. He has had an immediate impact on both ends of the floor and has given opposing coaches headaches all season long. The seven-footer has the handles of a wing player, the touch of a typical big man, but also the ability to play on the perimeter. On top of all of that, he is an elite shot-blocker and already has a high basketball IQ at the ripe age of 20 years old.

If starting two seven-foots were not enough, the Cavs have added a third player to the mix in Lauri Markkanen. After four up-and-down seasons in Chicago, Koby Altman was able to put a deal together for the 24-year old. Cleveland has used Markkanen at the small forward position, which gives them an advantage on offense and surprisingly has not hindered them on the defensive end of the floor. The team just needs him to play his role, which he has done when healthy.

With all of these young big men on the roster, the assumption was that Kevin Love would find his way out of town. The veteran forward struggled with injuries the last few seasons and had to remove himself from the Team USA roster in the summer when it was clear he didn’t have much to offer them. Just when it looked like the 33-year old was at the end of his career, he appears to have found a time machine.

Love has not just been productive for this team, he has been the catalyst they so desperately needed off the bench. He is a former champion with so many individual accolades and just didn’t fit in with this young core. Instead of taking the easy way out, he has embraced his sixth man role and provided the spark for this team when they need it most. He has turned back the clock and is teaching these young guys the right way to do things, leading by example.

Outside of these core guys, there are several role players that have been playing consistently well for Cleveland this season. Cedi Osman and Isaac Okoro have been solid in their limited roles. Dean Wade and Dylan Windler have stepped up when called upon. Lamar Stevens has been outstanding as an on-ball and versatile defender. His defensive awareness and hustle at both ends have made a significant impact on this team.

Everyone knows by now how good Garland, Mobley and Allen are for the Cavs. So I’m going to keep pointing out guys like Dean Wade and Lamar Stevens, two undrafted forgettables they have developed into valuable rotation pieces. That’s really, really hard to do.

Rookie of the Year. Most Improved. Coach of the Year. Sixth Man. Defensive Player of the Year. The Cavs have a candidate for each of these regular-season awards, in addition to the possibility of two All-Stars playing in their home city. That is a reflection of this team as a whole; many different parts working together as one.

There aren’t many teams in the league that can say they have legitimate contenders for five different awards this season. No matter how their postseason ends, the future is bright once again for the city of Cleveland.