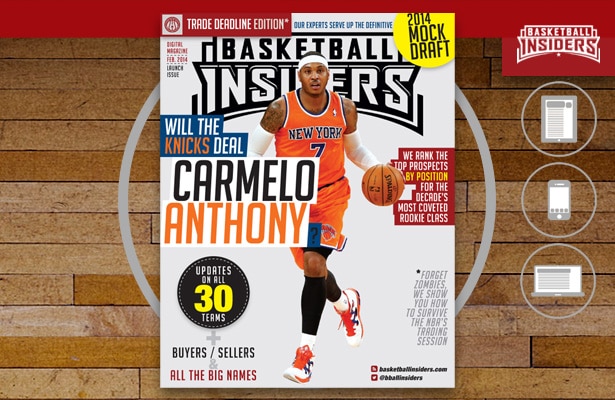 The 2014 NBA Trade Deadline is just one week away. Are you prepared?

The deadline has become one of the biggest days in the NBA season, and Basketball Insiders wants you to be as knowledgeable as anyone as Feb. 20 approaches. That’s why we wrote the 2014 NBA Trade Deadline Guide, which is the first issue of the new Basketball Insiders digital magazine.

The Trade Deadline Guide can be purchased on Turn-Page, which allows you to view the magazine on your desktop, tablet and smart phone. It can also be purchased through the app store for Apple devices and Android devices.

The magazine is 100 pages of brand new content that isn’t available anywhere else. Our writers worked overtime to make put this together and we’re really proud of how it turned out. Here are some of the things that you’ll find in the magazine:

– An in-depth breakdown of every NBA team that features their first-half recap, untouchable players, expendable players, draft assets and a prediction of what we think will happen at the deadline. The team breakdowns are two pages each and packed with information to prepare you for Feb. 20. 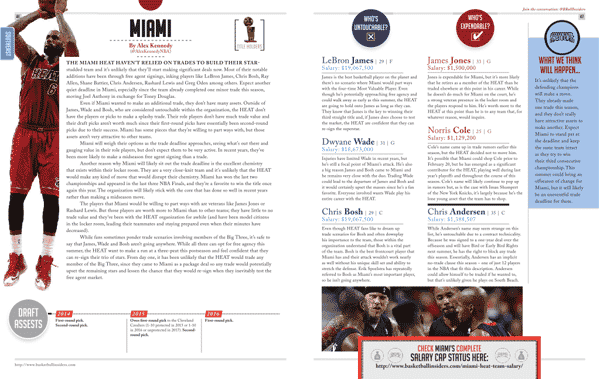 – A behind-the-scenes look at what it’s like to work in an NBA front office at the trade deadline. This was written by Travis Heath, who was a front office consultant for an NBA team for two and a half years and has some great stories to share. 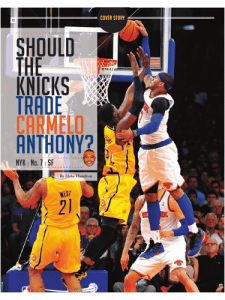 – A look at whether the New York Knicks should trade Carmelo Anthony. This is our cover story, written by Moke Hamilton. He spoke to Anthony’s teammates about the star’s importance to the Knicks (and got yelled at by Kenyon Martin, which is in the article) and he does an outstanding job explaining New York’s predicament.

– A look at what the trade deadline is like for all of the individuals who are involved in the discussions, by Alex Kennedy. A player (Chris Kaman), executive (David Morway) and agent (Roger Montgomery) talk candidly about what the days and hours leading up to the trade deadline are like for them.

– A list of the notable players who could be on the move before the deadline, by Eric Pincus. There are more than you think, and Eric explains why each player is included on the list and breaks down the likelihood of each player being moved. 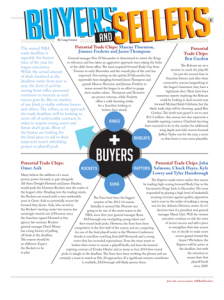 list of the buyers and sellers as the deadline approaches, by Lang Greene. Which teams are looking to make a move to bolster their roster for a playoff push? Which teams are focusing on the future and willing to part with some of their pieces? Lang touches on a number of teams that fit into each category and what moves they’re weighing as the deadline nears.

– Exclusive interviews with 10 players who have been dealt or heard their name in trade rumors at the deadline, by Jessica Camerato. These players open up about what it’s like being traded, how they deal with rumors, what they’ve learned from their experiences, how frustrating this time of year can be for players and much more. 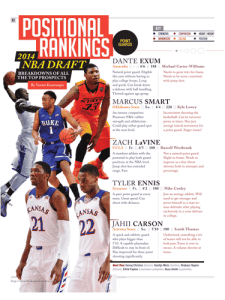 – 2014 NBA Draft positional rankings, by Yannis Koutroupis. This season, teams are hesitant to part with first-round picks because this year’s draft is loaded. Learn more about the top players at every position, including their strengths, weaknesses, NBA comparison and more.

– 2014 NBA Mock Draft, by Yannis Koutroupis, Steve Kyler, Joel Brigham and Alex Kennedy. It’s never too early to start looking at the draft, and our four draft analysts give you their thoughts on the first round with each of their mocks. Is Kansas big man Joel Embiid the top name across the board, or is there a dark horse in the mix? Every pick from four different view points. This is being projected as one of the best draft classes in recent memory, since there are several players at the top of the board who have the potential to change a franchise.

This is content that cannot be found on the website, or anywhere else for that matter. Our team put in a ton of work to put this magazine together and we hope you enjoy it as much as we enjoyed producing it!

Get your copy today!