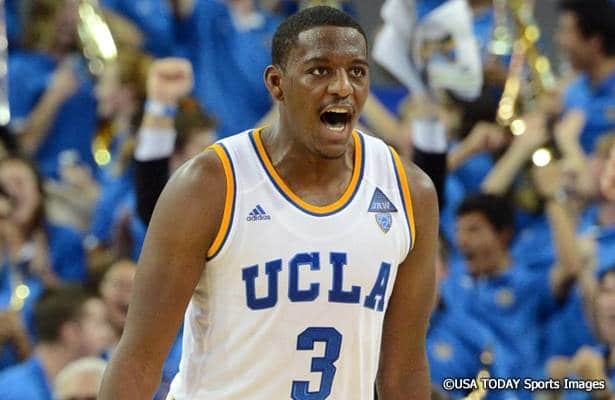 As the 19-year-old saw his potential game-winning three develop in the Pac-12 title game against the Arizona Wildcats, he knew that he would hit the clutch shot and send UCLA into the 2014 NCAA Tournament with some momentum.

“As soon as Coach drew up the play and then Kyle threw me the ball, I knew I was going to make it,” Adams told Basketball Insiders. “I just knew it. The play was set up for me to shoot the three, and we practice that play all the time. As soon as I got it, I knew that I would cash it.”

If you can’t tell, Adams doesn’t lack confidence. And neither do the Bruins entering the Big Dance.

UCLA, earning the 4-seed in the South Region of the bracket, will take on 13-seed Tulsa on Friday evening. The team believes that they have what it takes to make a deep run. Many experts agree, labeling the team as a dark horse contender.

“I think we could go far, I think we could win it all,” Adams said. “With the way that we’ve been playing lately, we can play with any team in the country. Hopefully we just show up and play our best basketball in the tournament. I’m very excited to play in my first NCAA Tournament. Last year, I broke my foot so I wasn’t able to travel. I can’t wait to step on that court and actually play.”

This season, Adams has led UCLA in scoring with 17.2 points, while also contributing 5.3 rebounds, 2.3 assists and 2.7 steals. He’s shooting 47.7 percent from the field, 36.1 percent from three-point range and 83.7 percent from the free-throw line. Adams has had 12 games with 20 or more points and his performance in the tournament will be key in determining just how far UCLA can advance.

“I think my biggest strength is my scoring ability and the variety of ways that I can score, whether it’s down low, coming off of screens, off the dribble or catch-and-shoot,” Jordan said. “I loved watching Allan Houston and Tracy McGrady when I was growing up. Tracy McGrady was always my favorite player. Now, I like to watch James Harden, Manu Ginobili and Nick Young, guys like that who can score the ball and are about the same height as me.”

Adams and Kyle Anderson give the Bruins one of the more talented backcourts in the nation. This season, Anderson has averaged 14.9 points, 8.8 rebounds, 6.6 assists and 1.8 steals – doing a little bit of everything for UCLA. This duo is a big reason why the Bruins will be a tough out in the tourney.

“It’s funny because we’re two of the biggest guards in the country,” Adams said. “We have a huge backcourt since he’s 6’9 and I’m 6’5, so that causes a lot of match-up problems for teams from the get go. He’s a great facilitator and he leads our team. He definitely makes my job a lot easier.”

UCLA is ready for their game against Tulsa, a team that won eight games to close out regular season play and then three more in the Conference USA tournament.

“They’re a pretty good team,” Adams said. “They won 11 in a row and they have a great coach in Danny Manning, who was at Kansas before. They won their conference as well, so I think it’ll be a good game.”

Adams feels like he and the Bruins have flown under the radar throughout this season.

“I feel like it’s been like that my whole life, I’ve always felt overlooked,” Adams said. “It’s fine though; it’ll play itself out and we’ll see what happens.”

Adams is obviously focused on UCLA’s tournament run right now. But once March Madness is over, he may be shifting his attention to the 2014 NBA Draft. Adams can leave school this summer, forgoing his final two years of eligibility to chase his NBA dream.

“I’m just trying to stay focused on my season and see how far we can go,” Adams said. “[Getting drafted eventually] would be very exciting. That’s every kid’s dream, to get drafted and hear their name called. It would be a dream come true and my family and I would be very happy.”