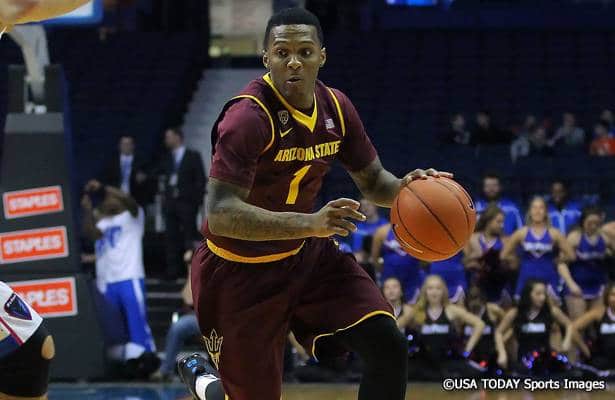 TEMPE, Ariz. — Arizona State guard Jermaine Marshall had gone scoreless for about 20 minutes, but he came to the rescue to deliver the biggest home victory ever for the Sun Devils.

Marshall hit two 3-pointers and drove to the hoop for the go-ahead basket with 14.7 seconds left in the second overtime as Arizona State upset second-ranked Arizona 69-66 on Friday night at Wells Fargo Arena.

Arizona is the highest-ranked opponent that ASU has ever beaten at home.

Marshall, a graduate transfer from Penn State, finished with a game-high 29 points.

“Jermaine is just incredible,” Arizona State coach Herb Sendek said. “It just seems like the bigger the moment, regardless of what’s happened previously, he has an amazing capacity to make a big play, to be at his best when the game is on the line.”

Arizona State (19-6, 8-4 Pac-12) bolstered its NCAA Tournament resume with its sixth victory in the past seven games. Arizona (23-2, 10-2) was undone by poor free-throw shooting (15 of 26, 57.7 percent) and a failure to convert the final shot at the end of regulation and the first overtime.

“We played a phenomenal team. There’s a reason they are No. 2 in the country,” said ASU center Jordan Bachynski, who had 13 points, seven rebounds and eight blocked shots.

“No words can explain the joy that we feel right now. I mean, that is huge for us, for our resume, for our goals of the postseason tournament.”

After Marshall’s drive gave the Sun Devils a 67-66 lead, Arizona point guard T.J. McConnell drove the lane and attempted a scoop shot that was swatted by Bachynski, the NCAA leader in blocked shots.

The ball caromed upcourt to Arizona State point guard Jahii Carson, who dunked in the final second, causing the student section to rush the court.

Officials ruled there was 0.7 of a second remaining, however, giving Arizona a final shot. Guard Nick Johnson got off an attempt from about 35 feet that hit the front of the rim. The crowd resumed its court-storming.

“Our offense is continuing to put more pressure on our defense,” said Arizona coach Sean Miller, whose team shot 35.9 percent from the field (23 of 64).

Carson scored 17 points for Arizona State, almost all coming while Marshall was being shut down by forward Rondae Hollis-Jefferson late in the game.

Arizona had a chance to win at the end of the first overtime, but Johnson missed a step-back 18-footer, with the ball going out of bounds to Arizona State with 1.8 seconds left. Carson got off a half-court short at the buzzer, but it was not close.

Arizona State led 51-46 with 2:38 to go in regulation, but Gordon completed a three-point play to bring the Wildcats within two. After each team missed shots, a steal by Hollis-Jefferson led to a tying layup by McConnell with 47 seconds to go.

Arizona State squandered its chance for the lead when too much dribbling from Carson led to a shot-clock violation. Arizona had about 11 seconds left for the final shot, but Gordon drew air after a spin move in the lane.

Marshall, the team’s second-leading scorer (15.6 points per game) who missed the season’s first game against Arizona because of a groin injury, kept the Sun Devils close in the first half with 12 points. And then he came up big with the game on the line, including the driving layup against Johnson, a defensive ace.

“The play was set up for a three,” Marshall said. “He was playing me pretty close, playing me well. I read him up tight and was able to go by him.”

Defenses dominated the game early. By the second media timeout, the teams had combined to make 5 of 20 shots from the field and were 0 of 4 from the free