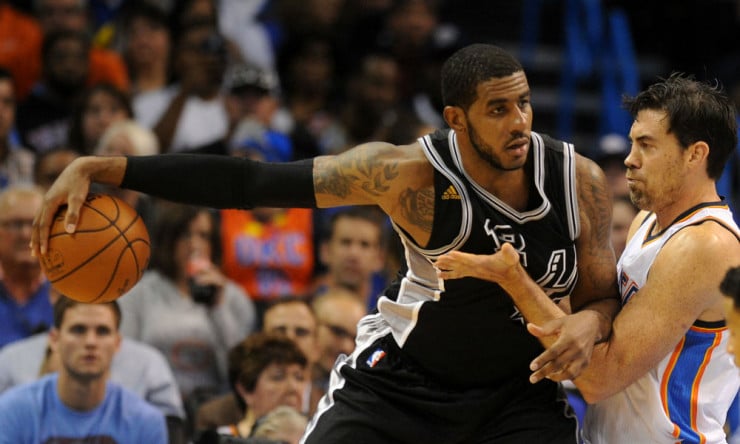 For as long as I can remember, the demise of the San Antonio Spurs has seemed imminent. To many, it was a surprise that Gregg Popovich was able to lead his team to the Western Conference crown back in 2013 and an even bigger surprise that his team was able to defeat the Miami HEAT in the NBA Finals the following year.

After losing to the Los Angeles Clippers in the first round of the 2015 playoffs, many people thought that the franchise’s run of dominance was finally over and that Tim Duncan’s time as a contender had come and gone.

Now, with LaMarcus Aldridge and David West added to the fold and Kawhi Leonard re-signed, the Spurs, surprisingly, are being touted by Bovada as the favorites to win the NBA’s Western Conference this year.

Is Rudy Gobert Poised for Stardom?

One of the biggest surprises of the 2014-15 NBA season was the emergence of Utah Jazz center Rudy Gobert. The big man was the 27th overall pick (and the ninth center selected) in the 2013 NBA Draft, and he averaged just 2.3 points, 3.4 rebounds and .9 blocks in 9.6 minutes as a rookie. But once Gobert received more playing time in his second season, he became one of the most productive centers in the league. In his 37 games as a starter last year, he averaged 10.8 points, 12.5 rebounds, 2.8 blocks and one steal while shooting 59.4 percent from the field.

His advanced stats are even more impressive and show just how much of an impact he had on the defensive end. Gobert held his opposition to 40.6 percent shooting at the rim and 55.5 percent shooting from the field – both of which ranked first in the NBA. He also led the league in block percentage (swatting seven percent of all attempts when he was on the court), adjusted points saved per game (nine) and points saved over his position’s average (and it wasn’t close, as he saved 256.2 points last year while no other player saved more than 189). Another number that displayed Gobert’s dominance was Utah’s defensive rating when the big man was on the court (98.8, which would rank second in the league) versus when he was off the floor (106, which would rank 27th in the league).

Is This The Last Run For The Grizzlies?

When Robert Pera bought the Memphis Grizzlies, a dinner was organized to let Pera get to know the key parts of the team he just bought. When guard Mike Conley arrived for the dinner, he experienced an awkward moment. It wasn’t a team dinner; outside of Pera, the only others in attendance were teammate Marc Gasol and some senior Grizzlies staffers.

Today, that first meeting is telling. The Grizzlies are not getting any younger, and while Memphis has been as competitive as anyone in the West over the last few seasons, the clock is ticking on the Grizzlies as currently constructed.

Gasol signed a long-term deal to stay with Memphis this past summer, while Conley is due for his big, almost-unquestioned pay day this July. Beyond those two, just Zach Randolph has a meaningful contract beyond this year and it’s likely that if the Grizzlies can’t get to the promised land this season, a very different looking Grizzlies team is likely to be constructed going forward.

The 2015-16 NBA season is set to tip off in just a couple of hours, and it’s safe to say that the weeks leading up to this point have been a grind for many players. The preseason is a time for many players to make a name for themselves in an attempt to secure an opening night roster spot on a team.

Teams were required to submit their final rosters yesterday, which put each team at no more than 15 players. Some teams opted to carry just 14 players into the regular season (to leave an open roster spot), while others decided to keep the maximum 15 players. Just two weeks ago, there were still at least 120 players who had to be cut by the end of the month.

With the plethora of moves that have been made over the past several days, a lot of quality players were sent packing from their respective teams and are now free agents. Those teams that kept an open roster spot could have been planning to have flexibility in order to sign a player who was cut this week and could look to make a move accordingly.

2012 Extensions Not Showing Much Movement

Thomas Robinson and Austin Rivers have already had bouts with free agency and have bounced around the league. Dion Waiters was traded by Cleveland to Oklahoma City and is still finding his niche, so an early payday may be delayed. Terrence Ross has been streaky throughout his career and the Toronto Raptors opted to invest $60 million in DeMarre Carroll this past summer at his position.

The remaining three players selected in the top 10 back in 2012 are players brimming with potential. However, with less than a week before the deadline two of the three have closed up shop on negotiations and are headed to (restricted) free agency next July.

Here is where we stand currently with notable names from the class:

Clearing Out the Logjams Around the NBA

Depth is a good thing in the NBA. However, a logjam at one position is not. A deep bench helps you win brutal games in mid-February when everyone is tired, whereas having a logjam can haunt your season.

In a logjam, where a team has several players of similar skill level at the same position, ego issues can crop up. Every player wants to prove himself, earn a starting position and play more minutes — and that’s not wrong. They need to show teams that they deserve their next big contract. But it’s difficult when two players are showing the coaching staff near equal talent, effort and production.

There are two ways to fix a logjam. Either trade away one of the pieces for a player at a different position, or wait for one of the players to make themselves the clear-cut starter. Here’s a look at some logjams across the league with some thoughts on how they will unfold going forward.

It was just another game on Wednesday.

Jahlil Okafor woke up to read his text messages from his family, ran through his usual routine on the court, watched television programs on his laptop and took a nap. Later that evening, he hit the floor for 38 minutes, scored 26 points – a mix of jumpers in the paint and buckets at the basket – and grabbed seven rebounds.

It was just another game on Wednesday. At least that’s how Okafor made his NBA debut appear.

The third overall pick in this year’s NBA Draft attacked his first game as if he had done this before. After the reality of his new career sunk in during the singing of the National Anthem, he quickly shook any anxiety and settled into a groove.

NBA basketball is back! Let’s all let that sink in for just a moment.

That was refreshing. While they might technically be a couple days late (the raw picks themselves can be found on Twitter for any doubting their legitimacy), here are one writer’s predictions for who will take home the hardware for the league’s biggest awards at the end of the year.

While we’re only three nights into the NBA season, there have already been a number of both pleasant and unpleasant surprises that have turned a lot of people’s expectations onto their heads. While the preseason appeared to show some trends that looked promising (or not) for the upcoming regular season games, nothing is set in stone until things count for real.

Things count for real now, and already with just one or two games under every team’s belt there have been a number of surprises in the young season’s first three days:

All NBA fans are well aware at this point that depth has been an issue for the Los Angeles Clippers for the last few seasons. This issue culminated last season with a historically bad collapse in the second-round of the playoffs. The Clippers managed to out-duel the San Antonio Spurs in an epic first-round matchup, but had little left in the tank against the Houston Rockets. The Clippers started off well in the second-round, but couldn’t find the energy or discipline to close out Houston. In doing so, the Clippers became just the ninth team in league history to lose a playoff series after going up 3-1 in a best-of-seven series.

Clippers’ team president and head coach Doc Rivers managed to address his team’s depth issue this offseason by trading for Lance Stephenson, re-signing DeAndre Jordan and Austin Rivers and signing free agents Paul Pierce, Josh Smith, Wesley Johnson and Pablo Prigioni. With these new additions, many fans and analysts have pegged the Clippers as a title contender, though there are still many people who question whether this team can make it out of the Western Conference.