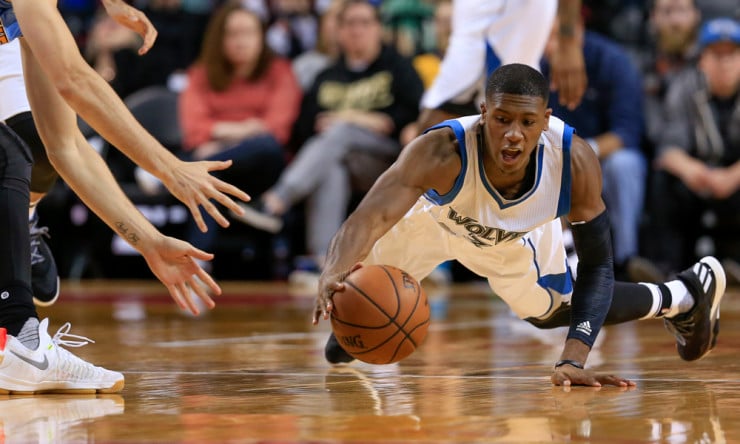 Forget about Michael Jordan, LeBron James may actually have his eyes set on Kareem Abdul-Jabbar.

And no, it’s not because the legendary center stands at 7’2, it’s because James has a legitimate shot at surpassing him as the greatest scorer in NBA history.

In fact, if things continue along the way they have been, it may end up being a walk in the park for King James.

Will Kris Dunn follow in the footsteps of Stephon Marbury and Sam Cassel, becoming the Minnesota Timberwolves’ point guard of the future? Or will he struggle and bare a closer resemblance to Troy Hudson and Jonny Flynn?

Seven years after drafting Ricky Rubio and Flynn with the fifth and sixth overall picks in the draft, the Timberwolves hope they’ve found the point guard of the future in Dunn.

How Jason Smith Rose to The First Round

A lot of the most talented American players in today’s NBA get discovered at very young ages, usually as part of an AAU team that travels and plays in front of prestigious colleges coaches long before they’re anywhere near adulthood. As a result, most of today’s American stars all know each other long before they get to college, let alone the pros. It’s a well-oiled machine that paves the way for a lot of young professionals, but it’s not the path every player takes to the NBA.

Washington Wizards big man Jason Smith, for example, was just like any other high school kid in Colorado for his first couple of years at Platte Valley High School. And he didn’t get his first sniff at the possibility of a future in the NBA until the end of his freshman year at Colorado State University a few years later.

The Clippers Are Dominating in Unfamiliar Ways

The story for the Los Angeles Clippers has, for the most part, been the same ever since they traded for Chris Paul in 2011. They are annually one of the best teams in the NBA, powered by their top-three players (Paul, Blake Griffin and DeAndre Jordan), a high-octane offense, a league-average or slightly better defense and generally a shallow bench. However, things seem to be a little different this season, as the Clippers have the best record in the league (8-1) and are off to their best start to a season in franchise history.

The first response any NBA fan may have to the Clippers’ hot start is skepticism. The Clippers have been a good-to-great regular season team for years now, but have failed to make it out of the second round of the playoffs. However, this Clippers’ team seems a bit different than its predecessors. Sure, the majority of the players are the same, the coaching staff is only slightly altered and the starters continue to navigate their sets with peak efficiency. But this team isn’t just outscoring their opponents this season – they are pummeling them with a combination of energetic, lockdown defense, depth off the bench and their potent offensive attack.

Dante Exum Getting His Confidence Back

Suffering a serious injury can be one of the hardest things for a basketball player to experience. These setbacks are always frustrating, and recovery time can vary from player to player.

While the negatives of injuries are obvious, there can be some good that comes from going through this process. Of course, players may not admit that during their road to recovery, but there is an opportunity to take some positives from their time on the sideline when they return to the court.

For Utah Jazz point guard Dante Exum, his road back from an ACL tear a year ago has allowed him to see some of those positives that come with riding the pine. Exum missed all of last season while rehabbing from a torn left ACL and spent a lot of time watching from the sidelines.

The NBA Rumors Have Gotten Silly

The NBA rumor season usually does not get going until mid-December, when the bulk of free agents signed during the summer become trade-eligible. This year’s trade market expects to be a little more notable, mainly because there are a few teams with pending free agents or guys who have made it clear to their current team that they won’t be there much longer.

Recently, a couple of names have surfaced from other media outlets, which started the trade rumor bonfire a little earlier than expected. Let’s look at each of the names hitting the rumor mill and what we really know.

DeMar DeRozan, James Harden and Isaiah Thomas are playing at an extremely high level to start the season. DeRozan is leading the league in scoring at 34.1 points per game, while Harden is close behind him in scoring while also leading the NBA in assists with 13 per game. Thomas continues his stellar individual play in Boston, picking up where he left off last season.

When you take a deeper look into the statistics, it is evident that pick-and-roll action comprises a substantial portion of their overall offensive play types. Making the right decision whether to pass, shoot or re-angle a ball screen in order to attack the defense out of PNR is how many of these players, and others listed below, are able to gain their offensive advantage and make their mark on the game. Their effectiveness in PNRs is also a big reason why these players are doing so well.

Let’s take a look at five of the most efficient pick-and-roll guards (who have had at least 35 PNR possessions this season) and how they create opportunities for their teams off of this action.

Atkinson Draws From Past to Energize Nets

When Kenny Atkinson finished up his professional playing career, it was quickly apparent he’d remain in the game on the management side. He served as Director of Player Development for the Houston Rockets during the 2007-08 season, reporting to some young hotshot general manager named Daryl Morey fresh into his first season at the helm. Atkinson moved to the coaching side the following year as an assistant with the New York Knicks. He was once again under a first-year boss – this time Mike D’Antoni, who came aboard in New York the same year. After four seasons in the Big Apple, Atkinson joined the Atlanta Hawks’ coaching staff, and within a couple years he’d become acquainted with Mike Budenholzer.

As Atkinson crosses the 10-game threshold in his first gig as an NBA head coach with the Brooklyn Nets, it’s clear he hasn’t forgotten his past. In fact, he’s using it as a template.

Strange as it may sound, especially after coming one win shy of reaching the Eastern Conference Finals last season, there was a feeling that things would take a turn for the worse in Miami.

Free agency started on the right foot for the franchise, as the team re-signed center Hassan Whiteside to a four-year deal worth nearly $100 million. But soon, the defections began pouring in.

Veterans Luol Deng and Joe Johnson decided to take their talents to the Los Angeles Lakers and Utah Jazz, respectively. And then the big shocker: Dwyane Wade opted to sign with the Chicago Bulls. Next, any hope of a return to the court – at least in a Miami Heat uniform – for All-Star forward Chris Bosh was squashed by team president Pat Riley, who made it perfectly clear that the franchise was moving on from the sidelined star.

While it’s still very early in the 2016-17 NBA season, we’re starting to get an idea of which players belong in the initial MVP discussion. Some are the superstars who are always mentioned in these conversations, while others are a bit more surprising.

Each week, Basketball Insiders is going to look at the MVP race’s top 10 candidates. Check back each Thursday to see how your favorite player stacks up against competitors across the league. Here are our first MVP rankings of the season: