Connect with us
Home » news » Basketball Insiders Week In Review 320 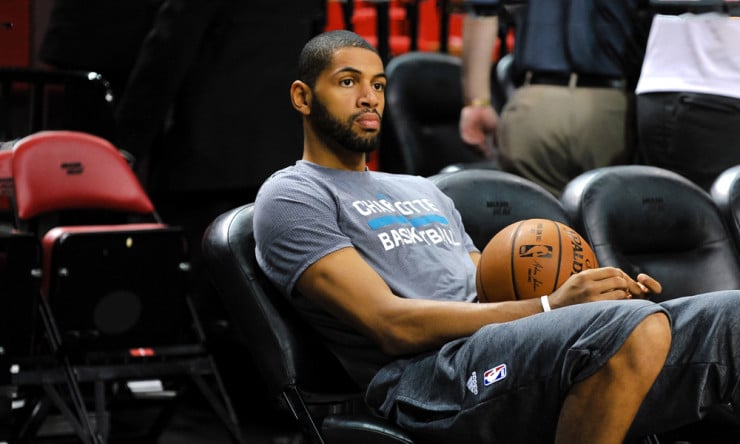 Pay Attention to the Hornets

At some point, you’ve just got to sit back in awe and wonder when a player is going to get his due. Yes, the Golden State Warriors and their pursuit of the single-season record for most wins is a major story, as are the San Antonio Spurs and their overall dominance of the league. And where Kevin Durant will be continuing his career next season is also a major question worth our attention.

But, at some point, one has to stop and look a little closer and give credit where credit is due, and in this instance, we do just that.

Very quietly, the Charlotte Hornets have gone 15-3 over their past 18 games and have solidified themselves as a quality team in the Eastern Conference while Kemba Walker has quietly proven to everyone in the world that he belongs.

Is It Time To Trade DeMarcus Cousins?

Psst, if you haven’t heard yet, Kings big man DeMarcus Cousins and head coach George Karl don’t really see to eye to eye. As stunning as that may sound, there is a real problem in Sacramento and unfortunately it may not go away quickly.

Kings majority owner Vivek Ranadive is in a tough spot. While he has been fun as a character in the NBA circus, he has been dreadful as an active owner. He has meddled in virtually every aspect of the team since being named majority owner in 2013. He has fired numerous coaches and a couple of executives, botched more than a few draft picks – insisting that his team spend those picks on players he felt were the right guys.

Over the years, he has alienated and marginalized his minority partners and cost them millions in eaten or bad contracts. With the pending opening of the new downtown arena in Sacramento, there is an impasse inside the ownership group that may block the Kings majority owner from more change this offseason and he has only himself to blame.

Whenever an NBA player is traded midseason, there is typically a difficult adjustment period. Some players get acclimated better than others, but there’s no question that it’s a hectic time for the individual. The player must uproot their life in an instant and then figure how to succeed in a different system with new teammates and coaches. It’s often a culture shock – on and off the court.

And Tobias Harris’ adjustment from the Orlando Magic to the Detroit Pistons is arguably even tougher than most. That’s because Detroit acquired the 23-year-old forward with the hope that he would be a big-time contributor and one of the Pistons’ leading offensive weapons going forward.

Never Spo Down: On Miami’s Success Without Chris Bosh

It takes gumption to be a successful NBA head coach, and Erik Spoelstra wouldn’t be here without it. At 41 years old and nearly two seasons into a Big Three era that would terrify many grizzled sideline veterans, Spo staked his career and legacy on a new iteration of modern basketball, downsizing his HEAT team in the wake of a Chris Bosh injury and keeping them that way even once Bosh returned. The move in part fueled two straight title runs, along with a league-wide spacing revolution.

With these dilemmas more commonplace a few years later, it’s easy to forget just how huge of a risk this was at the time. Spoelstra was willingly giving up an edge in an area most basketball people were conditioned to associate with success (size down low), banking on the trade-off elsewhere being worth eschewing the traditional approach. That he did it all with the weight of perhaps the most intense scrutiny a team (and star player) had ever faced to that point in history on his back is all the more impressive.

When it comes to postseason awards, all most people really care about is the race for Most Valuable Player. However, this year it really doesn’t look like much of a race at all considering how many games Golden State has won behind Stephen Curry’s insanely efficient and entertaining play.

There are, of course, other postseason awards that matter, including the Sixth Man of the Year Award, which has been doled out every season since 1982-83 to the players who have offered up the strongest performances as reserves for their respective teams. It’s a severely under-appreciated award because every true fan of the game knows how integral a strong bench is to winning games, particularly in the postseason. To have the best reserve in the league is a massive advantage over other teams in the NBA because it essentially allows for starter-quality production to continue even when the starters are getting a breather on the bench.

As initially reported by Adrian Wojnarowski of The Vertical, the NBA and the NBA Players Association agreed to reduce the league’s moratorium to the first six days of July.

The change may have been inspired by DeAndre Jordan’s free-agent flip-flop, that saw the center renege on a verbal deal with the Dallas Mavericks, only to rejoin the Clippers in a stunning reversal — but it’s the summer’s crop of restricted free agents that may benefit most from the rule change.

The league’s year comes to a close at the end of June, suspending activity through the annual moratorium, while accountants run through the previous season’s numbers to set the salary cap for the upcoming campaign.

Headed down the stretch, in any given NBA season, there are multiple story lines that begin to emerge. Some players raise their game to the next level, rounding into form as they make a playoff push (we identified a few of these guys in this space last week). Other guys unexpectedly hit a snag and struggle to maintain their earlier form as the season winds down.

This is season is no exception as there are more than a few guys that have seen parts of their game decline over the past month.

Let’s take a look at some today:

What to Make of Ricky Rubio?

Almost seven years since being picked fifth overall in the 2009 NBA Draft, there is still no consensus opinion on Ricky Rubio, the gifted point guard from Spain.

Part of the reason the verdict is still out on Rubio is time lost to injuries. On March 9, 2012, in a game against the Los Angeles Lakers, Rubio tore his ACL and lateral collateral ligament. Then, less than two weeks after signing a four-year, $56 million contract extension with the Timberwolves in October of 2014, it was announced that Rubio would be out indefinitely after he severely sprained his ankle. He would return to the court roughly three months later, but ended up undergoing surgery on that same ankle in April of 2015.

Another issue for Rubio is his inconsistent shooting. For his career, Rubio is shooting 36.8 percent from the field and 31.7 percent from distance. In a league saturated with point guards that can run an offense, score in bunches and knock down three-pointers, Rubio’s shooting is problematic. However, Rubio’s shooting shouldn’t overshadow the other things he does extremely well, which arguably negate his inconsistent jumper.