Connect with us
Home » news » Basketball Insiders Week In Review 330 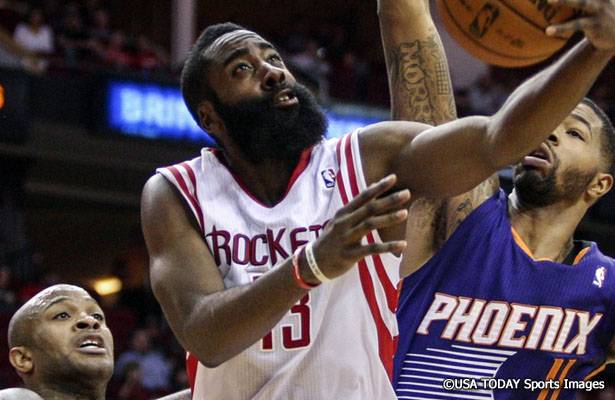 The NBA’s Most Valuable Player trophy is almost always a topic of protracted discussion among sports fans. Sometimes there is one player who is so dominant that there is little room for discussion, but over the last couple of seasons it has really come down to just two names: Oklahoma City Thunder forward Kevin Durant and Miami HEAT forward LeBron James. There is another player, however, who is making an awfully strong case that he should be in that conversation.

Last season, the Houston Rockets made their triumphant return to postseason play, winning 11 more games than they had the previous season due largely to the contributions of trade acquisition James Harden. Harden took the NBA by storm last season, proving himself to be the best shooting guard in the game, but he was not mentioned in the MVP discussion because Durant’s Thunder and James’ HEAT were among the best teams in the NBA. Of course, both Durant and James had All-Star teammates to aid their cause, which was not true of Harden.

Playing deep into the NCAA tournament never hurts a prospect’s NBA draft stock, especially if there are looming doubts and questions about that player’s game. For the top of the draft board, however, getting bounced early may be something of a blessing in disguise. While the NBA has set April 27 as the deadline for underclassmen to declare their eligibility for the 2014 NBA Draft, having an early exit also allows for some early decisions.

Last year, a number of the top draft prospects waited until the very last minute to select agents and to get into training programs. A number of them took hits to their draft stock because they were not in premiere shape when the draft combine rolled around and were not necessarily ready for the scrutiny that a tight draft race includes.

With most of the top names projected to be in the 2014 NBA Draft class already out of the tournament, they can now shift to decision time. Here is what we know today:

How to Fix the Detroit Pistons

The easiest way for the Detroit Pistons to fix the mess they’ve made for themselves would be to somehow get a hold of a Delorean with a flux capacitor installed, then drive it 88 MPH until it flashed into early July of 2013 so someone could keep them from paying out $54 million to Josh Smith.

Doing so would solve the team’s biggest problem, which is figuring out what to do with Greg Monroe, a restricted free agent this summer. Had the team never signed Smith, they could have awarded Monroe with an extension months ago and moved forward with a plan to build the team around him and burgeoning perennial All-Star Andre Drummond, but that might not be an option anymore.

After 21 weeks and with April around the corner, we are now officially at that point of the NBA season where every single game could make a monumental difference.

Despite winning eight games in a row, with Sunday night’s home loss to the Cleveland Cavaliers, the New York Knicks have seen their playoff hopes take a tremendous blow.

With the recent struggles of both the Miami HEAT and Indiana Pacers, the HEAT have been unable to close the gap on Paul George’s team, but the two teams are set to meet on Wednesday night in the first of their final two battles of the regular season (the second is in a few weeks). Still, it looks quite simple: if they split those games, the Pacers will earn home court advantage, but if the HEAT sweep those two, it is them who will enter the playoffs as the number one seed.

Out West, a late surge by the Phoenix Suns has seen them close the gap on the Dallas Mavericks and Memphis Grizzlies for one of the two final playoff spots out West, and with the teams still having games coming up against one another, it is impossible to know which of those three teams will be sitting at home once the postseason begins. But one of them will.

The San Antonio Spurs have entered every season for the last five years with questions on how long the franchise can remain among the league’s elite. On paper, the question is a legitimate one. Future Hall of Famer Tim Duncan (37) continues to age, former Sixth Man of the Year Manu Ginobili (36) is nowhere near the caliber of player he was during his prime years and the team routinely adds new role players,  expected to play pivotal roles, to the roster each summer.

San Antonio was literally less than 30 seconds away from adding another Larry O’Brien trophy to their mantle last season before succumbing to the Miami HEAT in the Finals. Despite the sour taste still lingering from last season’s finish, the Spurs (54-16) have successfully rebounded and are currently in possession of the league’s best record with roughly three weeks remaining in the regular season.

While there are rising concerns about whether Duncan will honor the last year of his current deal next season, the Spurs are once again firmly entrenched in the role of a contender heading down the stretch.

As the field of competitors for the 2014 National Championship has shrunk down to 16, the college basketball coaching carousel is moving at a dizzying pace. With over 300 Division I men’s basketball programs throughout the country, there’s always a ton of movement throughout the coaching ranks year in and year out.

Everyone longs to be in a position like Duke’s Mike Kryzyewski. Throughout his tenure he’s had numerous of other job offers, but he built the Blue Devils program into one of the premier positions in the country. No one, not even the Los Angeles Lakers, could make him a good enough offer to leave what he has.

Typically, though, when NBA teams come calling, they get their guy. We saw it last season with Butler and Brad Stevens. Stevens was working his way toward sainthood at Butler, but the Boston Celtics were able to pry him away to be their head coach.

We’re at the time of year where successful college coaches’ stocks are rising while struggling NBA head coaches’ seats are heating up. With that in mind, we take a look at the five college basketball coaches who appear to be gaining the most attention from the big league:

The Unintended Consequences of the 2011 CBA

The 2011 NBA lockout was universally hailed as an unmitigated win for the owners. They forced significant concessions from the players, reducing their percentage of Basketball Related Income from 57 percent to 50 while winning on so-called system issues as well. The players received almost no concessions in exchange. The system changes the owners fought so hard for were theoretically designed to level the competitive playing field between big and small markets while allowing teams to keep their superstars.

The only certain thing in such complex negotiations is that some unintended consequences will arise. Even the best of forecasters with carte blanche to design a system may struggle to anticipate the effects or regulation. When such regulations are the result of compromise or negotiation, they grow even more unpredictable. As a result, the 2011 CBA has resulted in some trends that may well have surprised its framers.

After an incredible start to the season that saw the Portland Trail Blazers exceed all expectations, the team has dropped nine of their last 13 games and slipped to the fifth seed in the Western Conference.

While other West contenders such as the San Antonio Spurs, Los Angeles Clippers and Houston Rockets have played some of their best basketball in recent weeks and seem poised to enter the postseason with momentum, Portland has struggled mightily. Making the playoffs seemed inevitable weeks ago, but now the Blazers are just two and a half games ahead of the ninth-seeded Phoenix Suns.

When asked to complete a preview and ultimate prediction article for the 2013-14 Sacramento Kings a win range somewhere in the area of 30-33 was settled upon if memory serves correctly. A five game improvement upon the 28-54 results from just a season before may sound like relatively modest expectations, but we also wanted to be fair to first-year head coach Mike Malone as he installed what they can only hope is a new sense of direction for the organization. However, he now has a year under his belt and expectations are only going to increase moving forward. Here’s our take on how they can meet, and potentially exceed them.

The Agony of an NBA Mistake

“If you’re not making mistakes, then you’re not doing anything. I’m positive that a doer makes mistakes.” – John Wooden

There is a certain exhilaration that goes with being right about a player you have scouted. I got that feeling when I wrote about Damian Lillard after I had scouted him in person a couple of times and said that he should be a top-two pick in the draft and would one day be an NBA All-Star. Longtime NBA folks I worked with scoffed at this notion and insisted that it was silly to make such an assessment given the level of his competition in the Big Sky Conference.

No Role Too Small for Murry Chasing a Dream

Scroll down the New York Knicks roster and Toure’ Murry’s name is toward the bottom of the stats. Minutes: 6.9, points: 2.4, games played: 45, starts: 0. He’s logged a total of 10 minutes this month on a team that is currently out of the playoff standings, yet the 24-year-old rookie has an overwhelmingly optimistic outlook on his first season in the league.

“Everybody’s dream is to get to the NBA,” Murry told Basketball Insiders. “It just makes me feel great to say I play in the NBA and (my family and peers are) basically living their dream through me.”

He plays for those who supported him along the way and continue to each game in the pros. He also takes the court for those who always believed he could make it, but never had the chance to see him realize his goals

The 2013-14 regular season is starting to wind down, with 18-19 teams still seriously in the playoff hunt.  Others are “fighting” for the best possible position in May’s NBA Draft Lottery.

Looking ahead to the 2014 offseason, a number of teams in the Southeast, Southwest and Atlantic divisions could have significant cap room this summer.

In the fourth part of this series, where do the five teams in the Pacific Division stand this offseason?