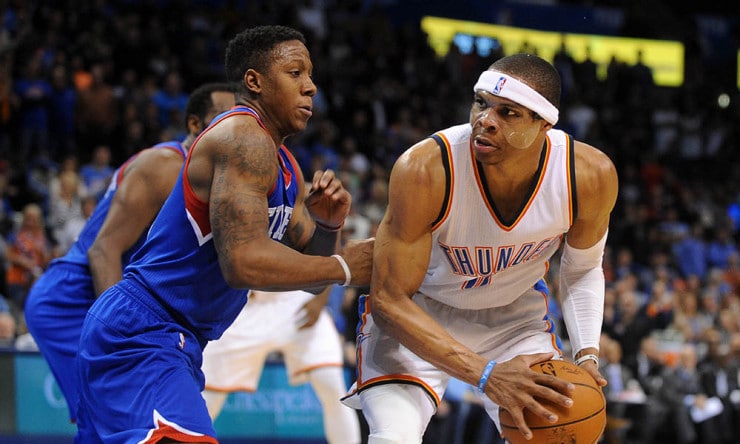 It’s been a number of years since we’ve seen an MVP race this tight, or one with as many reasonably viable candidates this late in the season. With just over 20 games to go, there are as many as five or six mostly realistic names still in the hat. Stephen Curry and James Harden have led the pack much of the year and continue to do so for many. LeBron James has been dominant in the months since his maintenance period, pushing the Cavs toward the elite status many had foreshadowed for them. Even Anthony Davis and his alien-like performances and numbers remain around the margins, though recent injuries, his team’s standing, and the incredible play of these other guys may see him trailing at this point.

Maybe the most interesting study, though, is Russell Westbrook (surprise, surprise). Both his own injuries and Kevin Durant’s have left a top-heavy Thunder team struggling just to reach the postseason, with much of this due to a 14-game stretch in November where OKC was without both superstars and went 4-10.

Back in July 2010, when Pat Riley walked into the room, he immediately and intentionally locked eyes with LeBron James.

He gave him a firm handshake, laid his rings out on the table and told James of his vision.

After four years and four consecutive Eastern Conference Championships, James opted to return to Cleveland, which left Riley and his front office in a precarious position.

Without James, deep down inside, Riley knew that his team would be done competing for championships over the course of the near future. Dwyane Wade and Chris Bosh both became free agents with James, and although it was a forgone conclusion that Wade would end his career in Miami, the prevailing sentiment as it related to Bosh was that he would bolt Miami if James opted to.

A Look Through The Eyes Of A Sports Bettor

The 2015 MIT Sloan Sports Analytics Conference wrapped up in Boston on Saturday and while the conference draws all manner of attendees, the bulk are people who work in or around sports who attend to network to expand their knowledge base.

However, there is another segment – sports bettors – that attends for entirely different reasons.

Data, analytics and trends within the numbers has become a booming industry for those that wager on the games and their outcomes. Analytics is becoming a huge part of that process for many of the high-volume bettors.

At 25-34 through three quarters of the season, most teams would have long since given up on any shot at the playoffs. And given the year that the Indiana Pacers have had, fighting off injuries to nearly every player of consequence on the roster, they’d be the furthest thing from what one would consider a postseason contender in any other season.

This, of course, isn’t any other season, particularly not in the Eastern Conference, where six below-.500 teams are within 3.5 games of the seventh seed. If the season ended immediately, the Pacers would be the eight-seed in the conference despite their dismal record. But unlike some of the other bummer East teams sneaking into the playoff picture, the Pacers are a squad that could actually do some damage when they got there.

For one, the core of this team has made two consecutive Conference Finals, an advantage that some Pacers players think will give them a boost in the race for a playoff spot.

Thomas Opens Up About Trade to Celtics

As soon as Isaiah Thomas found out he was traded from the Phoenix Suns to the Boston Celtics, he received a text from an NBA legend. The other Isiah Thomas had a message for him.

Thomas admittedly didn’t know where the Celtics were in the standings prior to the trade, but from that point on, he was extremely excited and determined to make his postseason debut with Boston.

What’s Left on the Schedule for Playoff Bubble Teams?

As we inch closer and closer to the end of the regular season, we’re starting to see teams separate themselves from the pack. For the most part, we can project what teams will be playoff bound and what teams will have some extra time off to scout lottery picks. However, there are still a number teams whose playoff hopes hang in the balance. Over the next month and a half, we will see which of these teams rise to the occasion and which teams fold under the pressure.

With that said, let’s take a look at the teams in each conference that are vying for a playoff berth down the stretch.

There was a period in Mo Williams’ NBA career when it felt like the winning would never end. The Cleveland Cavaliers were on top of the league. Deep playoff runs were expected his first two years on a team stacked with talent, led by LeBron James.

Williams was the starting point guard and emerged into an All-Star. He played in 25 postseason games in those two years. He became so accustomed to success during that brief stretch, he never stopped to let it soak in.

Nearly five years later, he draws a blank on his highest moment during that span.

Is Draymond Green Worth a Max Contract?

Over the last two seasons, Draymond Green has established himself as one of the best values in the NBA. Selected with the 35th pick in the 2012 NBA Draft, Green is currently a key piece for the Golden State Warriors, a team that is considered one of the favorites to win the championship this season.

However, Green is set to be a restricted free agent this upcoming offseason and he raised some eyebrows recently when he talked about the likelihood of this current Warriors team staying together past this season.

Finding former NBA players abroad – whether they’re just collecting checks, prolonging their career, reestablishing their name or expanding their on-court role – is nothing new. The NBA’s export market, after all, has not only helped connect international fans with the American product at large but has also produced mutually beneficial results. However, what has scarcely been seen before is former NBA lottery picks opting to take their services down to the Southern Hemisphere’s biggest island nation (as a means to help their basketball value). Jonny Flynn led the way when he first suited up for the Melbourne Tigers in Australia’s National Basketball League (NBL) and, more recently, Josh Childress decided it would also be advantageous too, signing for an undisclosed amount with the prestigious Sydney Kings.

Behind the Scenes Peek of Henry Walker

When Henry Walker – a wingman for the Miami Heat – began the season with the Development League’s Sioux Falls Skyforce, the NBA in all fairness, was nothing but a forgotten dream.

“Walker contemplated ditching his NBA goals. After all, he had failed in every attempt to make people understand him, and figured he would have a fresh start in Europe,” his agent Mike Naidtich told Basketball Insiders.

After dipping into the Philippines and life in Latin America, Walker was open to testing basketball in Europe. Over the summer, multiple teams showed initial interest, but faded into the background as a result of his $20,000 per month tag.

The chances of reaching the postseason once seemed like a long shot for the Charlotte Hornets when starting point guard Kemba Walker underwent knee surgery back on January 28.

The team realized that they would need to address that issue and add more depth in order to have any chance of sneaking into the playoffs in the Eastern Conference. Shortly after Walker’s surgery, the team opted to bring in veteran point guard Mo Williams to help lead the team in Walker’s absence and it appears that decision is paying off.

The Hornets acquired Williams and Troy Daniels from the Minnesota Timberwolves in exchange for Gary Neal and a future second-round draft pick. Although it’s a very small sample size (seven games), the 11-year veteran is playing some of the best basketball of his career with the Hornets, which couldn’t have come at a better time.

Non-Guaranteed Deals To Watch This Summer

The trade deadline has passed, franchises are gearing up for the playoffs, others are preparing for the upcoming draft and some organizations are making their 2015 free agent wish lists a bit early. Not only will the next few months crown a NBA champion, but the draft, free agency and more trades are in order as well.

Often lost in the free agency hype are the guys heading into next season with non-guaranteed deals. With securing salary cap space always a top priority for front offices around the league, these players could find themselves donning new uniforms as teams look to leverage their respective payrolls.

There are more than a few guys heading into the summer with non-guaranteed deals that are still highly productive. Some are unlikely to be impacted, while a few will be looking for employment elsewhere.

Should the Knicks make a Run at Draymond Green?

With the Knicks 2014-15 campaign mercifully winding down, Knicks fans are already looking forward to next season.

Thus, over the next few months, we’ll weigh the pros and cons of a number of potential free agent targets that Phil Jackson and the Knicks will likely consider this summer.

Despite an unfathomably awful season, there is actually reasons for optimism in New York. The Knicks will have a top lottery pick in June’s draft, possibly the number-one overall selection. They will also have a mountain of cap space to go shopping with in July.