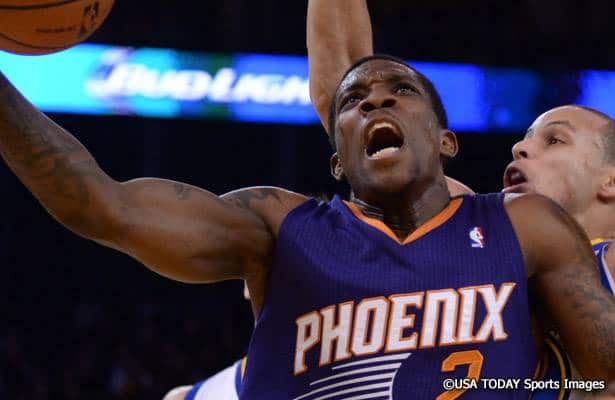 The Phoenix Suns were not supposed to be in the playoff discussion this season. Period. They were not supposed to be anywhere close to good enough to compete in the brutally tough Western Conference. Even when they were very good early on, the general feeling was that sooner or later they would come down to earth and be the rebuilding, mediocre team that most believed they would be. However, that wasn’t the case, and even though last night’s crushing, last-second loss in Dallas puts the Suns’ postseason bid in serious jeopardy, they have been an impressive team from start to finish this season.

Serge Ibaka To Win Defensive Player Of The Year?

Serge Ibaka, the Oklahoma City Thunder’s shot-blocking luminary, may collect the league’s prestigious Defensive Player of the Year award in the next few weeks. While critics and fans alike have taken note of Ibaka’s increasing offensive contributions this season, his already-impressive defensive prowess has markedly improved as well.

He tops the league in Defensive Impact (statistics measuring defense, considering blocks, steals and defending the basket); players defended by Ibaka are shooting just 44.2 percent at the rim this year. Plus, he leads the league in total blocks (209). Ibaka is averaging 15.2 points and 8.6 rebounds compared to 13.2 points and 7.7 rebounds last year. He’s logging increased numbers in assists, steals, field goals and even three-pointers. He ties teammate Kevin Durant in double-doubles (27) despite averaging about six minutes less in playing time.

Ibaka provided a remarkably straightforward and simple answer when asked to explain what in particular has led to his improved season.

Who Are The Next Wave Of GMs?

As the NBA season comes to a close on Wednesday a number of coaches and executives will likely be let go, especially personalities on teams that failed to meet expectations. Last season saw 13 coaching changes and eight front office hires. There won’t be nearly as many open front office jobs, but it looks like three or four opportunities could surface. Last week we took a look at some of those jobs and worked through a list of possible candidates.

Like most lists, the feedback from around the league offered up several more names to consider, so here is the second wave of ‘likely to get interviewed’ front office candidates.

The hair isn’t going anywhere. At least, that’s the plan.

Joakim Noah’s locks have been part of his M.O. for as long as he can remember. They became a conversation topic in the NBA on Draft Night 2007 when an image of his curls pouring out from underneath his Chicago Bulls hat stole the show.

The dominating big man has no intention of cutting his hair anytime soon.

With another NBA season drawing to a close, Basketball Insiders brings you its final Power Rankings heading into the postseason.

It has been a long and winding road for all 30 of the league’s franchises with some monumental disappointments—the New York Knicks, Cleveland Cavaliers and Minnesota Timberwolves lead the way here—as well as some astonishing surprises – the Phoenix Suns and Charlotte Bobcats, please take a bow.

But as the regular season is set to end on Wednesday night, there are still some matters to be determined. In the Eastern Conference, the Miami HEAT and Indiana Pacers are still vying for the top seed. The magic number for the Pacers is one entering Monday night, and we are inclined to believe that the HEAT would not necessarily mind ending up second. It would help them avoid the Brooklyn Nets in the second round—much to our chagrin.

Duke freshman forward Jabari Parker is expected to announce tomorrow whether he is going to enter the 2014 NBA Draft. He’s meeting with Duke head coach Mike Krzyzewski today to help finalize his decision. Typically there’s very little suspense for a prospect ranked as high as Parker, who is still in the mix to be the top overall selection. The smart financial choice is always to leave when your stock is that hot. However, from the day that Parker committed to Duke he always left open the possibility of staying for his sophomore season.

Coach K has clearly been operating under the assumption that Parker would be gone as he is fully equipped to field a contender next year with or without him. He currently has the top-ranked 2014 recruiting class, which consists of a dominant low-post presence in Jahlil Okafor, a true playmaker in Tyus Jones and incredibly skilled and athletic swingmen in Grayson Allen and Justice Winslow. Okafor happens to be a close friend of Parker; the appeal of playing with him and the rest of this incredibly talented class is among the reasons why he’s given staying as much thought as he has.

Following a 2012-13 season full of turmoil, in-fighting and injuries, the Los Angeles Lakers were more than due for a bit of a reprieve heading into this season. Needless to say, while most of the drama was kept to a minimum, a 55-loss season (worst in the history of the organization) isn’t going to leave anyone involved with the purple and gold feeling warm and fuzzy inside. In failing to qualify for the postseason, the 2013-14 roster becomes just the sixth team to do so in the franchise’s 66-year history. Even through what may seem to be the darkest of times for such a heralded franchise, that bit of perspective is necessary at this point.

Will The Clippers Finally Emerge?

Since All-Star point guard Chris Paul arrived in Los Angeles the Clippers have steadily moved up the Western Conference standings and are seemingly inching closer and closer into title contention. However, NBA history is littered with a plethora of teams who were at one point on the cusp of a championship breakthrough that never materialized. The Clippers don’t want their name added to this list and have done everything possible to fully join the league’s elite.

Last summer the team hired Doc Rivers as their senior vice president of basketball operations and head coach. Once thought to be frugal, the team has undoubtedly opened up its wallet with two max contracts on the books and a payroll exceeding $72 million this season. Lastly, as a style point, the team took the bold move to cover up the Lakers’ title banners in Staples Center on game days in order to plot their own destiny.

The Pacific Division has been dominated by the Los Angeles Lakers for a long time. The Sacramento Kings and Phoenix Suns have also experienced sustained periods of success over the last decade. But now it is the Los Angeles Clippers and Golden State Warriors who lead the Pacific, which goes to show that nothing lasts forever, even when it comes to the Lakers and Clippers.

With this in mind, let’s take a look at each of these teams and assess who has the brightest future.

Victor Oladipo can’t believe his first NBA season is already coming to an end. Eighty-two games is a lot, but it flies by during a player’s rookie campaign as they’re adjusting to a new league and lifestyle.

“It’s crazy, seems like yesterday I was in the NCAA Tournament, about to play at home in front of my family and friends in the Sweet 16,” Oladipo told Basketball Insiders. “Now, I’m in the NBA. Time really does fly. We definitely can’t take every day for granted.”

The Orlando Magic guard has had an eventful year. Not only did he face NBA competition for the first time, he had to transition to a new position since the Magic have him spending a lot of time at point guard, a position he had never played prior to this year. Until this year, Oladipo had always been a shooting guard. It’s the position he played growing up and throughout his three-year collegiate career at Indiana. Now, he’s being asked to play the role of floor general for Orlando, starting at point guard in half of the Magic’s games and backing up veteran Jameer Nelson in the other half.

Sixteen teams will compete for a title while 14 look forward to the May 20 NBA Draft lottery — well at least the franchises that didn’t trade away their first-round pick.

Looking ahead to the 2014 offseason, a number of teams project to have cap room.  In a six part series, projections were made for each team, division by division (Southeast, Southwest,Atlantic, Pacific and Central and Northwest).

Player and team options, non-guaranteed contracts and the draft lottery could shift the numbers dramatically, but the 30 NBA franchises fall into just a few tiers:

The United States Junior Select team took a two-game losing streak against the World Select Team into Saturday’s Nike Hoop Summit, a game that annually pits the best of the American senior high school class against the some of the best players 19-and-under from the rest of the world. It is the premier scouting event of the high school All-Star circuit because the coaches and players actually try to win. The World team began practicing in Portland on Monday, while a smarting USA basketball* brought in its players a day earlier than normal, beginning practices Wednesday before staging two-a-days Thursday and Friday.