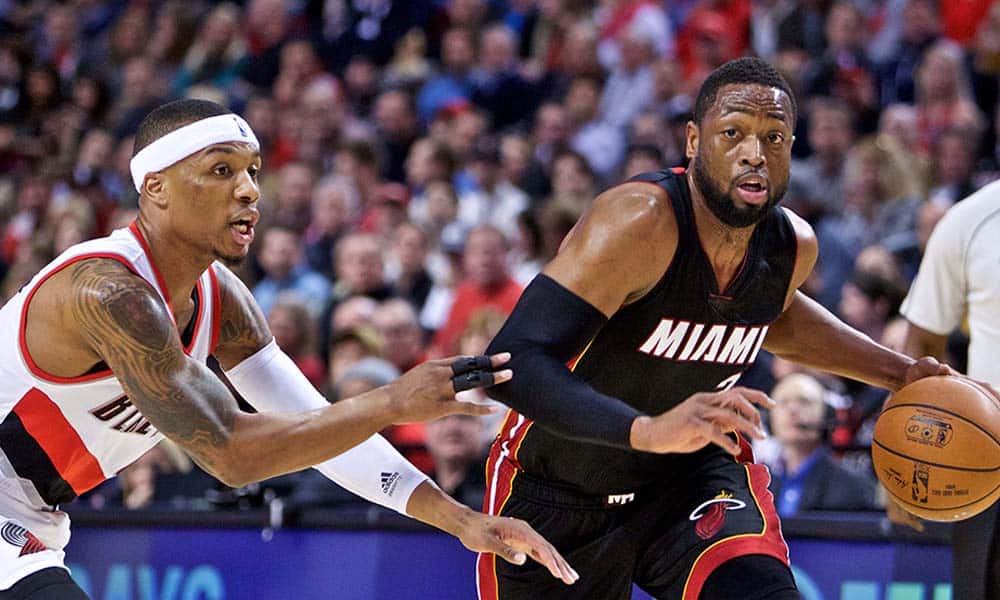 From sea to shining sea. From the sunny shores of South Beach to the Pacific Northwest in Portland, the National Basketball Association features an array of teams from all corners of the country.

Just as diverse as the geographic makeup of the team’s that comprise the league are the way they choose to do business.

Dwyane Wade is to the Miami HEAT what Kobe Bryant is to the Los Angeles Lakers, Tim Duncan is to the San Antonio Spurs and Paul Pierce was to the Boston Celtics.

And as each respective player encroached upon the final years of their respective careers, their situations were handled as differently possible.

There are many routes to the NBA. Some players are drafted and thrive right away. Some players must prove themselves in Summer League, training camp or the D-League to earn a roster spot and then make the most of their opportunity. Some players go overseas, improve their game significantly and then return to the United States more prepared than ever to make an NBA team and have success.

Sometimes, succeeding in the NBA comes down to opportunity. There’s this belief that the gap between an NBA reserve and an overseas player is enormous, but that’s simply not the case. That’s why, each year, players make the jump from playing abroad to playing in the NBA and do well. Sometimes, a player just needs to be in the right place at the right time to showcase their talent to the NBA world. Look no further than Hassan Whiteside as an example of a guy who bounced around abroad – playing in Lebanon and China as well as four D-League teams – before breaking out with the Miami HEAT this season.

Xavier Silas knows this all too well.

The Best No. 2 Overall Picks in NBA History

So much attention is paid to which player will be taken with the first overall pick that it’s easy to forget just how many great players are chosen every year with those other 29 first-round selections. The second overall pick, for example, has been loaded historically with really good players—sometimes even better than the players who were chosen ahead of them. Here’s a complete list of the No. 2 picks in history.

And here’s a look at the best No. 2 picks of all-time:

Draft Rumors Not Always What They Seem

A pretty common response to noise, especially noise in the media, is to mistake the lack of noise for lack of action. When it comes to the NBA Draft and the process NBA teams use to select players, this couldn’t be more accurate.

In the case of UCLA big man Kevon Looney, the narrative about his draft status isn’t necessarily lining up with what’s being said and there are some reasons for it.

Sometimes a player has to take a step away from his dream in order to achieve it.

Jamil Wilson’s goal is to play in the NBA. After four years of college basketball (one at the University of Oregon, three at Marquette University), he went undrafted in 2014. Wilson, who was waived by the Phoenix Suns during training camp, played last season in the Development League, positioning himself for another run at the pros this summer.

“Last summer I had a lot going on,” Wilson said. “There was just a lot coming at me, I had to adjust to a lot of things. Now, after being through it, the space is clear. Now, I don’t have much to think about, just go in and work every day and try to get better at what it is I’m setting on.”

From Undrafted to Postseason Hero

Cleveland Cavaliers point guard Matthew Dellavedova has become one of the most polarizing players during the NBA playoffs this season.

His rise to fame didn’t seem all that likely just a few months ago. After all, this is a second-year player who has a career regular season average of just 4.7 points per game and an average playing time of 19 minutes per game. He fought his way onto the team after going undrafted in the 2013 draft and signed a two-year, $1.3 million deal.

But since the end of the regular season, Dellavedova has become a household name among basketball fans – for both good and bad reasons. Depending on what end of the spectrum you fall on, Dellavedova is either viewed as a “dirty” player or a hero. Chicago Bulls and Atlanta Hawks fans would probably fall into the former category, while Cavaliers fans would clearly say he’s the latter.

After four consecutive trips to the NBA Finals, which included two titles, the Miami HEAT organization finds itself in an unfamiliar place this time of the year – at home watching the postseason festivities (or in the case of All-Star guard Dwyane Wade, in a suit at the Finals in the broadcast booth).

The HEAT, who lost four-time MVP LeBron James last summer in free agency, are now watching the forward push an injury ravaged Cleveland Cavaliers squad to the verge of a championship. Not surprisingly, Miami missed the playoffs this season and finished below .500 for the first time since the 2007-08 campaign.

Heading into the summer, the HEAT face plenty of questions on the future direction of the franchise. The squad certainly has talent, but are still in search of a few assets to get back into the title picture.

With every postseason comes a number of highlighted themes – factors of the game that become emphasized in a different environment. Some are new revelations born of tactical back-and-forth reaching a conclusion point that can be applied by others in the league, others are reminders of long-understood ideas that may have fallen into the background. In some instances, minutiae unearthed in a given playoffs becomes standard league practice moving forward.

What have been the key lessons of the 2015 postseason so far? Let’s have a look.

Point guard prospect Emmanuel Mudiay showed off his skills on Thursday, with an open workout for the media at Impact Basketball in Reseda, CA.

Mudiay, who played last season in China, is projected to be at least a top-six pick in the NBA draft.

Recently he worked out with the Lakers (No. 2 pick) in Los Angeles and the Knicks (No. 4) in New York.

“I did Lakers and New York so far,” Mudiay said. “I went to New York.  It was cool.  I liked getting to know Coach [Derek] Fisher and [President] Phil Jackson. Allan Houston is on staff, and I’m a big fan of his, so I learned a lot from them.”

When the New Orleans Pelicans fired Monty Williams on May 12, there was some bewilderment among fans and people around the league. The Pelicans made it to the postseason for the first time since 2011, winning a season-saving game in the regular season finale against the San Antonio Spurs to knock the Oklahoma City Thunder out of the eighth and final playoff spot in the Western Conference. The Pelicans were eventually swept by the Golden State Warriors, but those same Warriors were coming off a historically great regular season and are now just two wins away from hoisting the Larry O’Brien trophy.

Shortly after the news of the firing broke, names of potential replacements started appearing. Tom Thibodeau, Jeff Van Gundy and Alvin Gentry were the three names mentioned most frequently. Thibodeau, known as a defensive guru, certainly made sense considering the Pelicans were ranked 22nd in defensive efficiency, despite having Anthony Davis and Ömer Aşık protecting the paint. Nevertheless, the Pelicans eventually hired Gentry, who is known for pushing the pace on offense. New Orleans ranked 27th in pace this season, so it is clear that the Pelicans’ front office prioritized offensive improvement over defensive improvement, despite finishing ninth in offensive efficiency this season. So now the question is, what happens when you add an offensive-minded coach to a team featuring a superstar talent like Anthony Davis?