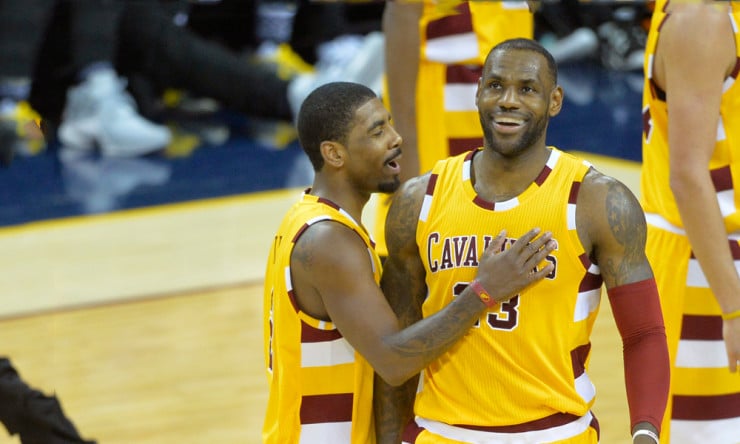 Draymond Green may have made some enemies and lost a few friends during these playoffs, but let’s face the facts: the NBA would probably be a better place if more players were like him.

In Green, the league has seen the emergence of a superstar from an unlikely source — a doughy, undersized forward who didn’t become a full-time starter until his junior year in college.

Somewhere between then and now, 34 players were deemed more valuable. He went from playing for a minimum salary and backing up David Lee to earning nearly a maximum salary and being a linchpin on one of the greatest NBA teams in history.

I have no problem admitting when I am wrong. And I was wrong about Green — he’s one of the greatest players I have ever seen.

With the NBA Draft less than two weeks away, many key NBA talent evaluators have descended upon Treviso, Italy, for the annual Adidas Eurocamp, a spotlight event featuring 40 international players (many of whom are draft-eligible) competing in games and drills.

Here were some of the standouts from the first two days.

Adonis Thomas’ Road Back to the League

Free agent Adonis Thomas is healthy and ready for another chance to play in the NBA.

Thomas last appeared in training camp with the Detroit Pistons last season, but was cut after suffering a leg injury that kept him out for most of the preseason. The decision for the Pistons to cut Thomas was a bit difficult to make as he was one of the best players during training camp.

“The first week of camp, I mean, go back and check the numbers from our scrimmages, he was one of the top four or five guys out here early on,” Pistons head coach Stan Van Gundy said at the time.

Is Derrick Rose On His Way Out?

Yesterday, ESPN’s Chad Ford and Marc Stein revealed that the Minnesota Timberwolves are gearing up for a hefty offer to the Chicago Bulls for guard Jimmy Butler, suggesting a package built around the fifth overall pick and several roster players.

There is little doubt that sounds attractive to the Timberwolves. But, as the report points out, the Bulls are not actively considering trading Butler – at least not yet. League sources in Italy say the Bulls are actively open to moving guard Derrick Rose and that seems to be the first choice rather than shopping Butler.

Last week, I examined 15 guards whom Phil Jackson and the New York Knicks can realistically target in free agency. Today, I’ll look at forwards and centers who are set to hit the open market in July and would be a good fit for New York.

The Knicks’ starting frontcourt – featuring Carmelo Anthony, Kristaps Porzingis and Robin Lopez – was actually one of the better frontlines in the Eastern Conference last season. They also have Kyle O’Quinn under contract for three more seasons. In addition, 2015 second-round pick Guillermo (Willy) Hernangomez has expressed interest in coming stateside after a strong season in Spain. Hernangomez, whose contract with Real Madrid expires at the end of the month, is a 6’11 center who played alongside Porzingis during KP’s final season in Europe. It will be interesting to see if the Knicks are able to sign Hernangomez to play in NYC next season and, if so, what kind of contract that will require.

Around this time last year, Jahlil Okafor had just led Duke to the national championship and was on the verge of being selected with the No. 3 overall pick in the 2015 NBA Draft. He would go on to join the Philadelphia 76ers, emerging as a potential franchise cornerstone and then becoming the team’s go-to option on offense once the 2015-16 NBA season started.

These days, Okafor has seen his name surface in trade rumors, he’s been on the receiving end of criticism, he’s rehabbing his right knee after undergoing surgery for a small meniscus tear and Philadelphia’s 10-72 record makes this by far the least successful basketball season of his life.

The way the Chicago Bulls ended their season, it’s no wonder that teams are working under the assumption that the front office is interested in completely overhauling their roster. As Steve Kyler reported in Tuesday’s AM report, it’s much more likely Chicago would be willing to move Derrick Rose than Jimmy Butler in executing that overhaul, but there’s not a hoops fan alive who doesn’t understand Butler is the more valuable asset.

Chicago has Butler on a great contract for the foreseeable future and has a track record of executing “win-now” philosophies rather than complete rebuilds, so it seems much more likely that John Paxson and Gar Forman would put more work into rebuilding a pseudo-contender around Butler this summer than shipping off their lone All-Star in exchange for younger pieces that could initiate a full rebuild. Still, that hasn’t stopped the rumors that teams are interested in acquiring Butler through whatever means necessary.

Patience Could Go A Long Way For The Lakers

While other teams are reportedly scrambling and hoping to meet with some of the bigger names on the free agent market – such as Kevin Durant, DeMar DeRozan, Al Horford, Hassan Whiteside and Harrison Barnes among others – perhaps the Los Angeles Lakers should take a slightly different approach and consider continuing to mold their roster around the young talent they already have such as D’Angelo Russell, Jordan Clarkson (assuming he’s re-signed since he’ll be a restricted free agent), Julius Randle, Larry Nance Jr. and, of course, their second overall selection in the 2016 NBA Draft.

Do Or Die For Cavaliers, Warriors

Do or Die. As we approach Game 7 of the NBA Finals, the Golden State Warriors and Cleveland Cavaliers are in a do or die scenario. Win on Sunday, take home the Larry O’Brien trophy. Come up short on Sunday and legacies will be redefined and the losing team will go home with an empty feeling for the ages. These are the only options. Win the hardware or go home empty handed.

Throw away all of the ridiculous talk about rigged games and outrageous conspiracy theories. But the NBA couldn’t have dreamed up a more ideal scenario for a conclusion to the 2015-16 season.

The story lines here are abundant and plentiful.

Tristan Thompson Has Been Key for Cavaliers

When the Golden State Warriors won the 2014-15 NBA Championship, many people complained that they were fortunate to avoid several top-level Western Conference foes and that their Finals victory came against a decimated Cleveland Cavaliers team. The Warriors certainly heard the criticism from people inside and outside of the league and subsequently spent this entire season destroying teams at a historic rate in an attempt to prove last season was no fluke.

The Warriors sure did grab the NBA’s collective attention this season. Stephen Curry put together one of the best individual seasons of all time. Klay Thompson continued to improve his overall game, while putting together some timely clutch performances during the regular season and the playoffs. Draymond Green also improved his overall game and is now firmly established as one of the best overall players in the league. In addition, the Warriors’ role players have collectively stepped up all season and provided the sort of depth that most teams have no hope of competing with over 48 minutes on any given night.

Thompson, Love and Value in the Eye of the Beholder

The intersection of sports and business is illuminated in its most fascinating light through player contracts. In virtually no other industry are so many details of an individual’s workplace compensation so public, nor so vital from a competitive standpoint: Some Fortune 500 company overpaying an executive is merely an overage, but one truly egregious NBA contract can doom a billion-dollar franchise for years. Talent and success beget rewards and promotions in all fields, but nowhere else is this reality so multi-faceted and potentially explosive.

Conversations related to individual player value, even among ostensibly informed folks, often reveal how hard it can be to separate these additional variables from our typical assessments. Just take the case of Cleveland Cavaliers big men Kevin Love and Tristan Thompson.