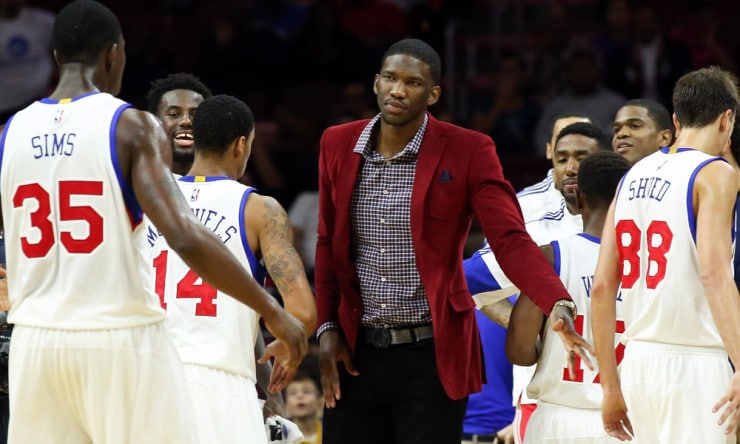 It’s Not Over for Joel Embiid

Back in October 2013, the Miami HEAT visited Brooklyn’s Barclays Center to take on Paul Pierce and the new-look Nets in a rather spirited preseason game.

I’ll never forget an interview from that night. I sat down with Greg Oden, who had recently signed a one-year, minimum contract with Miami in an attempt to rejuvenate his career.

Oden discussed what life was like as a youngster drafted with the expectations of the world thrust upon his mighty shoulders. He recalled the tribulations of his journey since being drafted with the first overall pick in the 2007 NBA Draft.

The Gems Of the 2016 Free Agent Class

In July of 2016, 249 players have contract terms that could make them a free agent. This number includes 56 players with team options, 32 players that have potential qualifying offers and 29 that have player options. There are 87 players looking at unrestricted free agency, while 43 players have some level of non-guaranteed money attached to them, with the biggest being new Houston guard Ty Lawson, whose entire $13.213 million salary for 2016 is non-guaranteed.

While there are a lot of guys headed into the free agent pool in some capacity, there are a couple of names worth watching:

While there are a few transactions here and there that could still happen this offseason, most of the major roster moves have already gone down. Players have been drafted, trades have been made and free agents have signed, and now we head into the 2015-16 season with a pretty good sense of which teams and players will make improvements, and which will fall flat on their faces.

The following list of six players all improved their situations this summer by changing teams. The guys mentioned below changed addresses and now find themselves with good opportunities to contribute and win after (for whatever reason) a year ago they were not necessarily as fortunate:

Myles Turner is stopped almost daily as he walks around Indianapolis. When you’re the No. 11 pick in the NBA draft (and 6’11 with a unique haircut), that’s bound to happen. Fans spot him and ask for a picture or autograph, or just to wish him good luck in the upcoming season. The 19-year-old enjoys these interactions, and his first impression of his new home has been overwhelmingly positive.

“It’s really a lot like Austin, my college town,” Turner told Basketball Insiders. “There’s kind of a lively, good vibe to it. More than anything, the people love their sports down here, man. They love their Indianapolis Colts and you know they love their basketball down here. That’s one thing I noticed right away. I mean, anywhere I went, people knew who I was and told me they are looking forward to the season. I like that everybody knows what’s going on.”

For Kevin Jones, Road to the NBA a Constant Tryout

Kevin Jones has been in this situation before. A different time, a different place, but the objective is the same. Ten years later, he still wants to prove he belongs.

As a freshman, making the varsity team at Mount Vernon High School in New York was considered a longshot for Jones. Few ninth graders made the squad in general, and there wasn’t much buzz surrounding him leading up to tryouts.

Barely a teenager, Jones believed he was good enough to battle against the upper classmen. The coach saw it, too. Following a hard-fought competition, Jones earned a place on varsity.

Which Non-Playoff Teams Can Make the Jump to the Playoffs?

Each NBA season there seems to always be at least one team that shows significant improvement. Last season, the Milwaukee Bucks got off to a great start, led by new head coach Jason Kidd. The Bucks went 15-67 during the 2013-14 season, but improved last season to 41-41, which earned them the sixth seed in the Eastern Conference playoffs.

Of course, the Cleveland Cavaliers also saw a huge increase in wins last season after LeBron James returned home to join forces with Kyrie Irving and Kevin Love. The Cavaliers went 33-49 two seasons ago and are now coming off an NBA Finals appearance against the Golden State Warriors. The New Orleans Pelicans and Boston Celtics were also teams that made the jump from being a non-playoff team in 2013-14, to qualifying for the playoffs last season.

2015 Summer Has Been Mixed Bag For Raptors

There is no doubt the Toronto Raptors have firmly entrenched themselves as an Eastern Conference power player over the past two seasons. But despite the recent run of success, the franchise hasn’t been able to win a playoff series in the process. Most teams on their rise are humbled in the playoffs. This is not new and definitely not unique to the Raptors. However, the Raptors have been unceremoniously bounced from postseason competition in series where they enjoyed home court advantage and were the clear favorites.

The Raptors will head into the season, once again, as the clear frontrunners to win the Atlantic Division. But with an ever improving Eastern Conference the question is can this team, as currently constructed, advance deeper into the playoffs?

Coaching is an integral part of basketball. The head coach is basically the conductor of an orchestra. They make sure everything is going as planned, and make adjustments when it’s not.

It’s also understood that the NBA is a coaching carousel. The head coach is the easy fall-guy, so changes are made quite often. When there is dysfunction within a team, you can’t just get rid of problem players because they are the asset on the court so you want solid value in return, not to mention the salary cap issues involved. Those things just aren’t a problem when firing coaches, so they are often the first to go when things are going badly. Also, sometimes a general manager will bring in a new head coach to show that it’s not the roster (their work) that is the problem, but rather just poor coaching.

So fair or not, coaches are extremely expendable. It’s no wonder they usually don’t last long. That’s one reason why even recent Coach of the Year winners have been fired a few seasons later (or sooner, just as George Karl).

Nowhere is the influence of higher-level mathematics and predictive modeling, classified broadly by some as “analytics,” more noticeable in the NBA sphere than around draft time. So much of what makes this sort of data desirable on any stage is its ability to usefully aggregate groups of observations the human brain can’t possibly keep track of, and analyzing and projecting potential draftees is right up that alley. Even the most respected scouts in basketball can’t possibly keep track of 60 or more prospects’ worth of data, particularly elements the naked eye will always struggle to pick up – with translation to the NBA, be it from college or foreign play, chief among them.

Injuries are a part of the NBA. From rolled ankles to ruptured Achilles tendons, each season several players suffer a wide range of injuries, which often have a ripple effect. A small injury to a veteran could give a young player the small opportunity he needs to show he should be given more playing time. Major injuries sometimes lead to major opportunities for a player to take on a bigger role and show that he is ready to take on more responsibility and carry a bigger load for his team.

On August 4th, while playing for the Australian national team, Utah Jazz point guard Dante Exum suffered a torn ACL. Exum was driving into the paint and made a jump stop when his knee buckled, similar to Derrick Rose when he first tore his ACL in 2012. This injury is an unfortunate turn of events for Exum, age 20, and the Jazz, especially considering the optimism surrounding the team heading into next season.