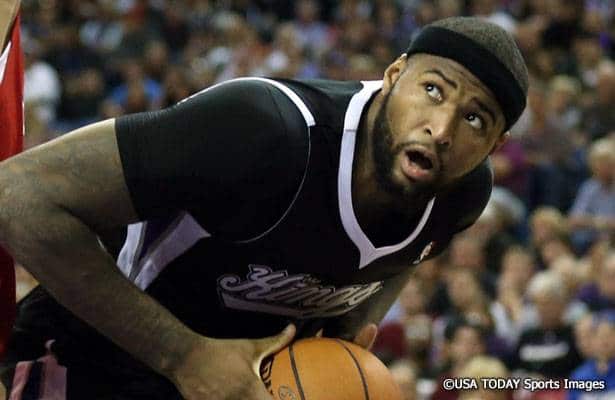 As the game has evolved over the last decade and the stretch four has become increasingly popular, more and more teams are relying solely on their center to protect the rim. The days of having two bigs with the ability to bang down low and control the paint seem to be rapidly fading away. This puts a premium on having a center that can, at the very minimum, change shots around the rim and ideally send some of those shots back. Additionally, with teams emphasizing floor spacing, more pressure is on the center to secure the rebound and keep second chance opportunities to a minimum. If you can find a guy who has the ability to do all that while also having a strong post game and passing ability on the offensive end, he can be the type of player who can transform a franchise.

Why the Clippers Traded Jared Dudley

On Friday, the Los Angeles Clippers waived Carlos Delfino and Miroslav Raduljica, whom they acquired (along with their own 2015 second-round pick) in exchange for small forward Jared Dudley and a protected first-round pick in 2017.

The trade was originally considered a questionable move by the Clippers, despite the fact that Jared Dudley had a down season in his one and only year with the Clippers. On paper, the Clippers only had Matt Barnes, Dudley, and second-year player Reggie Bullock, who played sparingly last season, at small forward. The depth at small forward was already a glaring issue for the Clippers, and Delfino hardly seemed like the answer moving forward as he missed all of last season with a significant foot injury.

In the sports world there is the expression – “Go Big Or Go Home…” Under Armour, a fledging player in the basketball shoe space did exactly that in their offseason offer to Thunder star Kevin Durant.

When news broke that Under Armour was winning out on the bidding process with Durant, there were reports that the deal would clock in north of $325 million. As is usually the case in these kinds of things, shoe figures are often massively exaggerated and focus in on what’s possible if all incentives are met. What’s real is what’s guaranteed and possible to earn and that’s where the numbers came down to earth a little bit. In the end Under Armour’s offer was said to be worth $265 million, with achievable incentives and inducements that could have gotten the deal to $285 million over the next ten years.

Nike, who has had Durant since he entered the NBA had the right to match the offer, and over the weekend they informed Durant and his agent that they would matching the deal. It’s believed that Nike is offering a different structure to their deal, but that’s the dollar figures will come close enough to get Durant to agree to the terms.

Not enough was made this offseason about what an admirable job the San Antonio Spurs did in keeping together the championship roster that was mighty enough to break up the LeBron James Dynasty in Miami. With loads of great contracts and plenty of role players willing to take less to remain part of something so special, there’s no question that the reigning champs keeping themselves intact was the least talked about major story of the summer.

Of course, not all defending champs are so lucky. Sometimes a dynasty just runs its course, and after that final title most of the major players (and sometimes even the coaches) all go their separate ways. Today’s list looks at the most egregious of those title defenses:

Dunc’d On: Not Time For USA to Panic

The Team USA critics are out in force again after what is apparently the most disastrous 21-point win in basketball history, a 98-77 victory over Turkey.  Nevertheless, I will admit to feeling that little ball of ice grow in my stomach as Turkey took a five-point lead into halftime and Team USA looked rather discombobulated. They scored a mere 35 points on 40 possessions in the first half, while Turkey managed a point per possession.  The US malaise continued as Turkey made three straight threes to lead 51-45 midway through the third quarter.  But the US took over from there to lead by 20 midway through the fourth quarter.  Overall, they scored 63 points on 44 possessions in the second half, holding Turkey to 37 points on the same number of tries.

Nevertheless, the story was that Team USA had been exposed by Turkey’s first half strategy, which was derided as little more than using a basic 2-3 zone and slowing the game down.  The implication was that this game proved the US had major problems, but a rewatch of the game proved this simply is not the case–at least based on this game.

The NBA’s Most Underrated Point Guards

As it goes with just about everything in life, someone or something doesn’t get mentioned nearly as often as they should and are often viewed as underrated or under looked. In the music scene, for example, certain artists or bands are viewed as more talented than maybe their record sales show or which awards they lose out on at the Grammy’s.

In the NBA, there are plenty of capable players at each position and more often than not there are only a certain number of players being talked about. When it comes to the point guard position, it seems like Chris Paul, Stephen Curry, John Wall, Damian Lillard and Kyrie Irving are among the names that are mentioned most often. While those players have earned the right to dominate those conversations, there are a number of other point guards that should be receiving more praise than they are.

Here are five point guards (in no particular order) that are often overlooked and deserve to be talked about more:

So far in the 2014 FIBA World Cup, Team USA is 3-0 with a 35.6 point average margin of victory. They did have a little bit of a scare against Turkey recently and their toughest challenges are ahead with teams out of their group like Australia, Greece and Spain in particular really looking formidable. However, there’s no doubting now that despite the absence of some of the NBA’s biggest stars, a team capable of winning the gold has still been put together.

The depth of Team USA’s talent pool has been on full display. Anthony Davis and James Harden have taken over the leadership roles in place of Kevin Durant and Kevin Love, who opted not to play after originally considering it. This comes as no surprise. Davis is a former No. 1 overall pick who is coming off of his best year as a professional and was already on the fast track to stardom prior to the start of the tournament. Harden has been one of the best shooting guards in the league since being traded to the Houston Rockets two years ago and he came into the tournament highly motivated after an early exit from the 2014 NBA playoffs and wide-ranging criticism about his defense.

Somewhat surprisingly, though, is the fact that up to this point Denver Nuggets forward Kenneth Faried has been the third best player on a Team USA squad that also features Derrick Rose, Kyrie Irving and Stephen Curry among other more proven NBA players.

Casual fans will undoubtedly be watching the trajectories of the Cleveland Cavaliers and Miami HEAT this season since LeBron James’ decision to head back home via free agency sent shockwaves through the league. While Miami did a solid job, considering the circumstances, of retooling their roster after James’ departure, the Cavaliers will enter the season as the favorites in the Eastern Conference – if not the league as a whole.

But the Cavaliers-HEAT storyline isn’t the only worth paying attention as we prepare to head into training camp. There are plenty of instances of drama worth keeping an eye on this season.

Let’s take a look at a few:

It wasn’t long ago that Josh Smith was viewed as a borderline All-Star, someone who filled the stat sheet but seemed to be snubbed every year when the East and West teams were assembled. He was the face of the franchise for the Atlanta Hawks, making his presence felt on both ends of the floor and filling a highlight reel with ease.

Now, Smith is viewed much differently around the NBA. League insiders have characterized him as inefficient and selfish, and his tendency to settle for long-range jumpers drives coaches and fans crazy. He has also been labeled as overpaid, since the Detroit Pistons signed him to a four-year, $56 million deal last summer that made him the team’s highest-paid player. The Pistons went 29-53 last year and Smith received plenty of blame for the team’s disappointing season. Critics have said that his style of play isn’t conducive to winning, which is never how a player wants to be perceived in the NBA.

The NBA’s Most Underrated Small Forwards

While players like LeBron James, Kevin Durant and Carmelo Anthony deservedly headline most discussions about the top swingmen in the game, we’re going to take a moment to discuss five of the league’s most underrated small forwards as we head into 2014-15. This list won’t include the likes of Chandler Parsons, Gordon Hayward or anyone else that recently signed max deals as a result of no longer being able to be considered “underrated” by any stretch.

We continue our series that began with the point guards and shooting guards with today’s list of some of the lesser-heralded but very talented small forwards:

Is Anthony Davis the Heir to King James’ Crown?

The headline led to some raised eyebrows, and a few chuckles, because although Harden is an undeniably talented scorer, he has frequently shown little to no interest in defense. As a result, we can safely eliminate him from the “best all-around player” conversation.

In fact, there is no real debate. If we are going to attempt to answer the question: “Who is the best all-around player in the NBA?” – we can do so with one word. LeBron.

This is no direct knock Harden, as most top-tier athletes in each and every sport believe they are the best at what they do. It’s part of the reason for their success. However, it’s almost impossible to argue that anyone other than LeBron James is the best all-around basketball player on the planet. There is almost nothing James can’t do. He’s an elite scorer and the best playmaker on every team he’s ever played on. Furthermore, he can guard all five positions on the floor. When focused, he’s one of the league’s best defenders.

However, the argument over who is the “best all-around player not named LeBron James” is a conversation worth having.