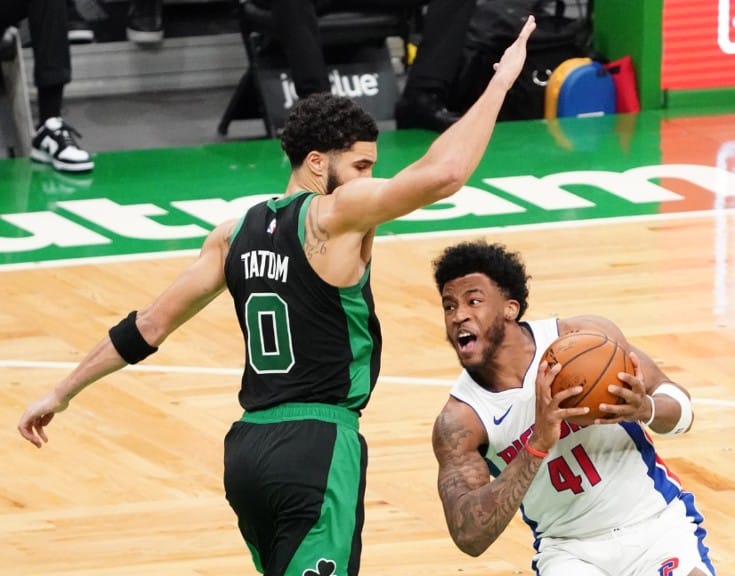 An eight game slate awaits us in the NBA Monday night. Headlining the day are match-ups between the Utah Jazz and Dallas Mavericks, Denver Nuggets and Golden State Warriors, and Los Angeles Lakers and San Antonio Spurs.

For those interested in NBA betting today, we’ll break down some of tonight’s best bets.

Check out the betting guide from our experts to learn how to make the best NBA Picks.

Saddiq Bey has been playing really good basketball of late, clearing this number in four straight games and 8 out of the last 10. Over the last 30 games, he is hitting this number 53% of the time, and we’re getting value on him having hit this at a 47% clip on the season.

Over his last ten games, Bey is shooting 40% from beyond the arc, averaging six rebounds and three assists per game. He went 6-for-8 from three against the Pacers on March 4th, and seems to have a much more confident stroke in the last two weeks.

The Pistons will be facing off against the Atlanta Hawks in this one, and the last time these two teams met was back on October 25th in the Pistons’ 3rd game of the season. Bey cleared this number in that match-up, putting up 21 points to go along with seven rebounds and 3 assists.

While the Hawks blew out the Pistons in that October match-up, I actually like Detroit’s chances at keeping this game close. They’ve been a marginally more respectable team over the last ten games, ranking 22nd in Offensive Rating and 25th in Defensive Rating over that span. Over the last five games, those categories improve to 16th and 21st, respectively. Kentavius Caldwell-Pope just smoked the Hawks for 38 PRA, so I like Bey’s chances tonight. I also would take his OVER 2.5 three-pointers made.

Bet Bey OVER 25.5 PRA at BetOnline

The Knicks dismantled the Los Angeles Clippers last night, and if you read my best bets article from yesterday you would see that I bet the Clippers while knowing it was probably square. I guess I got the wrong thing right.

But today, we are backing Knicks’ shooting guard Evan Fournier to have a bounce-back game, something he has a knack for doing. The previous three times that Fournier has fallen short of this line, he’s come back and smashed the over the following game. He went 3-8 from the field and 1-5 from three Sunday night, but has a golden opportunity tonight against the Sacramento Kings.

Fournier only played 29 minutes Sunday night, and will now face a Kings team that ranks dead last in the NBA in defense against opposing shooting guards. They are also 27th in 3PT% allowed. When these two teams met on January 31st, Fournier cleared this number in just 27 minutes. That game was a blowout, but the spread for tonight is just four points, so I like this one to stay close enough for Fournier to get plenty of opportunities.

Bet Fournier OVER 15.5 points at BetOnline