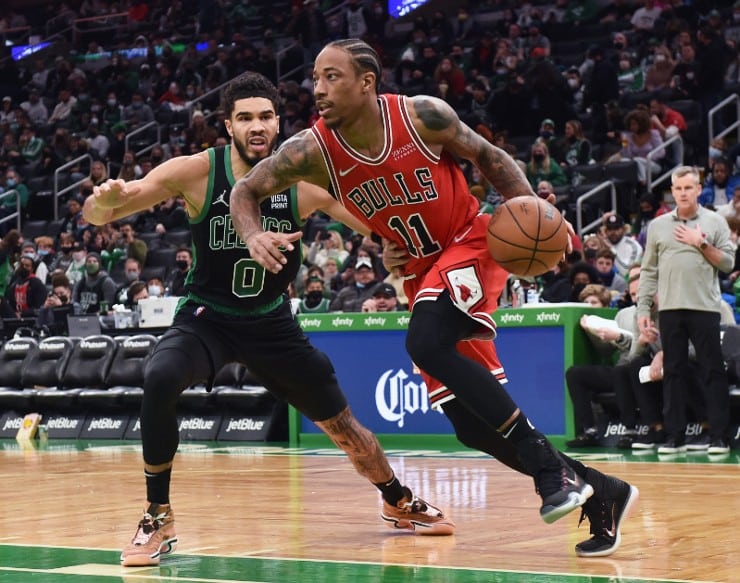 For tonight’s slate of NBA games, there are a total of six contests scheduled; free best NBA bets are available. Our analysts at Basketball Insiders have picked the winners for Wednesday night’s regular season games. The 2021-22 NBA regular season ends on Sunday, Apr. 10. Free best NBA bets, expert picks and BetOnline odds are featured below.

Entering this matchup, the Mavs rank fourth in the Western Conference standings. They trail the third-seeded Warriors by just one game. As for the Pistons, their playoff chances came to a close a long time ago. The tip-off time for this contest is 7 p.m. ET at Little Caesars Arena. Dallas is 4-0 in its last four meetings versus Detroit.

Furthermore, the Pistons have not defeated them since Jan. 31, 2019. In addition to Jerami Grant being out for the remainder of the season, Detroit will be without Marvin Bagley III and Corey Joseph. This is why oddsmakers have the Mavs as 8.5-point favorites away. Pick the Mavericks to win, they will cover the spread and the total will go over 220.5.

Next, for this contest, the Nets (41-38) are playing the Knicks (34-44) at Madison Square Garden. Brooklyn is a six-point favorite over New York. Though, the Nets have failed to cover the spread in their past five games. Also, they have won five of their previous 10 contests. With Julius Randle and Nerlens Noel sitting this one out tonight, it makes sense why Kevin Durant and the Nets are favored to win.

Not to mention, Brooklyn is 6-0 in its last six meetings against New York. And, the team is 8-2-1 ATS in its past 11 road games. Keep in mind, the Nets and Hawks have the same record right now. Brooklyn has to maintain a qualifying spot for the play-in tournament. All things considered, pick the Nets to win, the Knicks will cover the spread and the total will go over 229. Other best NBA bets are on the main page.

Moreover, the Wizards (35-44) are squaring off versus the Hawks (41-38) at State Farm Arena. This game starts at 8 p.m. ET. Needless to say, Washington has been without Bradley Beal for a significant chunk of this season. Even when Beal was healthy, the Wizards struggled to obtain wins. They are 0-5 in their past five matchups on the road against the Hawks.

Plus, Washington is 2-9 in its last 11 road games. On the other side, Atlanta is 7-3 in its previous 10 contests. Despite the Raptors putting an end to their five-game win streak, the Hawks are the hotter team right now. Since they are 10-1 in their last 11 home games, pick the Hawks to win, they will cover the spread and the total will go under 234.

Additionally, for this Eastern Conference battle, the Celtics (49-30) take on the Bulls (45-34) tonight at United Center. The tip-off time for this matchup is 8 p.m. ET. Boston is a 7.5-point favorite over Chicago. The Celtics are playing excellent basketball at the best time, and they currently have the same record as the Bucks and 76ers. All three teams trail the top-seeded Heat by 2.5 games. And, the Bulls must continue to win as well.

They are behind the fifth-seeded Raptors by only one game. While Chicago lost back-to-back contests, Boston is coming off two straight victories. The Celtics are 8-2 in their past 10 games played. Not only are the C’s 12-2 in their last 14 road contests, they are 13-5 in their previous 18 meetings against the Bulls. In short, pick the Celtics to win, the Bulls will cover the spread and the total will go over 221.5. Best NBA bets articles are on the main page.

To shorten the text, let’s just say the Thunder have seven players out for the remainder of the season. The organization pulled the plug on them months ago. They have nothing to play for. On the flip side, the Jazz rank fifth in the Western Conference. Utah trails fourth-seeded Dallas by two games.

Nonetheless, the Jazz are 4-6 in their past 10 contests. The team leads the Nuggets by half a game. If Utah drops another one tonight, they run the risk of falling to the sixth spot in the standings. On top of the Jazz winning 13 of their past 14 home games, the total has gone under in 12 of their last 14 contests. Pick the Jazz to win, the Thunder will cover the spread and the total will go over 220.

Oddsmakers could not determine a favorite in this matchup. Phoenix is 8-2 in its previous 10 games played, but the team has lost two of their last three contests. For one important betting trend, the Suns are 16-4 in their past 20 road games. Having said that, they are also 3-15 in their last 18 road matchups versus the Clippers. Phoenix won the first two meetings this regular season. On Jan. 6, the Suns won 106-89 at home.

Then, the Suns defeated them 103-96 at home for a second time on Feb. 15. With the Suns having the number one seed locked up, the Clippers have more to play for. So, Los Angeles potentially winning this one tonight should come as no surprise. Though, bettors might be tempted to play it safe. Pick the Suns to win, they will cover the spread and the total will go over 226.5. Free best NBA bets are on the main page.

BetOnline is one of the best sportsbooks in Arizona, California, Georgia, Michigan, New York, Oklahoma, Texas, Utah and Washington D.C.