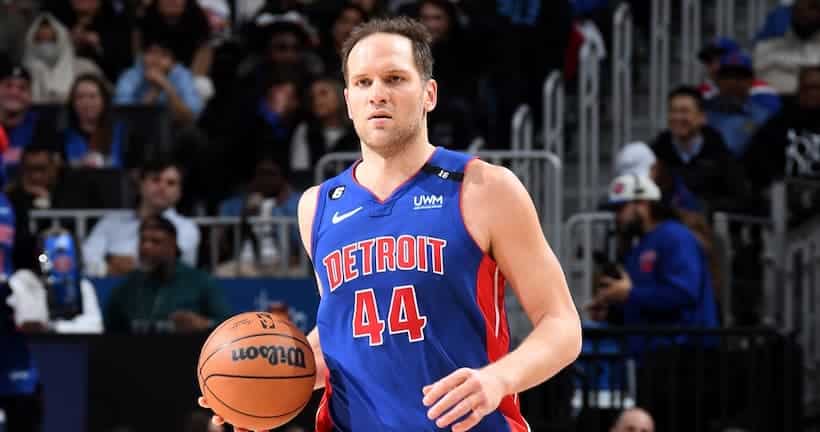 The Chicago Bulls and Detroit Pistons met yesterday in Paris for a rematch for the first time in Paris since 1997 when Michael Jordan was still in Chicago. It was a thrilling contest yesterday, but the Bulls would outlast Detroit in the end. In their loss last night, SF Bojan Bogdanovic reached a career milestone 10,000 points vs the Bulls.

Playing last night in Paris in front of a sold-out Accor Arena, Bodganovic scored 25 points and had three triples along with five assists on a 9-20 shooting night from the field. He was doing everything he could to keep his team in the game even when his triples were not hitting at his normal consistency.

His performance on Thursday notched him over 10,000 career points and it’s a huge milestone in his career. It’s also a feat that not many Detroit players have done. Michigan Sport Betting sites have the Piston’s (100000) to win the Finals this season.

Bojan showing some bounce off the back door cut📈 pic.twitter.com/PRSIhCpMNd

Despite the team not having much success this season at 12-36, Bogdanovic is still having a nice year averaging a career-high (21.3) points per game. He’s shooting 49 percent from the field, 39 percent from deep, and 88 percent from the free-throw line. Bogdanovic was traded in the offseason from the Utah Jazz to the Piston’s in exchange for Kelly Olynyk Sabon Lee, and cash considerations.

His season-high this year is 38 points which came in a 124-117 loss the LA Lakers. That is not the only record he’s broken this season. With 28 points vs the Timberwolves on New Year’s Day, he became the highest all-time scorer in the NBA from Croatia.