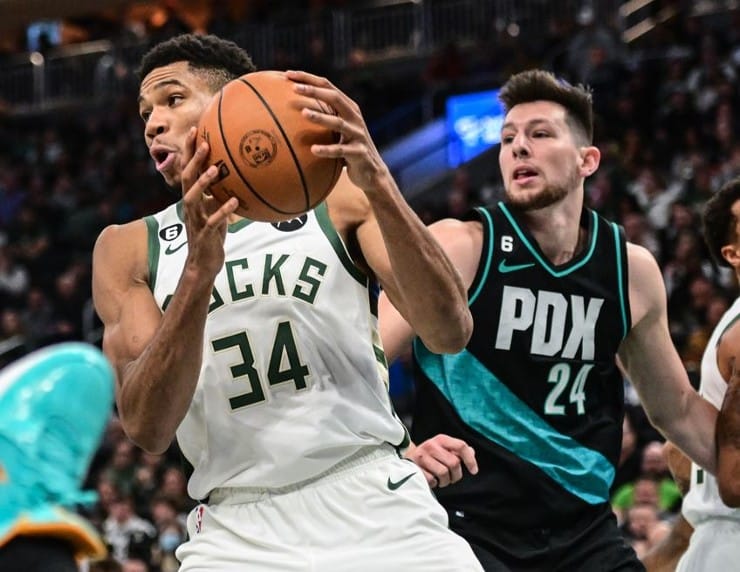 “Yeah, it definitely looked like they wrapped him up,” Budenholzer said when asked his thoughts on the Greek Freak taking hits to the neck or head area, and the officials ruling infractions common fouls. “They went above his head.”

Per multiple NBA betting sites, the Bucks have the second-best odds to win the championship in 2023. A few sportsbooks are giving the Boston Celtics the highest odds to return to the NBA Finals this season.

“They hit him across the forehead. Live, it looked like a fragrant foul,” continued the Bucks coach. “Even though it’s going to the other end of the court, live and as it happened, I don’t see how that’s not a Fragrant 1…

When you go high and above the shoulders to wrap someone up and just look like a non-basketball play, I don’t know… I just think sometimes the hits that Giannis is taking, the league needs to look at them.

While the league already does a lot to protect superstars like LeBron James, Luka Doncic, Nikola Jokic, Kevin Durant, and Antetokounmpo, some players are not taking full advantage of their free throw shooting.

The Greek Freak is one of them.

For fouls in the act of shooting, Antetokounmpo is the most fouled player in the NBA this season. The six-time All-Star is averaging 12.8 free throw attempts per game.

Despite leading the league in attempts at the foul line, the Bucks forward is making only 57.5% of his free throws. Out of the top-100 players sent to the line this season, Antetokounmpo has the lowest shooting percentage.

Joel Embiid is averaging 12.2 free throw attempts, and the Philadelphia 76ers center is shooting 83.6%. Likewise, Dallas Mavericks guard Luka Doncic is logging 76% at the line, based on 11.4 attempts per game.

Instead of worrying about the officiating, it would benefit the Bucks to improve their free throw shooting. The team ranks 29th overall (71%). For a championship contender, this is pitiful.

With a 12-4 record, Milwaukee ranks second overall in the Eastern Conference. On Wednesday, the Bucks play the Chicago Bulls at 8 p.m. ET. This matchup can be watched live on NBC Sports Chicago.