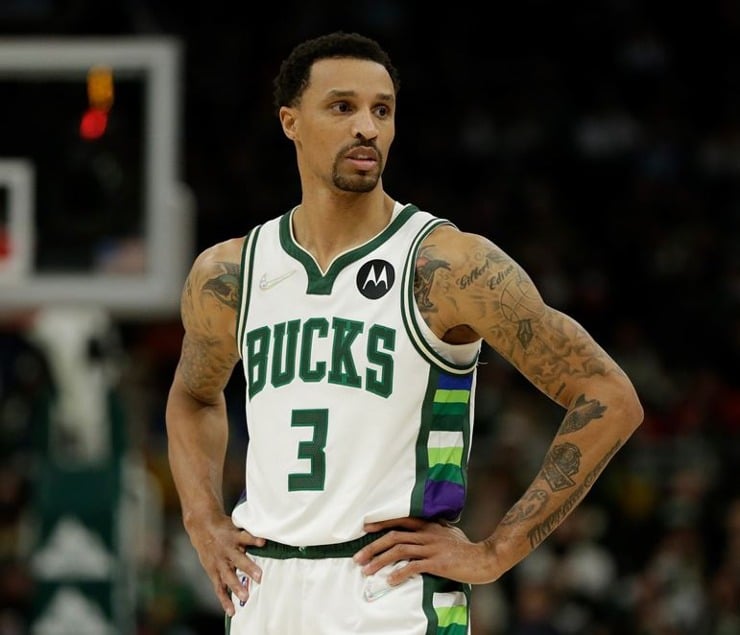 Milwaukee Bucks guards George Hill (illness) and Jrue Holiday (conditioning) have been downgraded to out for Wednesday night’s road game versus the Toronto Raptors. To add to the list, Joe Ingles (conditioning) and Khris Middleton (knee) are also out.

According to multiple NBA betting sites, the Bucks possess the second-best odds to win the championship. While they still trail the Boston Celtics, sportsbooks are giving them better odds than the Brooklyn Nets.

Bucks will be without Jrue Holiday and Joe Ingles (return to conditioning), Kris Middleton (knee) and George Hill (illness) vs. Raps tonight. Raps sheet is clean other than Porter Jr. Bucks played in Washington last night, Giannis played 37 minutes (and had 55 pts!).

Through 30 games off the bench this season, Hill is averaging a career-low five points per game. In addition to logging 2.1 rebounds, 2.6 assists, and 20 minutes per contest, the 15-year veteran is shooting 42.7% from the field.

Hill has missed the last three games and was absent in a total of seven this season. Of course, the guard’s best performances out of his 30 appearances came against the New York Knicks (Oct. 28) and Oklahoma City Thunder (Nov. 9). He scored 12 points in both matchups.

As for the Raptors’ injury report, the only player listed is Otto Porter Jr. (foot). He remains out indefinitely. Moreover, Toronto is 11-14 versus Eastern Conference opponents, whereas the Bucks are 12-9 against their conference teams.

Leading into Wednesday night’s game, the Raptors have won their last three meetings versus Milwaukee. However, Toronto is 3-9 in its past 12 contests this season. Not to mention, the team is 1-5 ATS in its previous six home games.

Despite Milwaukee’s struggles, Giannis Antetokounmpo is playing lights out. In the Bucks’ 123-113 win over the Washington Wizards on Tuesday, the six-time All-Star scored a career-high 55 points.

Per ESPN’s Basketball Power Index, the Raptors have a 62.6% chance of beating the Bucks at home. Sportsbooks show Milwaukee as a 5.5-point underdog at Scotiabank Arena.