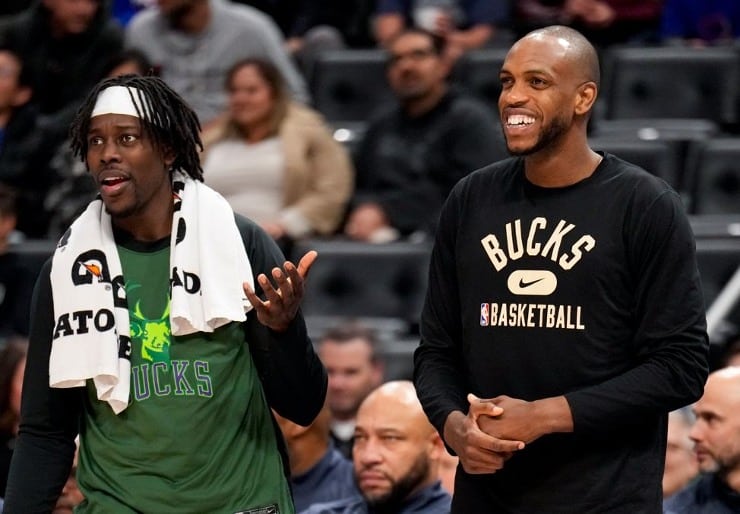 According to Milwaukee’s injury report, Holiday and Pat Connaughton are listed due to non-COVID illnesses. As for Middleton, the three-time All-Star remains out indefinitely because of a wrist injury.

Based on some NBA betting sites, the Bucks have the second-best odds to win the championship in 2023. Check out which sportsbooks are showing higher odds for the Boston Celtics in the Eastern Conference.

The Bucks’ injury report for tonight has been updated.

Additionally, Middleton underwent surgery during the offseason to repair a torn ligament in his left wrist. While the forward has yet to make his 2022-23 NBA season debut, the Bucks sent him to practice with the Wisconsin Herd, the team’s G League affiliate.

“He’s been making progress, probably steady and slow,” Bucks coach Mike Budenholzer said of Middleton. “We’ll just continue to see how he feels tomorrow. Hopefully, he can be doing a little bit more each day.”

Likewise, Joe Ingles is in a similar spot. In the offseason, the former Utah Jazz guard signed a one-year, $6.5 million contract with Milwaukee. But he still needs more time to recover from his knee injury.

Ingles has not played since last season. While with Utah, Ingles tore his left ACL in the Jazz’s 126-106 win over the Minnesota Timberwolves on Jan. 30, 2022.

During the offseason, when asked if Ingles would return within the first few months of this season, Bucks G.M. Jon Horst mentioned, “something in that December timeframe, January timeframe.”

Furthermore, the Cavaliers are working around injuries as well. Kevin Love (thumb) and Caris LeVert (ankle) were downgraded to out for Friday night’s matchup. Not to mention, Ricky Rubio (knee) and Dylan Windler (ankle) remain out indefinitely.

Per ESPN’s Basketball Power index, the Bucks have a 50.9% chance of defeating the Cavaliers. Of course, Milwaukee is entering this contest as a four-point favorite at home.