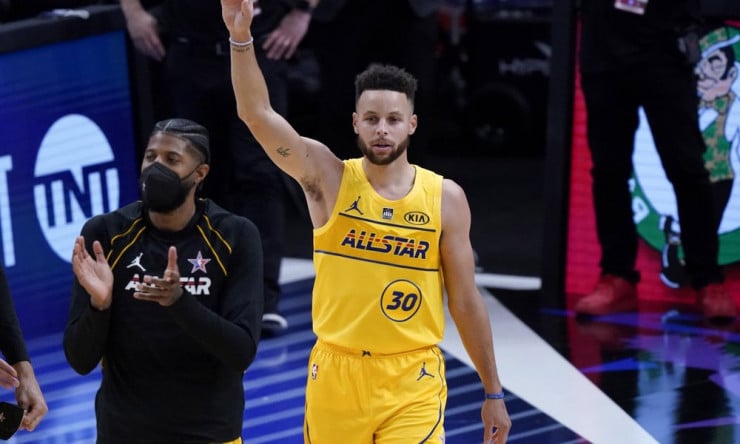 er can make a team but Golden State Warriors’ Steph Curry is attempting to defy that theory. Golden State is having a modest season by their high standards but they are in touching distance of the playoffs.

The fact that Golden State is even in contention is almost solely down to Curry’s performances on the court. With around one-third of the regular season remaining, the question is whether he can sustain that form and drive the Warriors all the way to the Championship game.

On April 20th against the Philadelphia 76ers, Stephen Curry returned no fewer than 49 points as his franchise cruised to a 107-96 win. This was the 11th game in which the Point Guard had landed more than 30 points and that’s an incredible run, even by his own world-beating standards.

Curry’s form is carrying GSW to an extent: After 58 games of the regular season, there was perfect symmetry in the Warriors’ return of 29-29. Winning just 50% of their matches at this stage of the campaign put the side in ninth place in the Western Conference and that’s only enough to put the team in the play-in rounds.

The aim from here must be to reach the playoffs without going through those preliminary stages. There’s enough basketball to be played for Golden State to reach the top six and make that target but it’s clear that Steph Curry will be pivotal to that aim.

Anything can happen in the remainder of the 2021 NBA season but the sportsbooks don’t rate Golden State Warriors as genuine championship contenders. According to basketball betting odds, as supplied via asiabet.org, the impressive Brooklyn Nets are the favorites to win the pennant at the end of the campaign.

In the chasing pack behind the Nets, the LA Lakers, LA Clippers, Utah Jazz, and Milwaukee Bucks are attracting some interest. As for Golden State, they are way down the list in the outright winner market.

In fact, Stephen Curry and his men are the 17th favorites to win the ultimate prize in 2021. There are 16 teams with a better chance of winning, according to those sportsbooks, and that’s not an encouraging assessment.

As the NBA regular season continues, the markets are sure to adjust depending on results. Asiabet will be ready with updates on odds and they will also provide news and opinion to complement the numbers. Anyone looking to get involved with NBA betting can also consider new sportsbooks and a host of sign-up deals and other promotions for extra value.

Can Curry do it?

The issue for Golden State Warriors is the fact that they seem almost wholly reliant on Steph Curry right now. Of course, there is a supporting cast but their experienced point guard is pivotal to their success moving forward. If he were to suffer a dip in form or an injury that forces him away from the court, GSW may conceivably finish outside of those play in places and be eliminated at the first hurdle.

The good news is that Curry is returning points at record levels. That run of 11 straight games with 30 points or more is the first time that a player aged 33 or over has hit this mark. Curry has also recorded 10 or more three-point scores in six games so far this season. No other player has hit more than five in a season in their entire career.

The point guard also has more 40 point games in a single month than any other player of his age and above.

Little is certain but if Steph Curry stays fit, he will surely finish the season as the NBA’s leading scorer. Whether he can drive Golden State Warriors into the playoffs and beyond is another question but, if anyone can do it, Stephen Curry can.