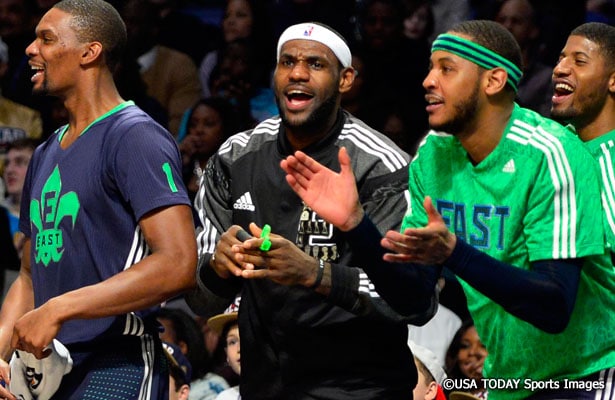 If we learned anything from free agency over the last couple of years, it’s that the obvious free agency destinations seem to be the most unlikely.

In 2010, it seemed all but decided that LeBron James was either staying in Cleveland or heading to New York. That was the story for months. Almost no one talked about Miami as a destination, and surely not for all three of Miami’s current All-Stars Chris Bosh, Dwyane Wade and James.

Steve Nash’s free agency was supposed to land him in either New York or Toronto. The Los Angeles Lakers were barely in the discussion, yet they came away with the two-time MVP.

No one had Paul Millsap on Atlanta’s radar last summer nor did anyone have Charlotte on Al Jefferson’s radar, and let’s not even talk about the Golden State Warriors, who last summer not only got serious consideration from Dwight Howard, but landed Andre Iguodala.

Which brings us around to the point – free agency is unpredictable.

This weekend, while having a casual conversation with Frank Isola of the New York Daily News, the topic of Knicks forward Carmelo Anthony came up. And while we both agreed that all signs point to Anthony staying in New York, there are some interesting options that he will likely consider, especially if the master plan laid out by the Knicks in July is underwhelming.

The L.A. Lakers and Chicago Bulls get mentioned the most, mainly because both will be in a position cap-wise to make offers that might be attractive to Anthony.

Sources close to the situation in Chicago say it’s highly unlikely the Bulls would meet the MAX-dollar asking price Anthony would likely be seeking. As things stand, the Bulls have $63 million in committed contracts for the 2014-15 season.  There is a common belief that Chicago would use their one-time amnesty provision on the final $16.8 million of Carlos Boozer’s contract, which would get them to $46.2 million, or roughly $13.8 million under a projected 2014-15 salary cap of $60 million. If the new cap figure comes in a little higher, the Bulls would have more to play with.

The general sense of things is that Chicago would only consider using the amnesty provision on Boozer if they were able to land a major free agent and surely Anthony is that. The problem is that a first-year salary of $13 to $15 million would be a massive pay cut for Anthony, who is eligible to receive a first-year salary of 105 percent of his current $21.388 million salary in his new deal regardless of who he signs with.

Would Anthony leave some $7.45 million per year on the table to be a Bull? The only way Chicago could get enough cap space to sign Anthony to a full MAX-level deal would be to basically give away forward Taj Gibson and his $8 million 2014-15 salary. Are the Bulls willing to pay Boozer $16.8 million to go away, give Gibson away for basically nothing and pay Anthony $100 million?

The Lakers will have the cap space to be a major player for Anthony as well. They would be able to offer Anthony a full MAX-level offer, but given how little the Lakers have to work with on the existing roster, are the Lakers really any closer to a title than the Knicks? Would they get any closer with $23.5 million locked into guard Kobe Bryant and another $22.45 million to a soon to be 30-year-old Anthony?

There is no doubting that adding a star of Anthony’s caliber is a Laker kind of move, but is that the best use of the Lakers’ salary cap space and does a Bryant-Anthony duo really have a shot in the West? The Lakers can create a little more breathing room under the cap by using the new stretch provision in the Collective Barging Agreement on guard Steve Nash, but even the extra $6 million the Lakers can secure in that move gets off-set by the $23.5 million owed to Bryant, $900,000 owed to Robert Sacre and a player option on Nick Young worth $1.227 million. In total, the Lakers are looking at roughly $28 million before $22.45 million to Anthony, leaving them with just $9.55 million to flesh out the rest of the roster. Anthony could agree to a little less in a deal with the Lakers to free up room for other guys.

Which bring us to the firestorm Frank tossed this way yesterday.

According to @stevekylerNBA Carmelo could join Miami if LeBron, Wade, Bosh & Melo all sign for $14 million. That is the Heat media's dream.

The Houston Rockets have $56.983 million in salary cap commitments in 2014-15. If they can off-load Omer Asik and/or Jeremy Lin’s $8.374 million contracts, they could get under the cap and offer Anthony the opportunity to play with James Harden and Dwight Howard.

The Miami HEAT have just $2.038 million in guaranteed contracts next summer. All three of Miami’s major stars can opt out and create massive flexibility for Miami, not only in re-setting the luxury tax clock for the HEAT to continue their run at championships, but making it possible for Miami to make a run at Anthony. Depending on what each is willing to re-sign for, the HEAT could have anywhere between $57 and $60 million to work with in free agency.

In 2010 all three of Miami’s star players agreed to first-year deals just under $15 million each. They all sacrificed a little money so that Miami could re-sign Udonis Haslem and Joel Anthony. Would they do it again to add Anthony to the mix and make sure they can deliver on their initial promise of “not one, not two…” championships?

With the Indiana Pacers closing the gap aggressively, would the HEAT need another major guy to off-set what’s coming at them from Indiana?

Would Wade trade in his remaining two contract years worth a combined $42.6 million in exchange for a new three- or four-year deal? Wade left the most money on the table in Miami to create the current situation, would he do it again in July?

The HEAT have cap issues of their own to manage. Haslem has a player option worth $4.62 million that would eat into what Miami has to play with if he opts in, but given that all three of Miami’s stars would have to buy into a “take less plan” would Haslem do the same in exchange for a seat at the table on the next evolution of the HEAT? Miami big man Chris Andersen has a $1.44 million player option for next year, but would he cash that in for another deal around the same minimum-level money to remain on the roster awhile longer?

There are a lot of interesting options for Anthony to consider.

The first and most obvious option is to remain in New York, sign a massive new contract and try to build his own winner with the projected cap space the Knicks will have in the summer of 2015. A summer where Anthony could recruit guys like Rajon Rondo and Kevin Love to form his own Big Three in New York.

Anthony clearly shifted the onus onto his current team this weekend in New Orleans. He made it clear then that he wants to retire as a Knick and that he wants to hear the plan for a championship run from New York before making his free agency decision. So clearly the Knicks are on the clock and have the means to secure Anthony going forward.

But in free agency, the expected outcome is rarely what happens. For Anthony there are a number of options to consider, even if staying in New York is the most likely outcome.