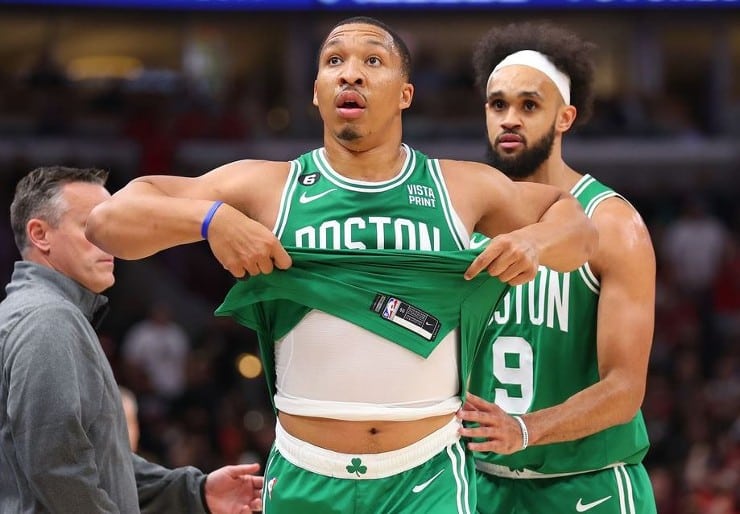 Boston Celtics forward Grant Williams has been issued a one-game suspension by the league for “recklessly making contact with and directing inappropriate language toward a game official” during Monday’s loss to the Chicago Bulls.

According to ESPN NBA Insider Bobby Marks, Williams’ suspension will cost the forward $29,698. Plus, the Celtics will receive a tax variance credit of $14,849.

A few NBA betting sites are giving the Celtics the No. 1 odds to win the championship in 2023. However, some sportsbooks are showing higher odds for the Golden State Warriors and Los Angeles Clippers.

Boston Celtics forward Grant Williams has been suspended one game for his role in ejection Monday night vs. Bulls.

Boston will receive a small tax variance credit of $14,849 https://t.co/ZUG6rUhjdH

At the 8:58 mark of the fourth quarter, Williams fouled Bulls guard Zach LaVine in the paint. His feet were still moving, so the referee blew his whistle. The forward then got up from the floor and ran towards the Celtics’ bench.

While running towards the bench, the wing bumped the referee. He was then automatically ejected. Watch the video below. Contact with an official will always result in a suspension and small fine.

Williams was selected 22nd overall by Boston in the 2019 NBA Draft. On Friday at 7:30 p.m. ET, the C’s take on the Cleveland Cavaliers at TD Garden. The fourth-year player will serve his one-game suspension then.

For their season opener, in the Celtics’ 126-117 win over the Philadelphia 76ers, Williams ended his performance with 15 points, 1 board, and 1 assist in 24 minutes of action. He went 8-for-8 shooting overall.

During the second round of the 2022 NBA Playoffs, the first-round pick scored a career-high 27 points in Game 7 of the Celtics’ 109-81 win over the Milwaukee Bucks.

In Game 3 of the NBA Finals against the Golden State Warriors, Williams also scored 10 points in 20 minutes on the court. When he’s not bumping refs — whether accidental or not — the General is a top-5 player on the team.

Then, Williams averaged 4.7 points, 2.8 boards, and 1 assist in 63 appearances during the 2020-21 season. The Tennessee product has improved every season of his NBA career.