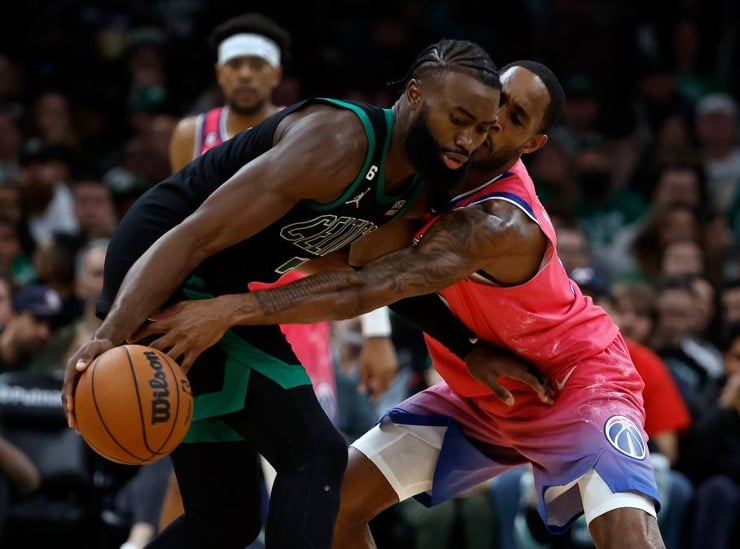 Without Jayson Tatum on Sunday, in the Boston Celtics’ 130-120 win over the Washington Wizards, Jaylen Brown scored a season-high 36 points on 13-of-23 (56.5%) shooting from the field.

Following the win at TD Garden, Brown was asked if he alters his tactics with Tatum off the court. “Nah, I keep going,” responded Brown. “I’ve been doing it this whole time.”

According to a few NBA betting sites, the Celtics remain the top favorite to win the championship in 2023. Check out which sportsbooks are giving the Milwaukee Bucks the best odds to defeat Boston in the Eastern Conference.

"I think I'm capable of doing anything and everything" 💯

Jaylen Brown (@FCHWPO) talks with @ChrisForsberg_ after his 36-point night vs. Washington pic.twitter.com/RuXwZDrDg5

“I think I’m capable of doing anything and everything,” added the Celtics forward. “So, just coming out here playing with my teammates, having fun, and letting the game take care of itself.”

After the win over Washington, Marcus Smart recalled moments during the 2015-16 season when rookie Brown played sloppier and more carefree. While still aggressive when attacking the basket, the California product needed time to grow.

“His excuse was: ‘When everybody is telling me to slow down, the defense hears that, so I’m going to speed up,'” explained Smart on the young Celtics star. “We’d be like, ‘No, that doesn’t make any sense.’

“He’s using more of his grace now, to where he’s understanding that sometimes just be patient and let the game come to you instead of going and get it yourself.”

Jaylen Brown finishes with the left!

He has a season-high 36 PTS for the @celtics on NBA League Pass
📲 https://t.co/1pomQZN8Pi pic.twitter.com/4cKAziki2o

Furthermore, Brown is averaging a career-best true shooting percentage of 60.4%. The Celtics forward has improved each season. His player efficiency rating of 19.9 ties his career best from the 2020-21 season as well.

“I enjoyed just playing basketball,” Brown mentioned. “It’s what the season is about. There’s going to be guys in, guys out. We’ve got to be able to maintain our level of play when our big dog is not in the rotation. It was fun. It challenges everybody to step up in their roles.”