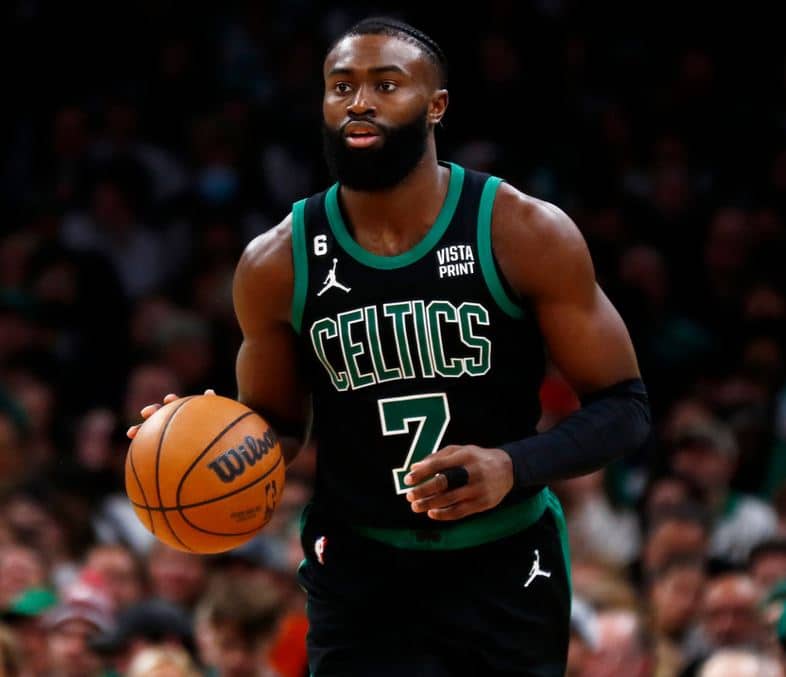 Jaylen Brown believes the Boston Celtics played down to their competition against the Oklahoma City Thunder on Tuesday night because Shai Gilgeous-Alexander was absent. As it turns out, the Thunder shocked fans everywhere, winning 150-117 at Paycom Center.

“We probably had it coming to us,” said Brown after the crushing loss. “We pick and choose when we want to play — wasn’t connected, didn’t have each other’s back out there, no help on defense. They embarrassed us.”

According to a few NBA betting sites, the Celtics remain the top favorite to win the championship. Check out which sportsbooks are showing the best odds for the Brooklyn Nets and Milwaukee Bucks.

"We probably had it coming to us… we pick and choose when we want to play… they embarrassed us."

Jaylen Brown gets candid after tough loss to OKC pic.twitter.com/w4qEyuIuQa

Brown ended his performance scoring a team-high 29 points, along with amassing one rebound and two assists in 26 minutes of action. Also, he shot 11-of-18 (61.1%) from the field and knocked down two 3-pointers.

During the third quarter, Marcus Smart was ejected for arguing a call. More importantly, the Thunder scored a whopping 150 points, their most since the franchise relocated to Oklahoma City. Their previous record was 149 points set back in 2013.

Of course, Oklahoma City led 74-54 at halftime. In the third quarter, the Thunder outscored the C’s 48-37. This was Boston’s worst defensive outing of the season. At one point, OKC had a commanding 37-point lead.

The Thunder drop 150 points on the Celtics, their most in a game since the franchise relocated to Oklahoma City.

150 is the tied for the 2nd-highest total the Celtics have allowed in franchise history, only behind allowing 160 to the Pistons in 1979. pic.twitter.com/6HUVU0uXgV

“You have to play with a sense of humility every night knowing your opponent wants to beat you,” Celtics interim coach Joe Mazzulla said. “We have to match that, and we didn’t. We got outplayed in every aspect of the game.”

Moreover, the C’s lead the NBA in scoring, averaging 117.9 points per game. However, Boston is mediocre this season defensively. Factoring in Tuesday night’s loss, the Celtics are now allowing 113.3 points per contest, which ranks 15th overall.

Last season, the Celtics had the top-ranked defense. Boston remains half a game ahead of the Nets in the Eastern Conference standings and lead Milwaukee by 1.5 games. After winning four straight, the Celtics are now working to recover from back-to-back losses.