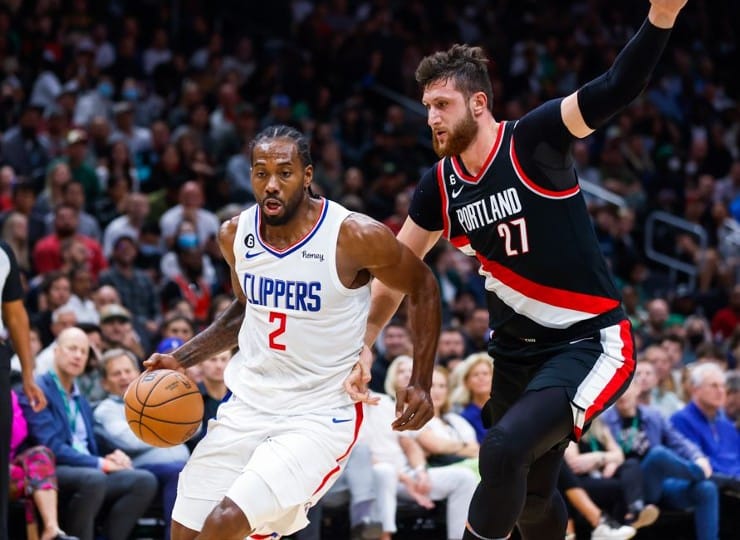 Los Angeles Clippers forward Kawhi Leonard played in his first game on Monday night since injuring his ACL in Game 4 against the Utah Jazz during the 2021 NBA Playoffs.

In the Clippers’ 102-97 preseason win over the Portland Trail Blazers, the five-time All-Star ended his performance with 11 points, 4 rebounds, and 2 assists in 16 minutes of action. Plus, he shot 3-of-8 from the field and sank a 3-pointer.

A few NBA betting sites are giving the Clippers top-5 odds of winning a championship in 2023. Will they advance to their first NBA Finals in the 2022-23 season? Compare the sportsbooks’ odds.

While Leonard feels stronger after spending the past several months in the gym, his shots were off against Portland. After the Clippers game, the 10-year veteran explained his underwhelming outing.

“[The timing] is going to come,” Leonard said about his sluggish showing. “I am going to be rusty. Legs definitely felt healthy. A lot of lactic acid in them.”

“But as that time goes on, the rhythm will get back, the footwork, the spacing, the timing. Just knowing playcalls, getting used to the crowd, getting used to T-Lue calling plays on the fly, my teammates yelling, the breathing, all that is going to come.”

Furthermore, Leonard also explained that he doesn’t play five-on-five or two-on-two in the offseason. So, his only contact with players came during training camp.

Though, instead of scrutinizing the two-time Finals MVP, fans should be happy to see Leonard back playing with the Clippers. Like everything else, it will take time for the 31-year-old to play at a high level.

Head coach Ty Lue said Kawhi’s body is almost back to normal. After coming back from a major injury, that’s all that matters starting out.

For other good news, fellow teammate John Wall is back playing as well. In Monday’s preseason game, Wall finished with 5 points, 1 rebound, and 3 assists. However, the former Rocket is also rusty. He shot 1-of-4 from the floor.

With Kawhi Leonard and John Wall healthy, the Clippers are a solid playoff contender in the Western Conference. And Paul George finally has more help.