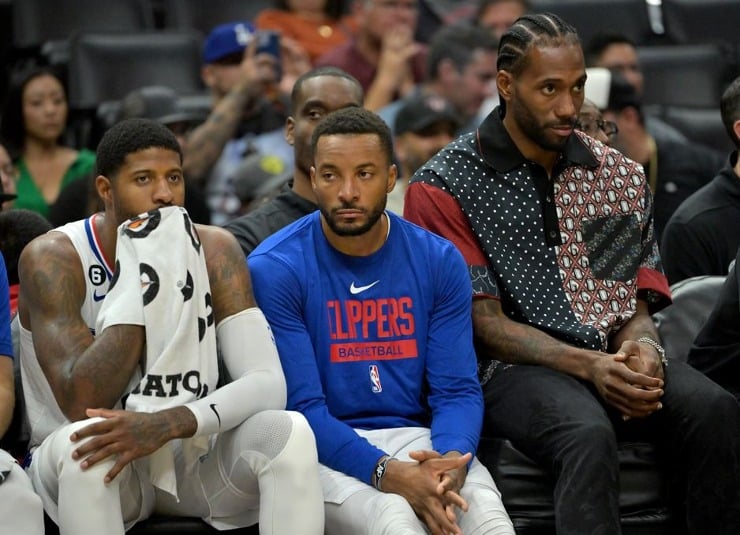 Los Angeles Clippers forwards Paul George and Kawhi Leonard have been ruled out for Friday night’s road matchup against the Denver Nuggets.

George is still recovering from a right hamstring tendon strain, whereas Leonard has remained out since suffering a right ankle sprain. Luke Kennard (calf) was downgraded to out as well.

According to a few NBA betting sites, the Clippers have the fourth-best odds to win the championship in 2023. Check out which sportsbooks are favoring the Golden State Warriors in the Western Conference.

Clippers injury report for Black Friday is unchanged from yesterday.

Kawhi Leonard, Paul George, Luke Kennard, and the Ontario trio are out vs Nuggets.

Wouldn't be surprised if the injured Clippers are done until December.

Furthermore, George has not played since sustaining his injury in the Clippers’ 119-97 win over the San Antonio Spurs last Saturday. Through 16 starts this season, the wing is averaging 23.6 points, 6.0 rebounds, 4.3 assists, and 1.6 steals per game.

Not to mention, George is shooting 45.8% from the field and 37.2% from deep. The Nuggets are using the seven-time All-Star in 30.9% of their plays with the forward on the court, and George’s true shooting percentage is 58.4%.

Meanwhile, Leonard has missed time since injuring his ankle in the Clippers’ 121-114 win against the Utah Jazz on Monday. The forward had already missed 13 games prior to his ankle injury because of knee injury load management.

Of course, in Leonard’s first two appearances this season, Clippers coach Tyronn Lue had the two-time Finals MVP come off the bench. He finished with 14 points and seven boards versus the Lakers to open the season.

Then, the five-time All-Star contributed 11 points and six rebounds three days later. After resting his knee via load management, Lue decided to move Leonard back into the starting lineup.

As a starter, the two-time Defensive Player of the Year has struggled this season. In three games, Leonard fell short of finishing with at least one steal. However, he did shoot 62.5% from the floor in last Saturday’s game.

Ty Lue says Kawhi Leonard woke up with soreness yesterday so he’s being held out. No timetable offered for his return, nor for the returns of PG or Luke Kennard.

“Woke up with some soreness in his ankle,” Lue said of Leonard, following the Clippers’ 124-107 loss to the Golden State Warriors.

“Saw the play, it was a little more than we thought. But he’s OK, feeling better, getting better. So, we don’t know a timetable right now though.”

More importantly, the Nuggets are also dealing with a number of injuries. On Friday, Jeff Green (knee) and Bones Hyland (illness) were downgraded to out.

Entering Friday night’s meeting, the Nuggets are 3.5-point favorites. Per ESPN’s Basketball Power Index, the Nuggets have a 51.2% chance of beating the Clippers.