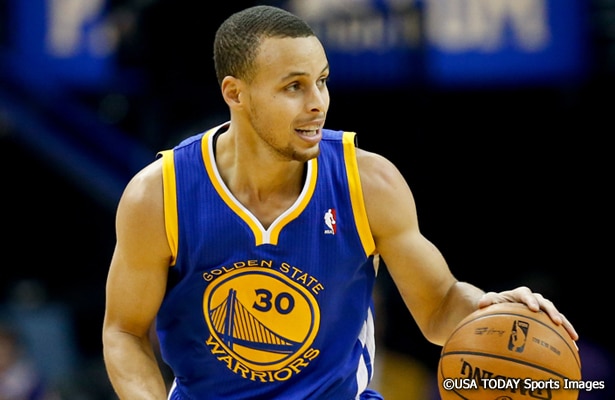 Don’t let the smooth face fool you, as Stephen Curry’s innocent and youthful appearance only serve as a deceptive portion of his attack. After leading the Western Conference guards in All-Star votes, Curry is not only determined to represent the Golden State Warriors well this weekend, he’s also already focused on what his team needs to do moving forward.

Whether you call him Wardell (his actual first name), the “Baby-Faced Assassin” or Steph, just make sure you call Curry a very deserving first-time NBA All-Star. His selection was far from a coincidence, as the fifth-year guard is currently in the middle of his best year as a professional and attempting to lead the Warriors beyond simply being everyone’s feel-good team from last season.

After succumbing to the San Antonio Spurs (who would go on to represent the West in the NBA Finals), the Warriors set out to improve through offseason additions like Andre Iguodala and internal growth. Curry has helped the Warriors strengthen from within with his extraordinary development, and he continues to be Golden State’s catalyst.

“[Being an All-Star] feels amazing, ” Curry told Basketball Insiders. “Having been close last year, and now a year later to be not only here but a starter is a dream come true. It’s all sinking in now that I’m actually here in New Orleans, going through the whole process of the weekend. So, I’m excited and ready to get to practice tomorrow, and then get on the court and have some fun.”

Averaging 24.6 points and nine assists per contest (both career highs), Curry’s development as an all-around player has been huge, but he actually appears to have made the biggest leap from a leadership perspective. Not only has he improved as a playmaker, his influence over the locker room and the huddle is evident. Curry has a natural tendency to use “we” statements and focus on the team’s  overall goals and direction rather than focusing on any personal accolades and accomplishments, which speaks directly toward the incredible team chemistry the Warriors have developed. Even during his first weekend as an NBA All-Star, Curry spoke of what he hopes to be a strong second-half push from his team.

“We had a tough end to the first half of the season with our last game against the HEAT,” Curry said, referencing Wednesday’s one-point loss to Miami. “[We need to] get rest and get everybody healthy. We’ve had some guys banged up, it’s definitely going to be beneficial for us. So, we’d like to work our way out of the downward turn we’ve had since our win streak. But if we come back healthy I think we’ll be alright, ready to finish strong and ready for the playoffs.”

He has similar confidence in his head coach, Mark Jackson, whose role in the team’s development clear as well. The relationship between a young star and his head coach is important and can be a strong determining factor for a team’s success. Fortunately for the Warriors, Curry and Jackson are on the same page and have a lot of respect for one another. Jackson’s mild-mannered approach, being both frank and ultra-supportive, seems to appeal to a player of Curry’s nature.

“Mark Jackson has been amazing,” Curry said. “When you think about David Lee being the first All-Star since Latrell Spreewell in ’97, and now myself as the first starter since ’95, you can think about just me and David and what we’ve done, but it’s all about Coach Jackson and our teammates, and how he’s inspired each one of us to kind of change the culture of what it is to be a Warrior basketball player, how to be a winning organization. His knowledge of the game, having played 17 years, being an analyst for a long time and being around the game [helps]. He’s done a lot in three years. So, hopefully, everybody recognizes that and how important he’s been to our success.”

In a rare circumstance to say the least, Stephen will be joined by both his brother, Seth, and father, Dell, in this year’s All-Star weekend events. Not only is Stephen participating in Saturday’s Three-Point Shootout and Sunday’s All-Star game, he’s also competing alongside Dell in the Shooting Stars competition on Saturday night. Meanwhile, Seth’s participation in Saturday’s D-League All-Star game rounds out what is a very busy, but exciting, weekend for the Curry family.

“Last night, we all went to dinner, and to see the whole family together all for a reason [since] we all have some type of event going on this weekend, it’s definitely fun,” Curry said. “Me and my brother grew up in the league, watching my dad play for 16 years, so to have all three of us putting on a jersey of some sort and representing the family on whatever level is definitely a blessing.”

As the Warriors head into the second half, they’ll have 29 games to improve upon their current eighth seed. At 31-22, the road will be tough, and the Warriors also have eight games against current Western Conference playoff foes. It certainly won’t be easy, but since the Warriors are only five games back of the fourth-seeded L.A. Clippers, it’s still possible that Golden State could secure homecourt advantage in the playoffs. Curry certainly gets it, and spoke at length about the team’s appreciation of the fans.

“When you watch a game on TV and see Oracle Arena, we call them ‘Dub Nation’ our fans, [you can see] how loud and passionate they are for the game, but it’s even more crazy in person,” Curry said. “I’m sure all that plays a part into us being an exciting team, and now that we’re winning it makes it even better.”

Last year, ‘Dub Nation’ proved to be more than ready to raucously root for their Warriors to extend the season beyond the Semifinals. This season, if healthy, the team finally appears to be strong and experienced enough to advance beyond those Semifinals for the first time since they lost a tough Western Conference Finals series (4-3) to the Phoenix Suns way back during the 1975-76 season.

Led by Curry, this Warriors team has truly bridged the gap between the longtime and new generation of fans. It’s been a long time since the Warriors made a deep postseason run (none of the current players were alive when they last reached the Conference Finals), but that very well cold change soon. The development of Curry as well as this organization’s revival have been magnificent to witness.