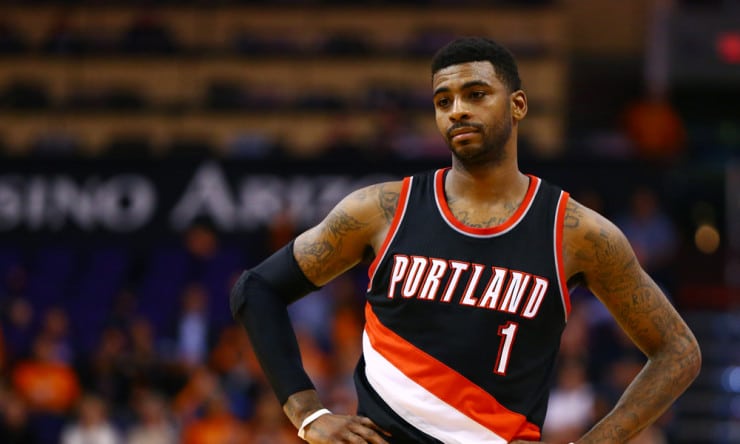 After spending four months in China playing for the Chongqing Dragons, veteran swingman Dorell Wright is an unrestricted free agent looking to join an NBA team. A number of franchises have shown interest in his services, but Wright is trying not to get involved in the talks until a deal is near completion.

“I have [received interest from NBA teams], but I’ve told my agent that I really don’t want to know anything until something is serious and set in stone,” Wright told Basketball Insiders in a phone interview. “I did that [free agency] waiting game this past summer, getting my hopes up and thinking this could be it, but it didn’t work out. Once something is set in stone and serious, I’ll know about it. Right now, I’m just working until I get that call.”

Wright is working out in the Bay Area alongside other former NBA players, “getting in the gym a lot, putting a ton of shots up, playing one on one and staying in shape.”

When asked what he’s looking for in his next NBA team, Wright didn’t hesitate.

“Opportunity. Somewhere I could play and contribute,” Wright said. “People know what I bring as far as shooting and leadership and being a professional. I’d like to go somewhere I could help build something for a series of years, not just somewhere I can go for the months remaining in this season. I want to be on a team that wants me, and wants me to be there for a long time. I’d like to be able to play and showcase what I can do, so that I could be there again next year with my family.”

Over the course of his NBA career, Wright has averaged 8.4 points and 3.8 rebounds while shooting 36.5 percent from three-point range.

His best NBA season was in 2010-11, when he started all 82 games for the Golden State Warriors and averaged 16.4 points, 5.3 rebounds, three assists and 1.5 steals while shooting 37.6 percent from long range on 6.3 three-point attempts per game. Wright spent last season with the Portland Trail Blazers, playing a reserve role in which he served as a veteran leader – averaging 4.6 points in 12.4 minutes while shooting 38 percent from three.

Blazers shooting guard C.J. McCollum was mentored by Wright last year and raved about him.

“D-Wright was and still is like a big brother to me,” McCollum told Basketball Insiders in a text message. “He always took the time to share his knowledge and experiences with me and taught me the importance of being patient and waiting for your opportunity. I still keep in touch with him now.”

Wright was one of many former NBA players in China and named Jordan Crawford, Pooh Jeter, Bobby Brown, Jeremy Pargo, Jonathan Gibson, Will Bynum, Ike Diogu and Von Wafer as some of the players who stood out to him in the CBA. He was impressed with the league and had a very good overall experience.

“The competition level was definitely different,” Wright said. “I joined one of the teams that finished near last place the year before, so I can definitely say that we did a lot better than people expected. We had a lot of good young players and, as far as the league overall, there are some really good Chinese players out there. They have some guys who can really play the game and I definitely think the league is up-and-coming. There are a lot of guys who are taking their game to China because they know it’s a great opportunity to play, you make very good money and then you’re able to get back to the States in four months to possibly even sign with another team. I think it’s great.

“Everything from the language barrier to the lifestyle is different from here in America. Thank God I had my translator, Roger, who really looked out for us and never made us feel like a burden. He made it clear that we could always call him, day or night. There were times he would wake up out of his sleep to help us communicate with whomever, so he definitely made our lives a lot easier. Some people in Beijing spoke English, but some people didn’t. That was one of the best things about being in a big city like Beijing, the fact that there were a lot of foreigners and people who would be able to speak English so we could communicate.”

Fortunately for Wright, he had made a number of trips to China in recent years and had very close friends in the CBA so he did enter his situation with some expectations.

“I did have an idea of what to expect because I’ve been with a Chinese shoe company [PEAK] for the last six years,” Wright said. “I had been back and forth to China a few times so I knew what to expect in terms of the culture and how everybody is and things like that. I was also lectured and taught about the CBA from my two closest friends, Pooh Jeter and Bobby Brown, who have been over there a few years. It was different, but they helped me a lot with the process and just the little things I should know once I got there, and everything they told me was correct.”

One thing that most NBA fans don’t know is that there are limitations on American players’ minutes in the CBA, which makes the monster stat lines that some of these guys post even more incredible. Wright explained how the minute restrictions work.

“I’ll break the whole thing down: Because my team finished in the bottom five out of the 20 teams, we were able to have three foreign players,” Wright explained. “I was our American. We had a European on our team, Esteban Batista. And then you also have to have an Asian import, and we had an Iranian point guard Mahdi Kamrani. So because he was our Asian import, he was able to play all four quarters. Me and the other foreigner, Batista, we had to sub for one another in the first and the fourth quarter. The only time that all three of us [imports] were allowed to play together is the second and third quarters. So if I’m playing in the first or fourth quarter, [Batista] is subbing out – and vice versa.”

While returning to the NBA is obviously Wright’s top priority, he is open to playing overseas again if the circumstances are right.

“Yeah, [I’d do it again] if it made sense. Like this past year, it made sense so it was a no-brainer, you know what I mean?” Wright said. “I knew that China had only a four-month season so I wasn’t taking both of my feet out of the NBA [pool]. It was kind of like having one foot in and one foot out since the season was so short and I could get back in the NBA. If another great overseas opportunity comes along like this one last year then sure, I’d go. It’s a no-brainer. At the end of the day, I have to take care of my family. I’m always going to make a business decision.”

Don’t be surprised if Wright jumps all the way back into the NBA pool soon.