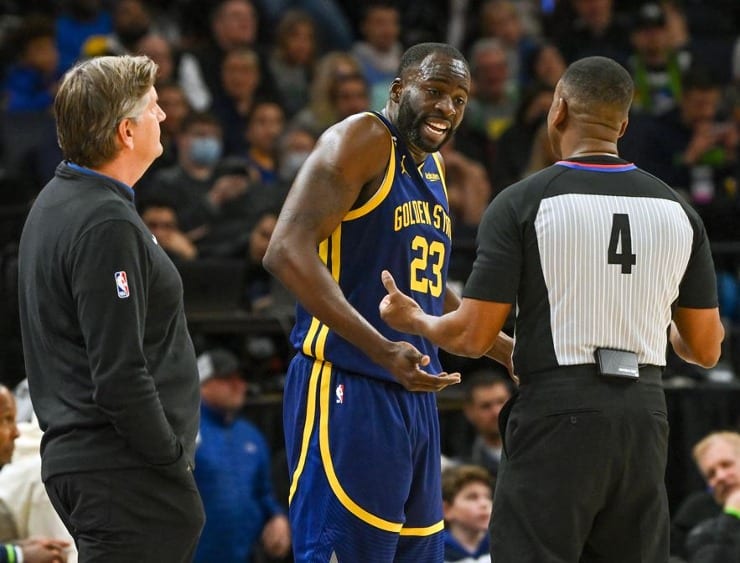 On Sunday, Golden State Warriors forward Draymond Green picked up his seventh technical foul of the 2022-23 season in a 137-114 win over the Minnesota Timberwolves, and the four-time All-Star trails only Kevin Durant for the most technical fouls this season.

With 1:19 remaining in the fourth quarter, Green was issued a technical from the bench after Jordan Poole drove to the basket and scored a layup. In the replay, Green was spotted dancing, hopping on one leg onto the lane line of the court.

Per multiple NBA betting sites, Draymond Green has the 11th-best odds to win Defensive Player of the Year in 2023. Some sportsbooks show higher odds for Brook Lopez, Rudy Gobert, and Giannis Antetokounmpo.

“It’s crazy. I probably got four techs this year that are questionable,” the Warriors wing said after the win. “They told me I was at the lane line, but I thought I was standing in the corner. So, I don’t know. It sucks, though.”

Less than a minute later, after Donte DiVincenzo hit a three-pointer, Stephen Curry received a technical foul for running to the baseline and waving a towel in celebration. It appears Curry’s technical was intentional, in order to show his support for Green.

“It’s the NBA, man,” added Draymond Green. “Your teammates make a good move; I didn’t affect the play. There was no one near me. So, it sucks. And the fact that that’s going to count against my tech count? Come on, that’s ridiculous.”

According to technical foul rankings by player for the 2022-23 season, Kevin Durant of the Brooklyn Nets leads the NBA with a total of eight.

If a player receives 16 technical fouls, the league will issue a one-game suspension to the violator. While Durant has moments of losing his cool on the court, Draymond Green will likely lead the league in technicals by the end of this season.

The 3rd quarter of the Warriors-Suns game had 7 technical fouls, which is tied for the most ever in a quarter… 😳 pic.twitter.com/O9Mx64bkFe

During the 2022 NBA Playoffs, the Warriors forward received four technicals in 18 games. But that’s nothing. In the 2000-01 season, Rasheed Wallace received 41 technicals in 80 games. Many fans believe it’s one NBA record that will never be broken.