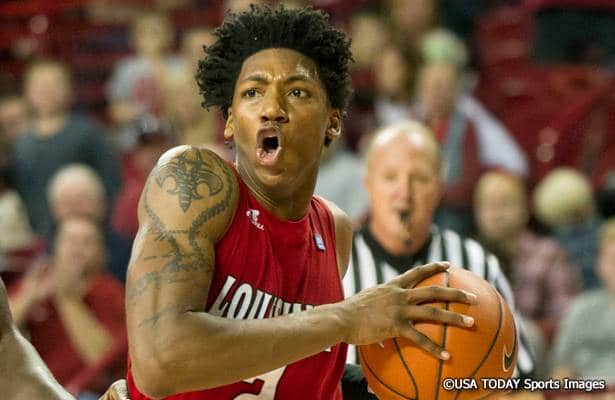 Entering this season, Elfrid Payton was one of college basketball’s best kept secrets. While he was capable of filling up the stat sheet every night and making an impact on both ends of the floor, Payton flew under the radar because he played for the mid-major Louisiana-Lafayette Ragin’ Cajuns, who were coming off of a 13-20 season.

Not only was he an excellent scorer, he was outstanding on the defensive end. In fact, he was so good that he recently won the Lefty Driesell Award, which is given to college basketball’s top defensive player. The Ragin’ Cajuns went 23-12 and made the NCAA Tournament as a 14-seed behind Payton’s strong play.

Throughout the season, the 6’3 guard had a number of signature performances to further solidify himself as one of the nation’s elite performers. He had a 34-point, 11-assist, 11-rebound, five-steal game in January against Louisiana-Monroe. He had a 31-point, 13-rebound, three-assist outing against Western Kentucky in March. In the tournament, he totaled 24 points, eight rebounds, three assists and three steals in ULL’s loss to three-seed Creighton.

“I just continued to put in work, studied film and played in the summer, which helped me a lot too,” Payton told Basketball Insiders. “I’ve grown a whole lot in recent years. Each year, my game has made a huge jump. I had a little chip on my shoulder, and that always helps in games. It gave me some extra motivation.”

As Payton continued to dominate, NBA scouts flocked to Louisiana to see him play in person. One scout who attended one of Payton’s games said that there were nearly 20 NBA talent evaluators in the gym, including several general managers, when he went to see him.

Now that Payton is on the NBA radar, he has a decision to make. Payton isn’t sure whether he’s going to enter the 2014 NBA Draft, and he says his decision will come down to where he’s projected to be selected. Right now, most mock drafts have Payton going at the end of the first round. But one NBA executive recently told Basketball Insiders that Payton could go actually in the late teens because some teams have him very high on their draft board.

If Payton has a shot at going that high and securing a guaranteed contract, going back to school would be a risk. With that said, he did admit that returning to ULL to try to win another Sun Belt title is tempting. The deadline for early entry is April 27, so he still has plenty of time to make a decision.

Whenever Payton does decide to go through the pre-draft process, he thinks it’s an environment that he’ll thrive in. It will give him the chance to go up against top players from bigger schools and showcase his talent. He compared it to when he started for Team USA at the FIBA U19 World Championship, helping the team win a gold medal.

“I do think I’d do well in that type of situation,” Payton said of pre-draft workouts. “I’m pretty sure it’ll be similar to when I was competing at the Team USA trials. That really helped my game a lot, being able to play with a bunch of guys who can play at such a high level. I learned a lot from all of those players and those coaches.”

When Payton does decide to go pro, he’ll have a former professional athlete by his side to help him through the transition. His father, Elfrid Payton Sr., was a star defensive end in the Canadian Football League, playing from 1991 to 2004 and making seven All-Star appearances throughout his career. He was a two-time Grey Cup champion and was inducted into the Canadian Football Hall of Fame in 2010. He has tried to help his son during his ascent to stardom.

“I think I can help him with the whole process,” Payton Sr. said. “[My advice to him] has been, ‘Continue to work hard and stay humble.’ I’m real proud of him. I’m just glad that he’s been able to compete at a high level and continue to get better, more than anything.”

Payton Sr. recognized that his son had the potential to play college and professional ball at a young age.

“I realized that he could be a special player when he was 10 years old and playing up with the 11-year-olds and 12-year-olds,” Payton Sr. “He always had a good grasp on the game. He played football, basketball, baseball, soccer and ran track. He played everything. Whatever sport was being played, he’d go play it. [Around 2005], after Katrina, he decided that he wanted to play basketball exclusively.”

Payton fell in love with basketball when he was young, thanks to a tough guard who starred in Philadelphia.

“Allen Iverson, that was my favorite player growing up,” Payton said. “I watched him all the time. Now, I watch Chris Paul and Rajon Rondo. Those are the two guys who I watch and study now.”

Payton’s versatility allows him to impact a game in many ways. He can score, rebound, facilitate and defend. He believes his skills will allow him to have success in the NBA, whenever he decides to enter the league.

“I think my game will translate to the NBA because I do well in pick-and-roll situations, I can get up and down and I can defend. I think my biggest strengths are getting into the paint, making plays for other people and defending,” Payton said, while also acknowledging that he needs to continue working on “catch-and-shoot threes and free throws.”

This was a breakout season for Payton and he no longer has to worry about being overlooked. By putting up impressive numbers, having a number of jaw-dropping performances and leading the Ragin’ Cajuns to the NCAA Tournament, he has shown that he’s one of the best players in the nation.

The NBA awaits him, whenever he’s ready to make the jump from college to the pros.