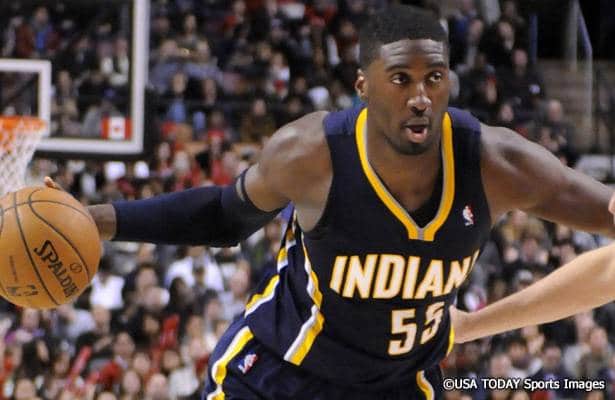 While the real-life NBA trade deadline is on February 20, the fantasy basketball trade deadline isn’t too far behind it, with the standard Yahoo! fantasy sports trade end date being March 6. That gives managers a little under a month to stack up their rosters for the homestretch and, hopefully, the playoffs, but there’s a lot that goes into making a fantasy basketball trade work, especially in 8-category or 9-category leagues.

There’s a lot of analysis that goes into making a truly fair trade because the manager initiating the negotiations has to look not only at his or her own needs, but at the needs of the person on the other end of the deal. You may have more points and rebounds than you know what to do with, but the guy leading the league in blocks isn’t trading you Roy Hibbert if they’ve also got plenty of guys that can score and rebound.

It’s honestly a lot of work in most leagues. I say most because there are an increasing number of year-after-year keeper leagues that allow the trading of draft picks, and in these leagues, all the complication of making a trade work goes away. You simply look through the rosters of the worst teams in your league, offer a future draft pick of reasonable value for a player you need, and you could end up with Roy Hibbert while also holding onto all of those points and rebounds.

On paper, this kind of deal looks like a no-brainer. Who wouldn’t surrender, say, a fourth-round pick in the next year’s draft in order to secure one of the league’s best shot-blockers?

But caveat emptor, gang. It’s terribly easy to sacrifice your next season in favor of your current one. The hypothetical deal mentioned above—a fourth rounder for Roy Hibbert—is reasonable. That manager would still have his top three picks next season, which is more than enough to build the foundations of another championship-caliber team.

I’m in one league, though, where this year the bottom three or four teams are major sellers and the top three or four teams are major buyers. Once I realized my season was going south, I shipped off every asset I had for draft picks, and I wasn’t the only manager to go that route. The problem is that the three or four guys at the top of the standings are doing all of the buying, and only one of them is going to win a championship. The rest of them are going to be very short on picks next fall, with no trophy to show for it.

For example, the manager in first place is undeniably stacked, with Kevin Love and Steph Curry anchoring his squad, but because of the trades he’s made for this year, the second pick he makes in next year’s draft will be in the fifth round. The second place team has a second-round and third-round pick left, but his third selection next season will be in round six, and his fourth selection will be in round eight.

It’s true that we play the game to win championships, and since there’s typically a reasonably-sized chunk of cash tied to that championship, fantasy managers have no reason not to go all-out in search of those prizes. The problem is that the next year they’re going to basically be donating their entrance fee, and take it from me, after selling off my entire team this year, I can verify that playing fantasy sports with cruddy players is no fun.

What is fun, though, is thinking about my draft next year, as I’ve got two first-round picks, two second-round picks, and two third-round picks on deck, making the first half-hour of my next draft both thrilling and stressful. But that’s the beauty of a league that allows for the trading of draft picks; rather than just stinking until the end of the season, bottom-feeding teams can build for the future. Conversely, true contenders can add pieces to their playoff roster without having to sacrifice any immediate assets.

But what should you do, if you’re in a league that allows for the trading of draft picks? How should you approach this wonderful little wrinkle in your fantasy basketball league this year?

Personally, I have never in my fantasy career downgraded my draft position for the following year. I’ll trade up for picks, but not down.

That said, I’ve never really been given a good reason to trade down. If I were contending and a last-place team was offering Kevin Durant for a first-rounder, I’d give it to him in a heartbeat. A halfway decent team that adds a player that good is almost a sure-thing to win the championship. For Durant or LeBron James or maybe even someone like Chris Paul or Stephen Curry or Kevin Love, a first-round pick is a pretty worthy gamble.

Do not trade your first-round pick for less than that.

In fact, don’t trade draft picks for players until just before the deadline. Wait until the last possible moment to ensure the picks you’re trying to get are as good as possible. I know this is even harder than waiting until the last 30 seconds to place a bid on an Ebay auction you want to win, but patience is paramount in getting the most value out of your draft pick.

When the time comes, this last place team is going to be shopping someone like Hibbert around the league: “I’m going to lose anyway, so you can have Hibbert for a second rounder.” The longer he dangles him out there, though, the antsier he’s going to get. If nobody is paying a second-rounder for Hibbert, that manager would still rather take a fourth-rounder for him than nothing.

Think of the player as an expiring contract. The Chicago Bulls, sensing they were going to lose Luol Deng in free agency, traded him for some mediocre draft picks, but those assets were more than they were going to get had he walked away for nothing over the summer. Bad teams trading good players for picks is exactly the same thing.

If you’re the seller, try to identify whether you’ve got a shot at making the playoffs relatively early in the season. If you really think you’re out of it, start the fire sale as early as possible. The earlier in the season you sell, the more teams that are potentially still competitive. If more teams are competitive, that means more teams are looking to buy, and you could ultimate charge a higher price. You also avoid the risk of your high-ticket players getting hurt before you can cash them out.

You can also try and pair guys up for a pick. If no one’s biting on Al Jefferson for a second-rounder, you can try packaging him with George Hill. Sweeten the pot. Whatever comes, though, do everything you can to finish the season with zero assets on your roster. Everything must go. Get what you can get while you can get it.

To conclude, trading future draft picks makes any fantasy sports league more entertaining, but it’s a tricky landscape to maneuver. You can really burn yourself if you’re not careful. Whether you’re floundering or flourishing, moving picks can completely alter the rest of this season and the entirety of next season. Whatever you do with them, make sure you’re doing it with plenty of forethought and strategy.