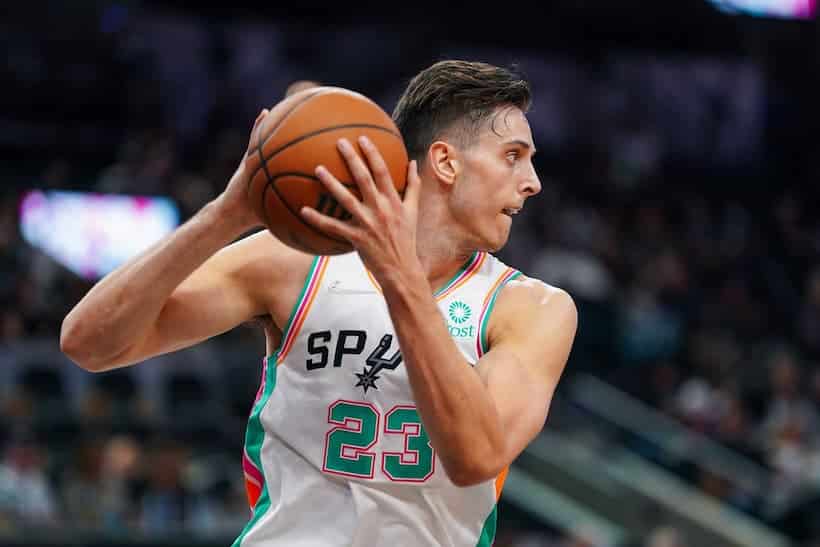 The Boston Celtics still remain the top team in the NBA with a league best 29-12 record. Jayson Tatum and the rest of their key players have all contributed to the Celtics success. No roster can ever be to complete and Boston are rumored to still be in the market to add some depth before the trade deadline. A former 2017 lottery pick has been linked to he Celtics in a potential trade.

Zach Collins was the tenth overall pick in the 2017 NBA draft by the Portland Trail Blazers. He spent three seasons with the Blazers before he became a member of the San Antonio Spurs in 2020-21. The Boston Celtics have been linked to Collins in trade talks and he could be a nice piece off the bench.

Massachusetts Sports Betting sites have the Celtics at (+400) to win the NBA Finals this season.

Zach Collins linked in trade talks with the Boston Celtics

In 30 games played and seven starts for the San Antonio Spurs this season, Collins is averaging (9.5) points, (5.7) rebounds, and (2.5) assists this season. He’s shooting the three ball at a solid 38 percent and is having a career-high year from the field at 56 percent for the season.

According to Bleacher Report’s Greg Swarts, Collins is one player that the Celtics might inquire about as they look to add depth to their frontcourt rotation.

“Adding one more frontcourt piece for depth would be ideal, especially as 36-year-old Al Horford is still averaging over 30 minutes a game…Collins is having a sneaky-good season for the San Antonio Spurs,” – Greg Swartz

Collins does not start for the Spurs as he has Jakob Poeltl ahead of him. Head coach Greg Popovich knows that Collins is a key part of the second unit for the Spurs. Boston could add players like Danilo Gallinari and Payton Prichard in a deal if they are serious about acquiring the Spurs big man.