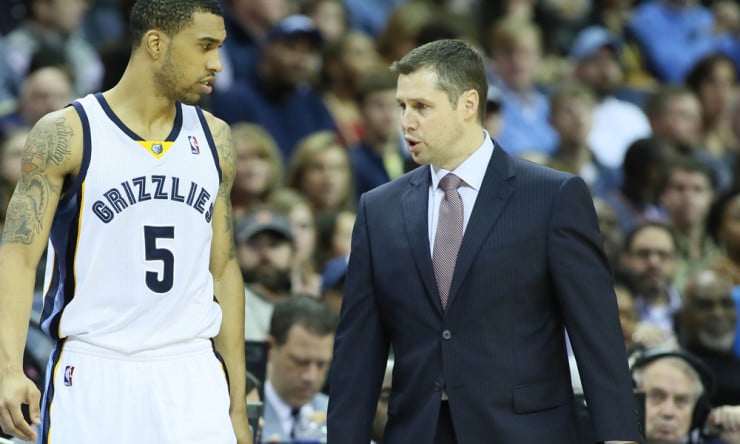 Facing elimination in Game 4, the Portland Trail Blazers put together a gritty performance and overcame a 10-point deficit in the final eight minutes to beat the Memphis Grizzlies, 99-92.

We have discussed in this space repeatedly about how the Memphis backcourt has been outplaying the Trail Blazers’, mostly because of the underwhelming play of point guard Damian Lillard. Well, with Mike Conley out of action after undergoing surgery to repair multiple facial fractures he suffered in Game 3, Lillard was able to finally get some space to knock down shots from the perimeter and effectively attack the rim. Lillard looked like himself for the first time this postseason, contributing 32 points, seven assists and two rebounds on Monday night. He also hit a huge three-pointer with two minutes left in the game and was fouled on the shot by Tony Allen. Lillard hit the free throw to put the Blazers up 88-86 with less than two minutes remaining.

Along with Lillard, C.J. McCollum put together a nice effort, finishing with 18 points, two assists and five rebounds while shooting eight-of-12 from the field and two-of-two from three-point range. McCollum was particularly big in the fourth quarter. In the closing minutes, McCollum dropped two layups and hit a clutch three-pointer, which put the Blazers ahead, 91-88.

While the improved play of Portland’s backcourt was a key factor in Game 4, the play of Meyers Leonard may have been the biggest difference for the Trail Blazers. Leonard contributed 13 points, 13 rebounds, two assists, one steal and shot five-of-six from the field and three-of-three from distance. Leonard played effective defense on Gasol and was a +23 for Portland in his 35 minutes of playing time.

Heading into Game 5, Portland will need to keep exploiting the absence of Conley while getting a well-rounded contribution from guys other than Lillard and LaMarcus Aldridge.

Calathes opened the game with two three-pointers and finished the game four-of-five from beyond-the-arc. Udrih was solid as well, contributing 13 points, three assists and one rebound while shooting five-of-10 from the field. But while both players were solid on offense, neither was able to play the sort of defense that Conley is capable of, which is partially why Lillard was able to break out for the first time in this series.

The Grizzlies got off to a slow start and trailed by seven points at the half. But the Trail Blazers went cold to start the second half (0-for-10), which Memphis took advantage of to go on a 16-two run. The Grizzlies outscored the Blazers by 14 points in the third quarter, but were unable to close out the game in the fourth.

Lillard and McCollum combined for 19 points in the fourth quarter and together outscored the entire Grizzlies’ team, which scored just 17 points in the final frame. It was the first time this series that Portland’s backcourt was able to have any kind of sustained success against Memphis, which could be a problem for the Grizzlies moving forward with Conley out indefinitely.

Marc Gasol and Zach Randolph had solid performances, though both admitted after the game that the team lost focus in the final quarter and failed to capitalize on a golden opportunity to move onto the next series.

Credit Portland for outperforming the Grizzlies late in the game and extending the series to a Game 5. However, with Memphis returning to their home court and feeling as though they gave away Game 4, expect the Grizzlies to come out with more focus and effort in Game 5. Unless Lillard and Aldridge have big-time performances in Memphis, the Grizzlies likely take Game 5 and close out the series on Wednesday.