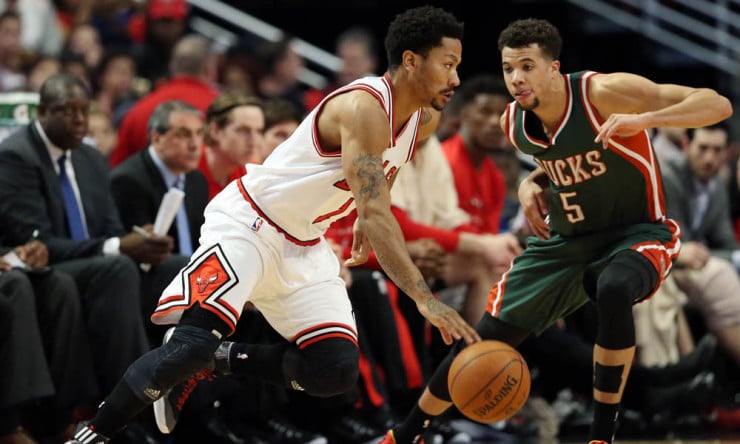 From the first few minutes of Game 5, it was clear that the Chicago Bulls would not be winning. It took them nearly five minutes to score their first points, and while they quickly went on an 11-0 run to take the lead early on, it just never felt like the kind of game that the Bulls were going to win. They were flat from “go” for the second game in a row, so it’s no real surprise that they’ve dropped the last two games of the series.

This one was exponentially more frustrating for the team than the previous loss, however, due in large part to Chicago committing some of the silliest turnovers of their postseason, half of which (six) came at the hands of Derrick Rose. The Bulls star had his worst game of the series, putting up only 13 points of 5-of-20 shooting and allowing the offensively incapable Michael Carter-Williams to do whatever he wanted. Chicago cut the turnovers down to 12, but Rose ran the show about as poorly as he has done all postseason. It wasn’t pretty.

Joakim Noah was more active and more involved than he has been in the first four games of the series, but he missed enough bunnies that it almost got to be a joke by the end of the game. Between Noah’s botched layups and Rose’s insanely silly turnovers, the Bulls just played a broken game.

To win Game 6, the Bulls have to be smarter with the ball and a whole lot better on defense. They’re missing the hunger they had in Game 1. If they can’t find that again, Milwaukee won’t stop causing them headaches.

Michael Carter-Williams clearly was the star of Game 5, returning from an ankle injury to score 22 points to go along with nine assists, eight rebounds and three blocks. Most of those points came from muscling Rose into the lane and firing up little floating bank shots from inside 10 feet. When he spot up and shot the ball, it was as ugly as it usually is, but somehow tonight the young man got cooking. He was aggressive on offense, displaying a side to his game he doesn’t often show. It’s still hard to believe he can do that consistently, but if Rose is giving up that shot in perpetuity, there’s no reason for Milwaukee not to go right back to it.

Beyond him, though, Khris Middleton continued his role as the team’s MVP throughout this series. He scored 21 points himself and once again was the most diverse and aggressive scorer on the roster. The big story here, though, was the defense – just as it has been for them all season long. They got Chicago to do stupid, stupid things, and that’s what ultimately won them the game.

So far, Jason Kidd has made nice adjustments after losing the first three games of the series. Game 6 will be at home for his young Bucks, and his team has to win. If they do what they’ve done for two games now, they’ll have a reasonable shot at doing that.

The Bulls are going to win this series eventually, but at this point it’s pretty obvious that the Bucks have all the momentum. Chicago is in a slump offensively, but that can break loose at any minute. Expect a more hard-nosed defensive effort from the Bulls in Game 6 and a “road” win in front of a Bradley Center crowd that’s half red.